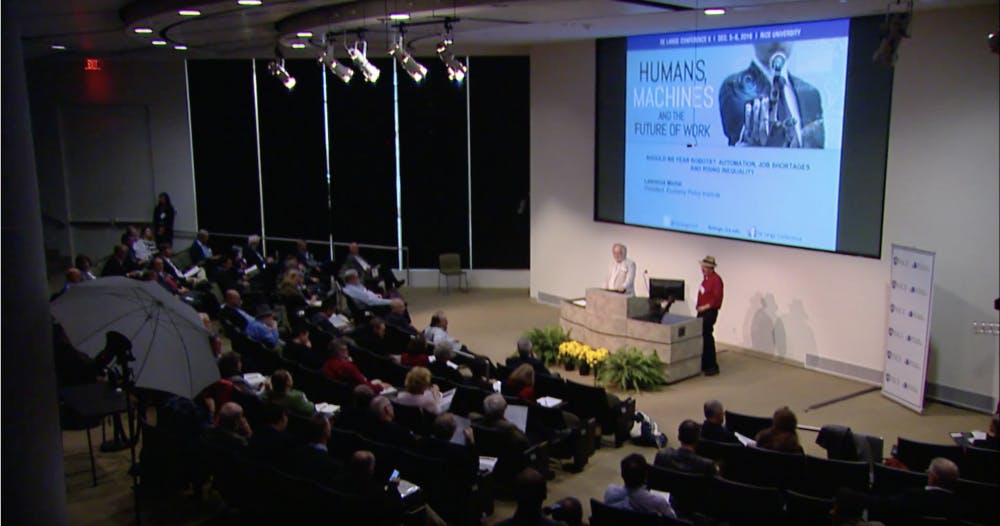 While most Rice students were studying for finals in early December, a collection of entrepreneurs, academics and researchers gathered at the BioSciences Research Collaborative for three days to discuss the future impact of automation and artificial intelligence on human work in the De Lange Conference X, entitled “Humans, Machines and the Future of Work.”

“To me, it’s the university at its best,” Rice President David Leebron said. “What [conference chair Moshe Vardi] and the conference committee did here is bring people from all different disciplines to think about a problem that can only be addressed through multiple disciplines.”

Leebron, who delivered short opening and closing remarks, said collaborative events like the conference were one of the reasons why he wanted to come to Rice.

“Rice’s advantage is we’re a small university and people can easily reach out and want to be engaged in this kind of dialogue,” Leebron said. “Just now, I had people come up to me from other universities, from much bigger universities, and say they’re amazed at the spirit of the institution that’s reflected in a conference like this.”

Vardi, a professor of computer science who conducts research in automated reasoning, said he originally became interested in the social impact of AI in 2011, when IBM Watson, a computer system capable of responding to questions in natural language, won Jeopardy. Vardi submitted his proposal for the conference’s theme, which was ultimately chosen as the finalist, to the conference Steering Committee in fall 2014.

Vardi said the conference exceeded his expectations, covering both the importance and complexity of the developing effects of automation on work.

“The academic world tend to be highly specialized, so you almost never hear in the same meeting such a span of speakers, from technology to philosophy,” Vardi said. “Hearing such a broad range of speakers was an intellectual feast.”

Duncan College junior Dan Burke, who attended the conference out of personal interest, said he was surprised by the disagreement among some speakers.

“Some felt that the future of work would be relatively unchanged by automation, while others expressed the opposite,” he said. “The takeaway that anyone could find useful is that AI is going to spread throughout society and the workplace, and we need to be ready for its impact.”

Vardi said he has mixed feelings about the societal outcomes of increasing automation.

“I am a short-term pessimist and a long-term optimist,” he said. “People dislike major changes, so it is very hard to bring about major societal shifts. When when forced to, however, humanity is both resilient and resourceful.”

Vardi listed employment safety nets, education, and corporate incentivization as policies which he believes will be the subject of conversation and experimentation in coming years. In order to continue a national policy discussion, Vardi said he plans to organize a summit in Washington, DC in the fall.

The DeLange Conference series has been held every two to four years since 1991, according to the conference website. Other recent conference topics include “The Future of the Research University in a Global Age” in 2012 and “Transforming the Metropolis: Creating Sustainable and Humane Cities” in 2009.