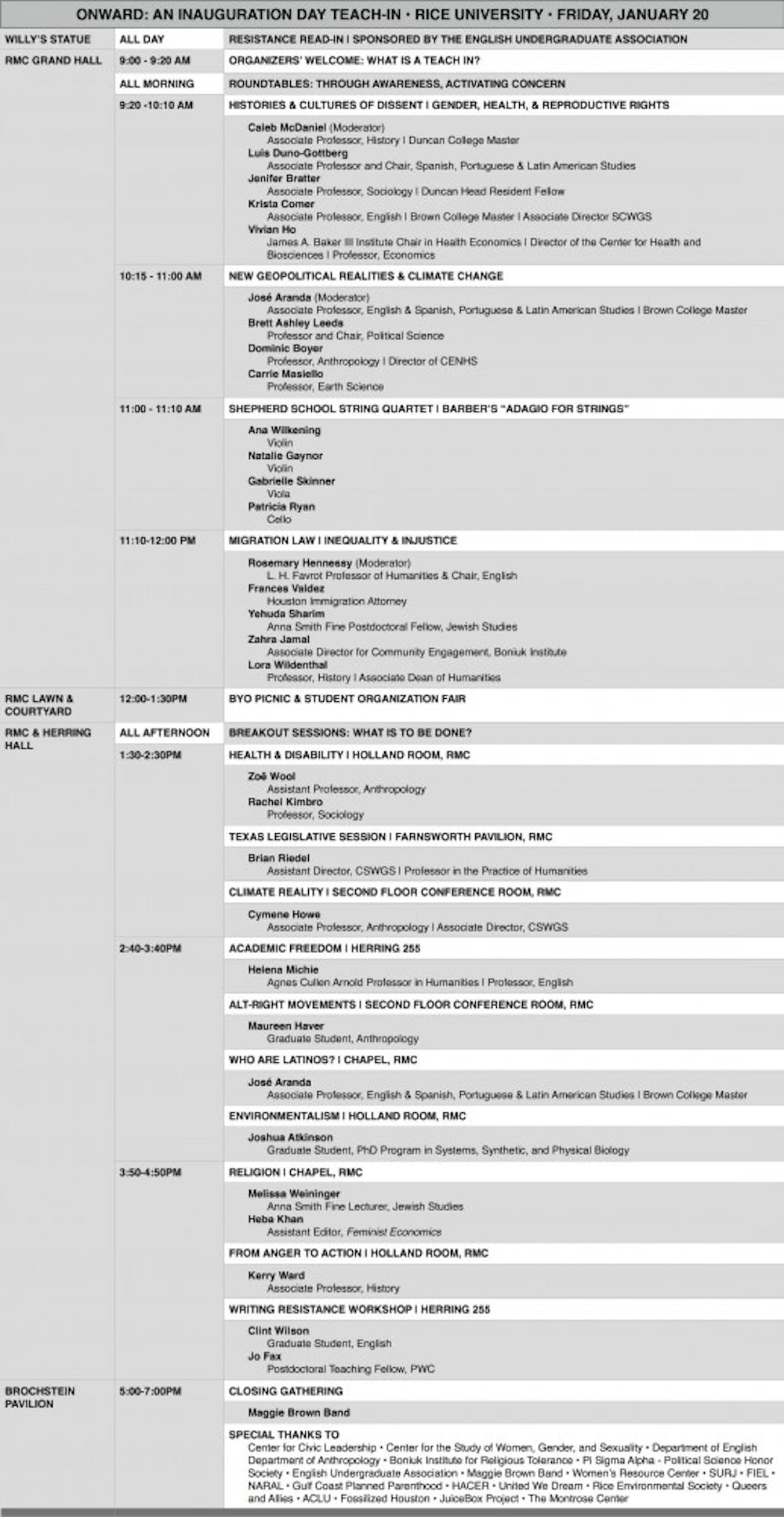 As Donald Trump takes the oath of office in Washington, DC, three events at Rice will mark the event: a teach-in, a read-in and a watch party.

The teach-in, which is a workshop consisting of roundtables and breakout sessions, seeks to educate and engage students on politically charged topics, said Anthropology professor and co-organizer Zoë Wool. The read-in is intended as a form a resistance, a way for students to speak up against the negative implications of the election, said Wiess sophomore Steffannie Alter, who has been involved in planning the event. The watch party is hosted by The College Republicans who decided to host the event when they realized no campus groups planned to show the inauguration, according to club president Kyle Sheehan.

English professor Lacy Johnson and Wool are co-organizers for the teach-in, which is name “Onward: An Inauguration Day Teach-in.” The day will consist of round table discussions, a lunch break that includes poetry and art and breakout sessions in the afternoons. The event is not intended as a protest, Johnson said; rather, it is meant to start discussions surrounding controversial political issues.

Wool, a McMurtry College associate, had long wanted to increase discussion within the colleges about contemporary issues and give students an opportunity to connect coursework and their individual lives to contemporary controversial issues, including the refugee crisis in the Middle East and the Black Lives Matter movement.

The day after the election, Johnson posed the idea for a teach-in. Since then, Johnson and Wool have been coordinating with other Rice faculty members about the event, which lacks a formal planning committee but has been largely organized by Wool, Johnson and seven other professors.

A teach-in is an event, often at a university, where concerned community members come together outside of the classroom to teach and learn collectively about matters of urgent historical, political, and social concern, Johnson said. The intention is to include a wide variety of perspectives and topics.

“It’s a kind of unruly information blast, and it builds on traditions of socially conscious teaching,” Wool said.

Johnson said another key motivation was Rice President David Leebron’s Thresher op-ed and post-election email encouraging Rice students and faculty to do the difficult work of having conversations about politically charged topics.

According to English professor Krista Comer, who is involved in organizing the event, more faculty members volunteered to teach than the schedule could accommodate.

The round table format, which includes professors who are experts in a variety of politically relevant fields, will facilitate these connections. Breakout sessions delve deeper into certain issues and are intended to help students figure out how they can act on these issues, both at Rice and beyond.

The lunch session will be much more informal and social, intended to give students and student groups an opportunity to meet each other and network, Johnson said. Comer has been in charge of student outreach, and she is currently coordinating with student groups like HACER and the Rice Women’s Resource Center. Groups who are interested will have the opportunity to set up booths in the courtyard beyond the Rice Memorial Center.

“This is a non-partisan event and all organizations are welcome,” Comer said.

Comer has also been involved in reaching out to students through the Student Association and through the residential college system, and she said that students have been interested and enthusiastic.

“The idea that students at Rice are apathetic isn’t true,” Comer said.

Students on the leadership board of the English Undergraduate Association have organized the Resistance Read-in, which is intended to promote dissent against Trump and the ideas he has come to represent, said Alter, a board member who helped organize the event.

According to Alter, board member of the English Undergraduate Association, the read-in will occur from 10 a.m. to 2 p.m. at Willy’s Statue, with the goal of representing the groups that have been marginalized during the campaign and providing a voice for people who feel like there’s no way for them to be heard.

“We have been avoiding using the word protest because we’re not trying to change an outcome so much as showing the student body the importance of resisting some of the negative implications and provide a voice counter to what we think the inauguration will be representing,” Alter said. “We want to make sure that we don’t have to be complicit in something we don’t agree with.”

The timeframe has been divided into five-minute increments, and while Alter said she is expecting most people will read published works, students are also welcome to read their own pieces.

Alter said the organizers are hoping people will chose works that are meaningful to them, especially those about political engagement, democratic sentiment, or groups they wish to highlight.

To broadcast the readings across the quad, the group is borrowing a sound system, hoping that people will pause and listen to some of what’s being read.

“Choosing to participate instead of remain silent is exactly the sort of reminder we need,” Alter said.

The College Republicans decided to host a watch party when they realized no other groups on campus were planning to show the event, which was not a surprise, according to Sheehan. While there will not be a formal discussion, Sheehan expects that those who watch the inauguration will share their thoughts throughout the broadcast.

“With any new president, there’s both hope and apprehension,” Sheehan, a Lovett College junior, said. “And while Trump has been controversial throughout the campaign, I would hope that on the day of inauguration, we bring the best parts of America together.”

Since the College Republicans voted not to endorse Trump, Sheehan said that he would not consider the inauguration to be a watershed moment for the club. According to Sheehan, Jan. 20 ushers in at least two years of Republican control, as well as a noteworthy American tradition.

Sheehan said he would not be offended if Rice groups held events protesting Trump, but he thought that the teach-in event’s description of non-partisanship was flawed.

“I 1,000 percent guarantee that if Hillary Clinton were being inaugurated, non-partisan groups would be showing the event,” Sheehan said.

Sheehan said that his exposure to the other events on campus, the teach-in and the read-in, has been limited but that he supports their right to assemble and voice their thoughts.

“In a sense, the more the merrier in terms of political events on campus,” Sheehan said. “But it’s hard for me to believe that it’s not an anti-Trump event given the timing.”