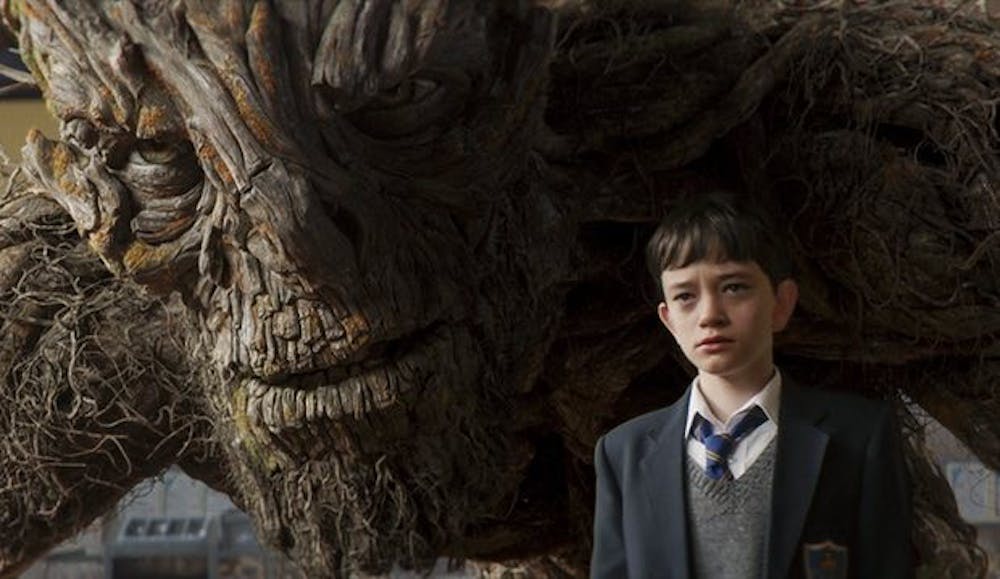 In coming-of-age films, the teenage protagonists usually find themselves straddling the abyss, one foot firmly in the ignorant bliss of childhood and the other foot in the unfamiliar confusion of the adult world. J.A. Bayona’s “A Monster Calls” differs in that its barely teenage protagonist has been prematurely foisted into the adult world. But, because of the overwhelmingly mature nature of what he has experienced, he cannot return to the world of children. Though it has elements of fantasy, “A Monster Calls” isn’t afraid to look into the darkness that can suddenly plague any child’s life and acknowledge that, even for young people, life can become complicated.

Conor O’Malley, a talented artist, is bullied on a daily basis by the same group of cruel kids. At home, his young mother is bedridden as she dies of cancer. Because of his parents’ separation years ago, Conor will live with his grandmother, an icy real estate agent. Terrified of the prospect of a motherless future but in denial that his mother will eventually succumb to her illness, Conor summons a monster to set things right again. But the monster knows from the beginning that Conor’s definition of setting things right again might not be what’s best for the boy.

Regardless of their screen time, the film’s intimate cast produces some powerfully raw moments that are hard to shake off but quite beautiful at the same time. Felicity Jones, as Conor’s ailing but eternally loving mother, is so present during each of her scenes. Her power as an actress is rooted in that honesty. Jones communicates the woman’s contentment with her life, rooted in her affection for her son. As the mother, Felicity’s only regret is that she won’t live to see her son grow up to be the good man she’s raised him to be, which makes the scenes of her impending demise so difficult to watch.

Sigourney Weaver as the grandmother turns out to be much more than the two-dimensional villain Conor imagines her to be. Though she doesn’t instantly warm up to her grandson, the bitter root of her anguish- and Conor’s anger- is the imminent loss of her daughter, the boy’s mother. The grandmother feels just as lost as her grandson, knowing that she will outlive her own daughter, and, as a result, both parties lash out at the ones they love at times.

Liam Neeson is magnificent as the Monster, for which he provides the voice and the motion-capture. Neeson’s trademark northern Irish bass gives the Monster undeniable presence. Sometimes, the Monster comforts Conor, like a father concerned about his son. Other times, he gruffly attempts to force the boy to confront the one truth he doesn’t want to admit. Furthermore, the film’s animation and visual effects teams deserve an enormous amount of praise for rendering the Monster in such a grounded way. Combining motion capture, practical effects and CGI, this is one monster that genuinely feels like a creature that could indeed exist in the real world. The CGI isn’t there to win a pageant; it’s there to simply assist in telling a story. It works because it’s subtle in doing its job and then gets out of the way when it needs to.

Lewis MacDougall, only 12 years old and with one film credit (2015’s Pan) at the time of principal photography, is the film’s real revelation. In a mind-blowing performance, given his age and experience, MacDougall is gripping, delivering pitch-perfectly in terms of his character’s tangled myriad of strong emotions, without being melodramatic or overly sentimental. MacDougall doesn’t feel like a child actor playing a kid; he feels like a kid playing a kid. As a result, it becomes both easier and harder to take Conor’s journey, emotional baggage included.

This is one of those films where crying a lot feels unashamedly good for the soul. What makes “A Monster Calls” feel so truly real is that it captures the unfair randomness that can happen to any of us. Though we may never understand why such things happen, the film reassures us that we can make it through the pain to continue our way through the walk of life.