'Very Pleasant Transit Center': A comforting image of the future 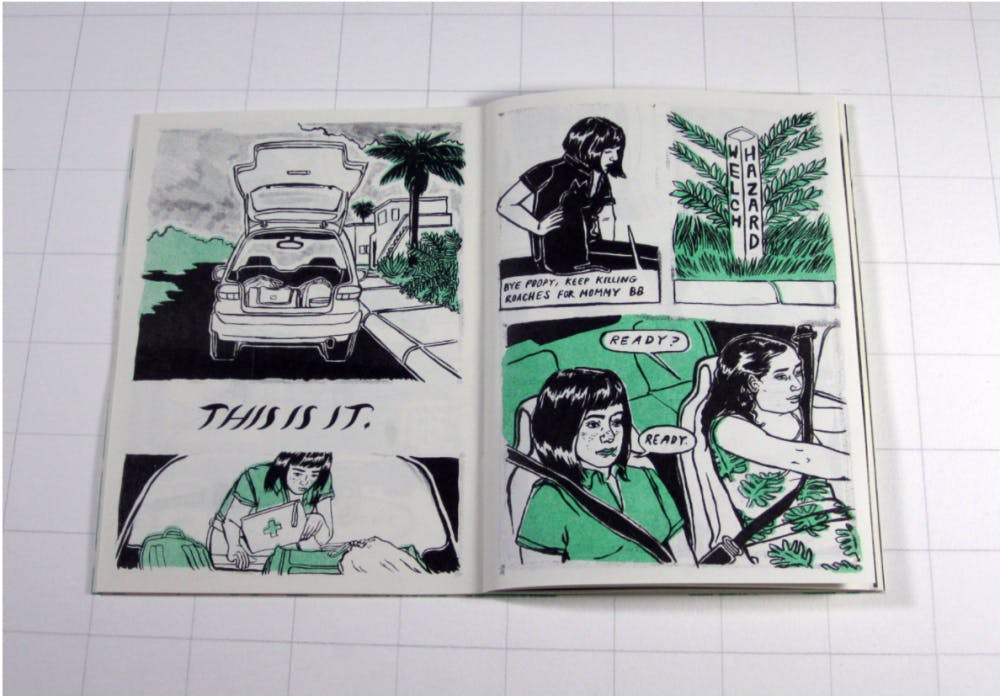 The transition from sheltered university life to the world outside is marked with considerable anxiety, as the first time many will feel that they don’t have a distinct next step, a plan for success. The fear surrounding this is something we at Rice tend to shove aside, but Sarah Welch, a Houston-based graphic novelist, attempts to bring this emotion to the forefront. In “Very Pleasant Transit Center,” the fourth installment of her comic book series “Endless Monsoon,” Welch captures this youthful state of uncertainty.

“Endless Monsoon” focuses on two female protagonists in their early 20s, living in an exaggerated version of the Gulf Coast. They grapple with the emotional and economic struggles of entering adulthood. Welch began creating graphic novels herself at the same age, influenced mainly by other women graphic novelists that she met in art school. She pulled from this influence, and from the experiences of her friends and her own life in the making of “Very Pleasant Transit Center.”

Welch carefully frames each scene to depict in detail the mundane scenes of young adult life. The pacing is purposefully slow, lingering on the minute details of the protagonists’ experiences and delineating in captions specific sensory detail which visual media cannot (the sense of smell, for example) capture. For this reason, Welch is attracted to the graphic novel, which allows her to deliberately influence the experience of the reader.

“It is similar to filmmaking,” Welch said. “I can take full control over both the aesthetics and the story itself.”

Welch’s relationship with her work is very much about controlling the final product. She controls her art’s creation from conception to production and even owns the Risograph on which the copies are printed. The narrative she imagines is very detailed and atypical, purposely subverting the expectation of a driving plot, of rising and falling action. The characters are trapped in a rut throughout the story, continually ending up where they began. Even within the series as a whole, the plot is nebulous, each installment standing more or less alone. In this installment, Welch focuses on existing in transitional space, neither here nor there. She depicts this in her portrayal of the characters’ lives and the literal space of the transit center.

The artist pulls from her own experience and that of friends in “Very Pleasant Transit Center.” Welch herself, who has a visual impairment and resultantly cannot drive, spends a lot of time at transit centers.

“They all have very idyllic names, but none of them are very nice places to be,” Welch said. “The name [Very Pleasant Transit Center] is an ironic joke about transit centers. But, it’s also about finding some kind of peace within a non-place. It’s about finding a way to make an unpleasant experience pleasant.”

Most of us at Rice are nearing the age of the characters in“Very Pleasant Transit Center.” The idea of entering the “real world” is met with a feeling of both excitement and trepidation. The threat of isolation is certainly frightening, of a world in which your closest friends are no longer just a few doors down. “Very Pleasant Transit Center” manages at once to both stimulate and quell this fear. The protagonists experience this isolation, but their close friendship and shared vision for the future provide a redeeming solace.

We are technically adults, but we still haven’t fully experienced the tedium described in the book, the routine of adult daily life and adult obligations. We are aware of the threat of dormancy and stagnation even if it isn’t currently upon us. “Very Pleasant Transit Center” confronts these feelings of hopelessness with a message of empowerment that is neither saccharine nor false. Further, it doesn’t attempt to sum up the current sociopolitical zeitgeist into one overarching experience of youth. The work is relatable, specific in its scope and, despite the comic’s emphasis on life's drudgery, each moment feels ephemeral and intimate.