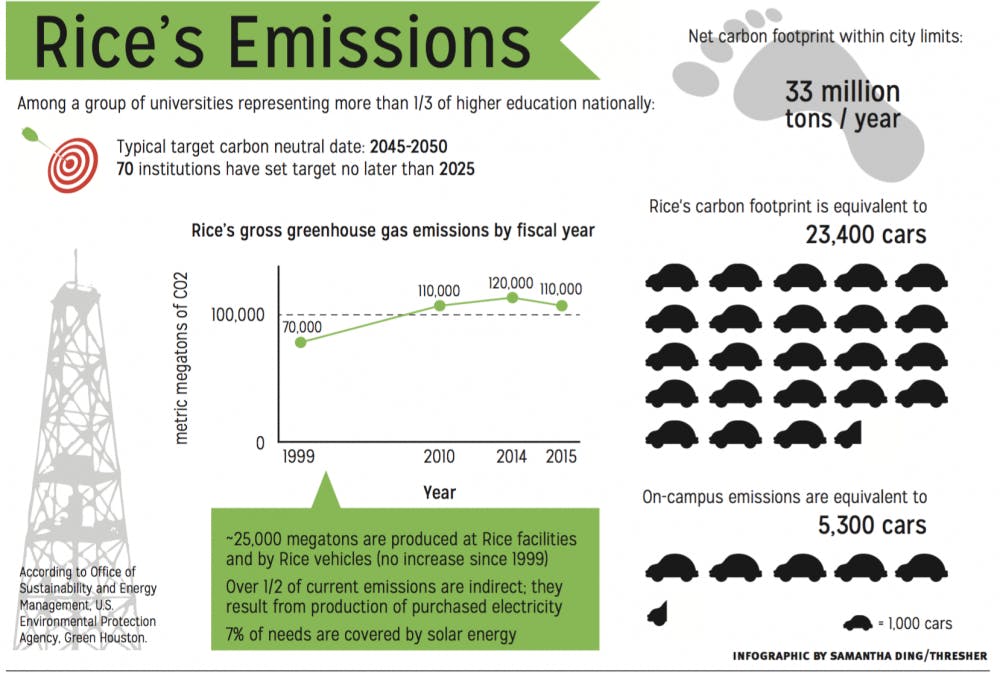 With energy efficiency playing a central role in both environmental and economic discussions, Rice University has taken steps to limit both its carbon footprint and the economic toll of inefficient energy usage.

Director of Sustainability Richard Johnson said Rice takes part in voluntary programs that reduce electricity output during key times, which have totaled $399,405 in revenue and savings.

One of these programs, the Emergency Response Service-30, calls Rice from the Electric Reliability Council of Texas during high amounts of energy use and allows 30 minutes for Rice to reduce usage by typically three megawatts. Another program, Load Share, focuses on reducing energy during the summer months, and the Four Coincidental Peaks Program assigns Rice peak charges during those summer months.

“The incentive to customers like Rice is to anticipate when peaks will occur and to do everything possible to lower consumption,” Johnson said. “This is a challenge, but guessing correctly for even one month means a savings of tens of thousands on next year’s electricity bill.”

According to Johnson, the largest money saver came when the Administrative Center for Energy and Sustainability shifted from purchasing electricity per kilowatt-hour at a flat rate to a model where price varies in accordance with Rice’s electricity consumption. A recent study revealed that during an 18-month period, this model saved Rice $1.6 million.

Director of Plant Operations Hugh Ton-That said Rice has been working to improve its sustainability by upgrading energy sources such as the solar turbine.

“This year my goal is to reduce another 4 percent on the electrical and natural gas usage by just tweaking equipment,” Ton-That said.

Ton-That said central plant’s decision last year to warm the boilers, the largest source of emissions, just once a week as opposed to every day has saved up to 50 percent on natural gas use.

Cogeneration, in which power and steam are produced simultaneously, is another recent addition to Rice’s energy saving practices. Cogeneration reduces the power produced by Rice to 20 to 25 percent of what is needed for the university and prevents steam from being wasted.

A group that helps measure facilities use, Sightlines, recently compared Rice to similar universities in terms of climate, institution size, and levels of lab research. They found Rice consumes 12 percent less energy per square foot than the average of its peer universities.

“If an efficient building is like driving a new car, these older buildings can be like steering a bumper car,” Johnson said. “Replacing this old equipment can be costly. We have buildings designed when energy conservation was not a big consideration.”

Ton-That said the recent growth in size of the student body increased our energy output.

“They’re going to require more air conditioning, more heating of the building and they use more water,” Ton-That said. “So we’ve seen an increase the last 10 years in the increased energy consumption by the larger student body.”

According to Johnson, the best way for students to limit their environmental and financial impact is to manage their air conditioning use.

“Every degree below 74 for cooling costs us about 4 percent more, so if someone sets their air conditioner to 68 degrees, it will cost nearly 25 percent more,” Johnson said. “That expense is built in to future housing costs, which the students pay for.”

In addition to efforts at the administrative level, Rice students are engaged in initiatives to lessen the campus impact on the environment. Jordan Bulanda, president of the environmental club, said the club’s recycling efforts include installing permanent bins at athletic facilities and creating a contact for Rice students to report any instances where Housing and Dining is inconsistent with recycling policies. In addition, the club will host a Food Waste Competition with a social media competition aspect next week.