From the editor's desk to the sports section: My first foray into football 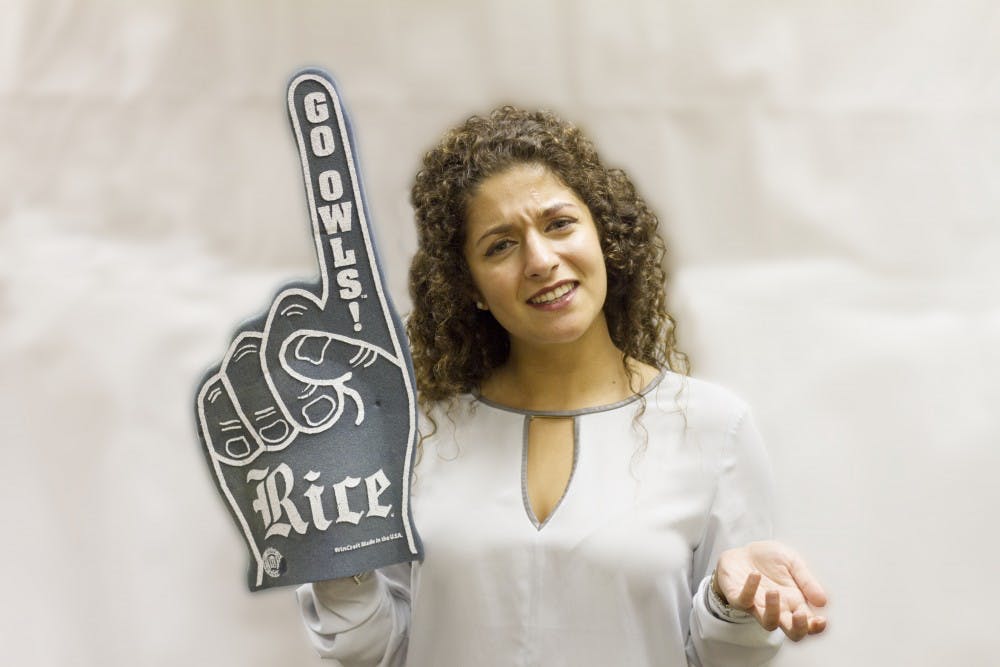 For the past six months since I’ve gotten my MacBook fixed, the default login logo above my username has been a stock photo of a football. Somehow, even though I use my laptop almost every day, I didn’t notice this football staring back at me until Thresher News Editor Drew Keller pointed it out last Saturday. This just goes to show how little my mind registers anything football related. Prior to last week, I had never watched a single football game. I didn’t know what a touchdown or a play was, what a quarterback was supposed to do or really anything about how this multibillion-dollar industry centered around brain damage operated.

The weather conditions on game day were far from ideal, but I was thankfully spared from the rainy cold as I watched the game from the comfort of the press box, complete with a dinner buffet. Oh, to be the media elite.

And so the game commenced. While most people could probably already foresee Stanford’s victory, a small part of me was rooting for a Rice upset of Trump-ish proportions. No such upset occurred, and Hillary Clinton (who symbolizes Stanford running back Christian McCaffrey if the universe is functioning properly) preserved the status quo. My newfound, thorough understanding of the game leads me to conclude that the Rice football team needs to catch better and run faster. Coach Bailiff, are you taking notes?

The halftime show inexplicably began with a group of small children playing flag football, presumably because they’re a bunch of fucking snowflakes who can’t handle the real deal. Stunningly competent journalists that we are, Drew and I missed the rest of the halftime show, as we were otherwise preoccupied with sneaking into the Stanford alumni VIP lounge in search of David Leebron. I mean, it’s not like anything newsworthy ever happens at a halftime show, and we figured our president was more likely to be schmoozing with Rich White People than kicking it with the plebes in the rainy stands. Alas, there was no Leebz to be found, and we were promptly kicked out of the VIP box. I suspect it was Drew’s Rice hat and T-shirt that gave us away. Well, there goes his salary.

Despite my cynicism, I emerged from my first experience of attending a football game with tremendous respect for the athletes who put in so much time and devotion into improving their craft. The sadness in coach Bailiff’s eyes in the post-game media conference almost broke my heart. He looked like a large, depressed teddy bear, and I genuinely wanted to give him a hug.

Though I have a better understanding of how the game works (now I know what a touchdown is!), I don’t think I’ll ever subscribe to the hype, as it were. Sportsball is just not my thing, and football, which falls under the broader umbrella of sportsball in my athletically disinclined mind, is no exception. So, it should be no surprise that later the same evening I watched reruns of Downton Abbey, because at the end of the day if I’m going to watch veiled displays of homoeroticism, I’d prefer they be set in post-Edwardian Britain. Go Owls!