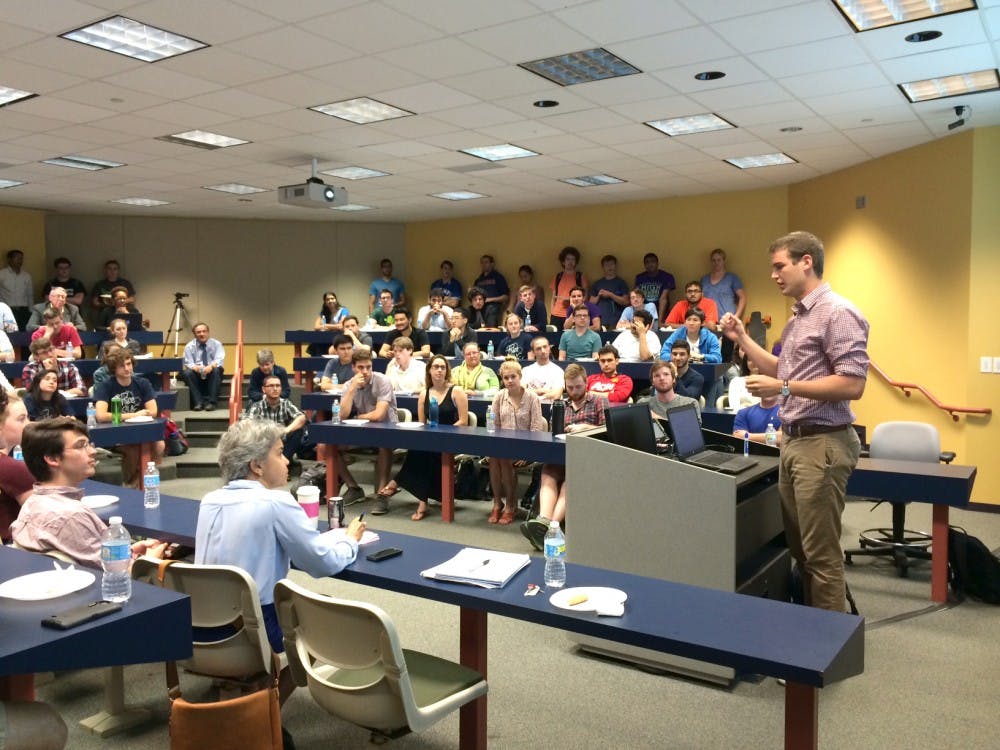 Mechanical engineering faculty and students discussed departmental weaknesses and ways to improve the undergraduate experience during the MECH Department Town Hall Meeting organized by the Rice MECH Advisory Board on Friday. The four key areas of focus were the classroom experience, research experience, organization of labs and job opportunities.

“I understand that there is probably a lot of frustration in this room, there might even be anger in this room, but please know that everyone in here is on your side of this,” Schaefer said. “We want to have a better, stronger, more resilient, more student-serving department as well.”

Schaefer said one major change implemented by the department is that every undergraduate course is taught by a full-time faculty member.

“Those faculty members are making sacrifices,” Schaefer said. “All our senior faculty are taking an overload. They are doing more work than the university requires of them to teach these classes.”

The department also added three new faculty members, Pedram Hassanzedah, Fred Higgs and Matthew Brake, but class size remains a concern among students. Brake, who recently served as an adjunct research assistant at the University of New Mexico, said Rice has made classes smaller through what he described as an unorthodox approach of offering several lectures for core courses such as Engineering Mechanics (MECH 211).

“What seems like it should be an easy solution, from the students’ perspective, would be to hire more faculty to share that work load,” Brake said. “But, the political aspect of it is that that’s a very challenging feat for the administration to accomplish. Efforts such as these town halls go a long way to help build a case for us to grow the department and to have more full-time faculty available to teach.”

Andrew Gatherer, a member of the MECH Advisory Board, described the difficulties of getting funding directly to the MECH department. Gatherer said funds are sent to the school of Engineering, where the Dean of Engineering determines how to divide funds between departments.

“We have to stand together in response to the administration to ensure that sustainable, long lasting change is enacted,” Gatherer, a Brown College junior, said.

Clark Zha, a Will Rice College junior and MECH student, suggested a standardized system where faculty provide information about how many students they are looking for and what skills are desirable, so students can apply. Zha also suggested a program where upperclassmen mentor freshmen and sophomores.

MECH students at the Town Hall voiced discontent with the current state of labs, citing that labs are often difficult to understand and are out of sync with the material learned in courses. One popular solution was to give students the opportunity to rewrite labs for extra credit.

Colin Feng, a senior MECH student, said although he already finds many labs frustrating due to the lack of an interactive component, rewritten labs could spare students the additional frustration of trying to understand instructions.

“With students writing [the labs], who have taken the lab and know what the lab manual wants, the revisions should be much clearer and more appropriate for future students,” Feng, a Duncan senior, said.

A second suggestion by Nicholas Sepulveda, a Weiss College junior, was to make labs more applicable to the real world and relate to the automotive and aeronautical sectors.

Justin Bernard, a Jones College junior, said labs could be used as an opportunity for MECH students to explore different career paths given the broad nature of the major.

When discussing the topic of careers, students raised the possibility of increasing the number of recruiters from companies outside of oil and gas that come to Rice, citing Texas A&M, which has a career fair dedicated to mechanical engineers.

Dean of Engineering Ned Thomas said this difference is explained by Rice’s smaller size, with some companies choosing larger universities where they can conduct hundreds of interviews.

A solution Schaefer offered is publicizing opportunities such as the Asian American Engineering Conference, which is open to students of all backgrounds as a networking opportunity.

Moving forward, Schaefer said the MECH department will continue to discuss the classroom experience and undergraduate research, as well as work to increase the amount of faculty.

“I am enormously proud of the MECH undergraduates,” Schaefer said. “These students aren’t just complaining, but are working hard to bring about positive change.”