‘Into the Inferno’ tackles human fascination with fire 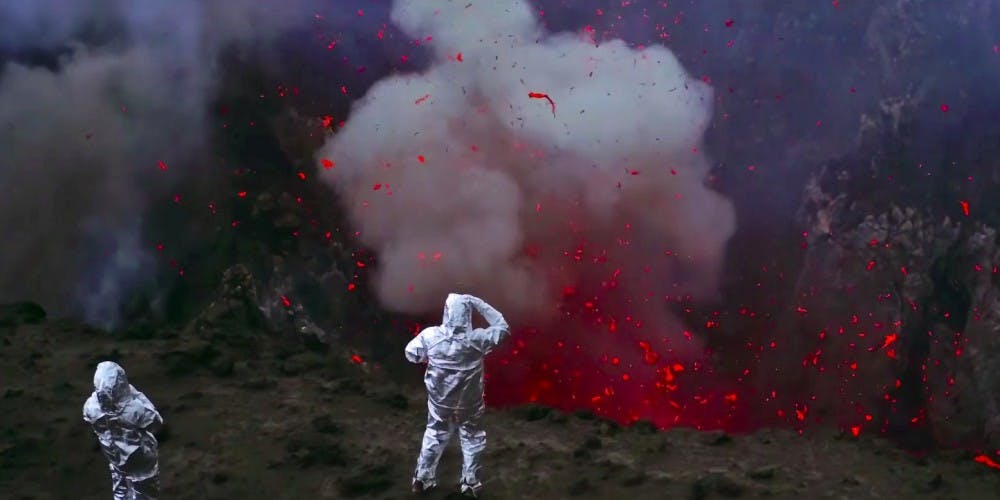 Werner Herzog is one of the most daring filmmakers of all time. From dragging a steamboat across a mountain to forging shooting permits to hypnotizing his actors, Herzog will seemingly do almost anything for the sake of his art. In his newest documentary Into the Inferno, which was recently released on Netflix, the now 74-year-old director demonstrates that he has not lost any of the ambition or nerve that made him famous.

Made in collaboration with volcanologist Clive Oppenheimer, Herzog’s “Into the Inferno” studies the belief systems that have formed around volcanoes rather than focusing on the volcanoes themselves. Herzog, while obviously fascinated with the great power of the volcanoes, cares more about the human relations to the fiery mountains. Traveling across the world to Indonesia, Ethiopia, Iceland and — most shockingly — North Korea, the team of Herzog and Oppenheimer interview fascinating people. The most interesting, relevant subjects to the film’s greater topic were the interviewed Indonesian tribal chiefs who spoke about their tribes’ volcano-based religions. Beliefs in spirits living within the volcano or an American Christlike figure who will one day emerge from the volcano are only some of the interesting tidbits from Herzog and Oppenheimer’s findings.The world’s most heavily volcano populated nation, Indonesia retains these volcano-based belief systems despite the country’s predominantly Muslim identity.

Some of the film’s other greatest strengths were its stunning cinematography as well as its inclusion of Herzog’s now-iconic voice as narration. Gorgeous shots of the three volcanoes in the world with visible magma are overlaid with operatic music to create a hauntingly beautiful effect. Combined with the poeticism of Herzog’s narration and the almost-madman intelligence pouring out from his voice, the documentary has moments that truly astound in their power. These moments simultaneously show both the beauty and destructive force of the planet, a remarkable visual feat that only Herzog seems to be able to pull off with such regularity.

There are segments of the documentary that don’t feel entirely necessary, though they are interesting and would certainly fit well in other documentaries. In their visit to Ethiopia, Oppenheimer and Herzog embark on an archeological dig of a 100,000-year-old hominid with an eccentric professor from the University of California, Berkeley. Few connections can be made between this portion of the film and the greater theme of volcanoes.The other portion of the film that does not feel completely cohesive is the North Korean segment. While Herzog and Oppenheimer do ask about the significance of a certain volcanic crater considered to be the traditional birthplace of the Korean people, much of this segment also highlights the propagandist image the North Korean government crafts. While the topic is fascinating it does not entirely fit.

Overall, “Into the Inferno” is another in a long line of compelling documentaries from Herzog. Though it does drift in focus, the exploration of volcanoes incredible power as well as their effect on different peoples makes this feature worthwhile.