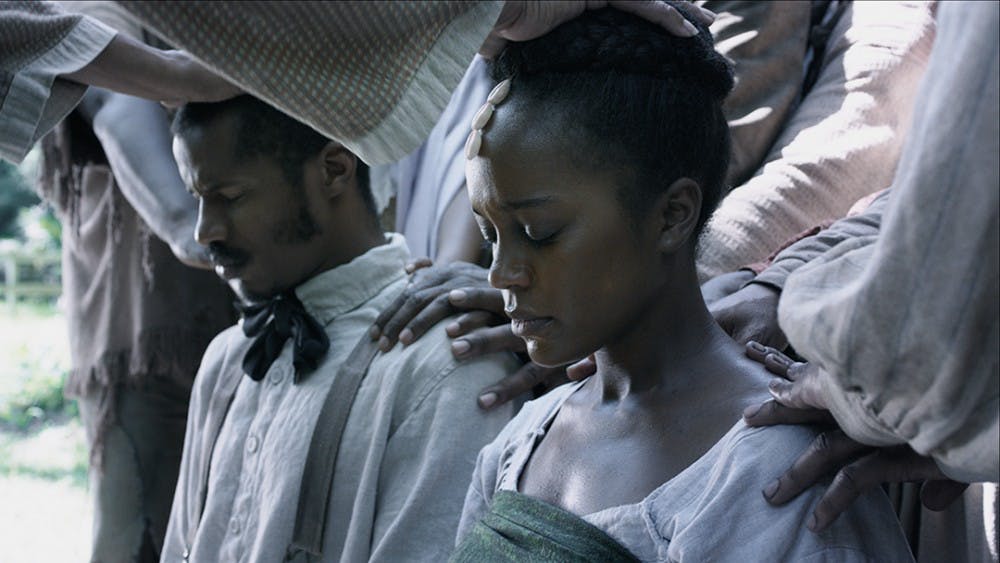 After my preview screening for “The Birth of a Nation,” a viewer remarked that it portrayed an event that “you don’t learn about in history class.” It’s true; many accounts of important African-Americans are sadly ignored in American history, and Nat Turner leading a slave rebellion in Virginia in 1831 is certainly one of them. Though it’s a story everyone should see, this portrayal of the rebellion is complicated by the sexual assault controversy that surrounds both its content and its maker.

Writer, director, producer and lead actor Nate Parker created this project with grand, noble ambitions, wanting to tell this impactful story in a way that could expose newcomers to its power while also diminishing the effect of one of the most infamous films in cinematic history. By naming his debut feature after D.W. Griffith’s infamous 1915 Ku Klux Klan-promoting motion picture, Parker hoped to reshape the title’s meaning in the minds of Americans into one that better represents its inherently hopeful words. Though these goals may have seemed lofty, they were closer than ever following a well-reviewed screening at the Sundance Film Festival.

However, Parker’s own transgressions change the story. This summer, Parker’s history of alleged sexual assault resurfaced after news broke that a woman whom Parker and fellow Pennsylvania State University student Jean Celestin were accused of sexually assaulting committed suicide.

The woman’s family felt Parker should have received a jail sentence instead of the acquittal he ultimately received and the woman’s sister Sharon Loeffler claimed in a Variety guest column that the two men had “the power of the [Pennsylvania State University] Athletic Department behind them” and that it “tormented [her] sister to see [Parker] thrive while she was still struggling.”

Parker maintained a friendship with Celestin, whose guilty sentence was overturned on appeal. The pair even developed the story for “The Birth of a Nation” together. Parker has denied any feelings of guilt. ““Seventeen years ago, I experienced a very painful moment in my life. It resulted in it being litigated. I was cleared of it. That’s that,” Parker said. In a recent “60 Minutes” interview with Anderson Cooper, Parker again denied any feeling of guilt and fell back on his Christianity when questioned about any wrongdoing.

In Parker’s film, his character Nat Turner also relies on his faith when justifying his plans of violence to fellow slaves. As a preacher, Turner gets the opportunity to travel, and he begins to change his perspective on slaves’ situations after seeing the extent of the atrocities committed against them.

Nonetheless, Turner’s biggest motivation for vengeance comes when a group of slave catchers rape his wife. Though powerful within the context of the film, this moment is completely fictional, a fabrication from the minds of Parker and Celestin. Loeffler writes in her Variety piece this “creepy and perverse” addition to the story of Nat Turner “pains her most of all.”

I have to agree.

It is sad and ironic that Parker paints himself in his feature as a God-fearing, loving husband who will fight in retaliation against the people who sexually abused the woman he loves when his own behavior completely belies this portrayal. Especially confusing is Parker and Celestin’s decision to add an extra reason for Nat Turner’s rebellion when his real-life inspiration was enough to tell a compelling, necessary story. By adding this extra motivation, I feel that Parker and Celestin actually blunt the true reasoning behind Turner’s revolt: He was obtaining vengeance not for his wife but for the conditions of slavery more broadly.

While he might never be found guilty, Parker certainly has engaged in some morally bereft activities from which people have been permanently damaged. He clearly lacks awareness of the effect of his actions, despite castmate and sexual assault survivor Gabrielle Union has speaking out about the issue to the LA Times. Parker may have some admirable qualities, evidenced by his dogged commitment to making his film a reality, but I believe that even in this regard he may have been misguided. His own character did not completely gel with the story he was trying to tell and obviously felt very connected with, and he hurt the film because of it.

I urge anybody who wants to learn the story of Nat Turner to watch this film at your own discretion. People need to know Turner and how his life relates to both the past and present, but they do not necessarily need to see a mediocre film about it made by an alleged rapist who may follow Turner’s history of violence too closely.