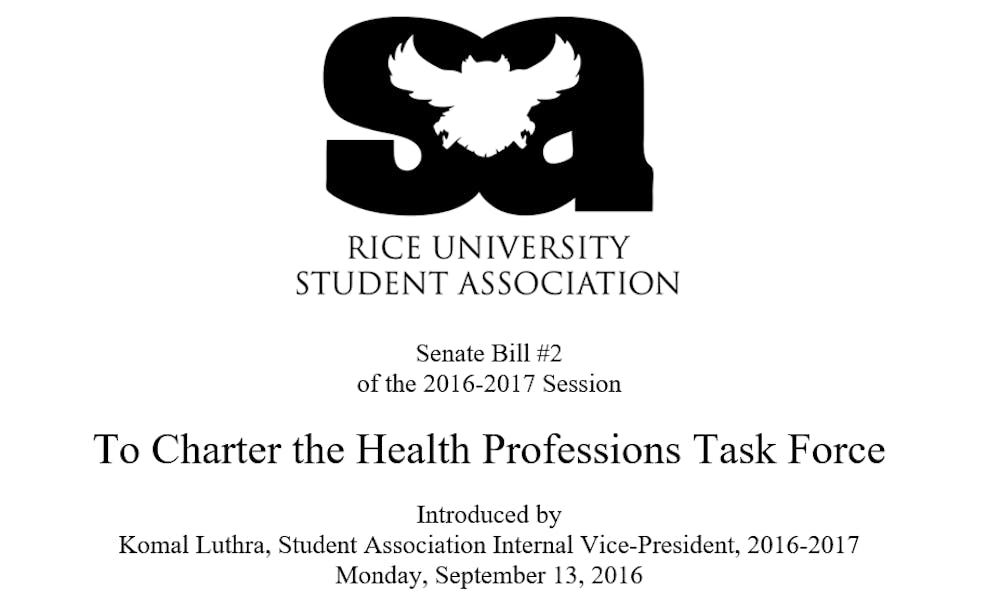 When Student Association Internal Vice President Komal Luthra introduced Senate Bill #2 “To Charter a Health Professions Task Force” at the SA meeting on Sept. 13, the proposed committee size was 30, including one chair, one co-chair, four subcommittee chairs and 24 members. But when the bill passed on Monday in a narrow margin of 14 in favor, nine opposed and one abstaining, the committee was reduced to six members. This change was one of several amendments made with the purpose of reframing the task force from bolstering resources for pre-health students to assessing whether a lack of resources even exists.

The task force will begin exploring the needs of the pre-health community in January through surveying students, conducting interviews, and talking to faculty and administration. Luthra, who will chair the committee, said she took on the creation of the Task Force after a conversation with Gia Merlo, the Associate Dean of Health Professions and professor of the Medical Professionalism and Observership course. The course, NSCI 399, provides students the opportunity to shadow a physician at the Houston Methodist hospital. According to Luthra, with 40 percent of students entering Rice as pre-med, and 20 to 25 percent attending medical school, such opportunities are critical in students’ decision whether or not to pursue a pre-health profession.

“We can help students find out earlier on whether it’s a suitable path for them rather than waiting until the third year when they’ve completed a majority of the course requirements and feel that ‘hey, it’s not suitable for me because I can’t even see myself in a clinic working with patients,’” Luthra, a Hanszen College junior said.

At the Sept. 19 SA meeting, Baker College President Paul Dingus expressed concerns that the bill failed to provide concrete evidence of a lack of resources for pre-health students. But on Monday, after working with Luthra, Dingus said he supported the amended bill.

“[The task force] is five people diluted over a semester and it’s completely exploratory in nature,” Dingus said. “It’s not going to take any action, so to me this is a why-not case rather than a why-shouldn’t case because I don’t see anything to lose from this.”

McMurtry College President Madhuri Venkateswar opposed the bill on Sept. 19 due to what she saw as a prioritization of certain career paths over others. Unlike Dingus, Venkateswar was not swayed by the reframing of the task force.

“[The task force] is an initiative that comes from the SA out rather than the community to the SA and then back outwards,” Venkateswar said. “I still struggle with trying to gather data when there isn’t a grassroots buy-in already to want to collect that data.”

Several members of SA, including Lovett College President Rahul Kothari, felt a task force focused on pre-health had the potential to alienate students in disciplines such as the social sciences and humanities and suggested widening the scope of the committee.

“My concern is the area where we are starting,” Kothari said. “ We have clearly seen there is a need for other departments at this university to have this support. We should start with something that requires more attention already.”

Those who found the bill exclusive, including Venkateswar and Jones College Senator Rohan Palanki, offered alternative solutions. Venkateswar proposed addressing advising in the SA’s section of the Survey for All Students while Palanki suggested that the project be taken on by New Student Representatives.

But others, including Brown College President Santiago Avila, felt the bill addressed a need among those under the pre-health umbrella who are not pre-medicine.

“My impression is that when we talk about pre-health, we are thinking pre-med, and there are a lot of pre-health people who are not thinking of going to medical school that don’t have the resources or the support that I think people are conceiving right now,” Avila said.

Another supporter of the bill was Hanszen President Kenny Groszman, who said the pre-health focus was not alienating for those in other academic disciplines.

“We should frame it as ‘The SA is willing to support ideas if you’re passionate about leading them,’” Groszman, a senior, said. “We shouldn’t make this about ‘We’re only going to support a limited number of ideas or that we’re picking favorites.’”

After the passage of the bill, Luthra expressed her hopes for the committee, which will present its findings to the SA by May.

“I hope that we can take a step forward rather than exploring if we see that there’s deficiencies in the accessibility of programs or advising,” Luthra said. “I don’t want to say that there’s issues or that students are facing challenges but if there is and we find that, I want to take action.”