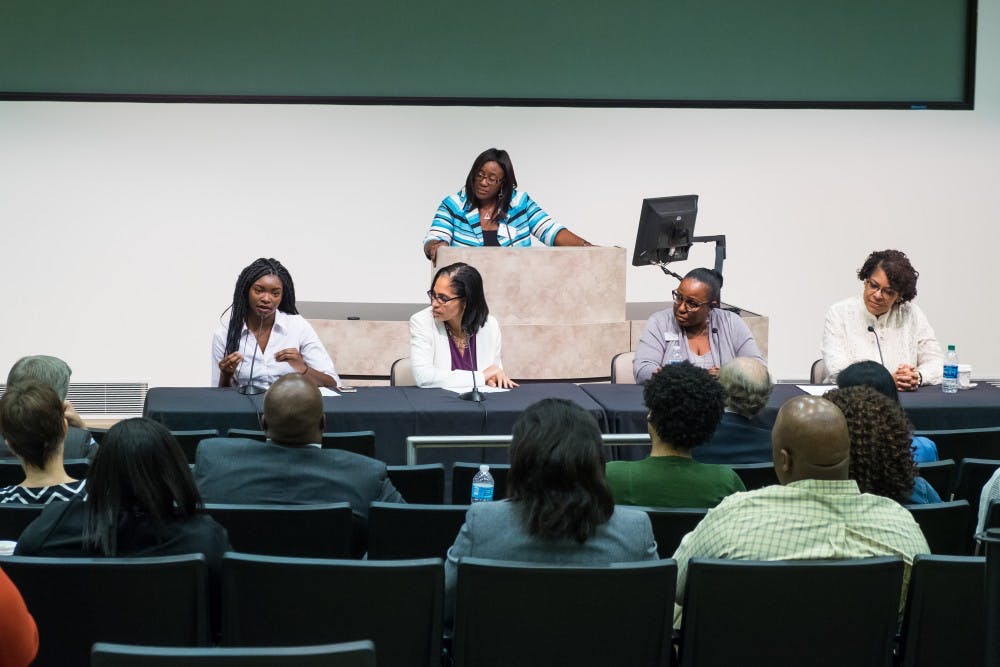 Student, faculty and administrators discussed the experience of the black community at Rice in a panel on Saturday. The event, State of Black Life at Rice, was organized by the Association of Rice University Black Alumni as part of the celebration for 50 years of black undergraduate life at Rice.

ARUBA President Akilah Mance (Jones ‘05) said she was encouraged by the diversity of the audience, which reflects Rice’s demographic advantage.

“Rice is in a unique position because we have such a diverse population and a small number of community members, thus we are able to sit down and meaningfully engage with one another, in hopes of improving the experience for all,” Mance said.

As the only student on the four-person panel, Black Student Association President Aislyn Orji said while black students are largely free to express their cultures through cultural events on campus, general apathy and covert racism still cloud their experience.

“When it comes to actual concerns, outside of sociology classes or panels such as this that people do take the initiatives to come, we are [almost] sounding like a broken record,” Orji, a Martel College junior, said. “We talk about faculty diversity, we talk about Black Lives Matter, we talk about being ostracized on campus among our residential colleges … How do we break past people's lack of understanding because of lack of a shared experience to care about our concerns?”

Coordinator of Minority Recruitment at the Office of Admissions Tamara Siler (COLLEGE ‘87) pointed out that political decisions made outside of Rice also have resonance for students. For instance, from 1997 to 2003, a Texas court decision barred universities from using race as a factor in deciding which applicants to admit, which challenged Rice’s commitment to diversity.

“Rice students think about what's happening inside the hedges and ‘how does that affect me,’” Clack said. “ And yet African American students don't have that luxury of being able to be that shallow in their vision because if you're not aware of what's going on outside that [affects] you, what ultimately happens is it comes in and bites you in the ass."

The fourth panelist, Director of Race Scholars at Rice and associate professor of sociology Jenifer Bratter, said that the discussion about black lives should be a collective exercise because political topics affect everyone even if they don’t realize it.

Siler added to the discussion by outlining the current admissions approach to recruiting minority students. While her team leads specific programs to reach out to minority students, she emphasized that every admissions officer has a role in bringing in students from diverse backgrounds.

“We invest in the staff training to ensure that every member of our staff, when they go out and recruit, we want to make sure that they are going to diverse high schools, [that] they are comfortable addressing all of the spectrum of issues that students of color may have,” Siler said.

Prior to the panel, provost Marie Lynn Miranda and Dean of Undergraduates John Hutchinson spoke respectively on the administration’s efforts to welcome faculty and students of color.

In her speech, Miranda alluded to recent remarks by a University of Nebraska football player who, with two other teammates, knelt in prayer during the national anthem in a football game. The player stressed the importance to speak out against injustices “even if we have nothing to gain and everything to lose.”

“Rice has so much to gain and, in fact, so much to lose if we do not continue to embrace the importance of diversity for our campus,” Miranda said.

Naming several faculty of color, Miranda said that these scholars they have shaped the campus in ways few other people can.

“There is absolutely no doubt that there is excellence that they have brought to our university, that the pursuit of diversity on our faculty does not require us to forsake quality or to forsake excellence,” Miranda said.

Hutchinson briefly elaborated on some of the university’s new initiatives, including the Rice Emerging Scholars Program, which prepares first-year students for the academic rigor at Rice, as well as affinity groups and the Harambe retreat, which seek to bring students from minority groups together during and after Orientation Week. He said the administration is open to student input on what needs to be changed.

“Hearing such a transparent presentation of how diversity and minority recruiting is actually done was eye opening, since it really shone a light on what people of color already know diversity is about, but what majority groups very often interpret as preferential treatment,” Ivory said.

Orji said she is grateful for the administration’s support and respect for minority students.

“I think it's important for people to be empathetic,” Orji said. “It's important to look at their struggles before they even tell you so they know you care. I definitely saw that in what Dean [Hutchinson] and Provost Miranda said.”

“I really appreciate people coming to me afterwards and saying that resonates with them,” Orji said. “Sometimes as BSA president, it's hard to make sure that your opinions align with the voice of the people that you're talking for, and that you communicate their opinions while staying true to yourself. That’s what the panel was for me.”

The first panel of this nature was convened in 1990, according to Mance, who said she sees discussions like this happening again in the future.

Reflecting on the yearlong celebration as a whole, Mance said it has been more successful and impactful than she imagined.

“We have literally discussed, contemplated, addressed and acknowledged every facet of this milestone for the University, now the challenge is to delve deeper into those issues so that in the next five, 10, 25 or 50 years when we reflect on this moment in history again, we will truly be able to say that we have made substantial strides as a community.”