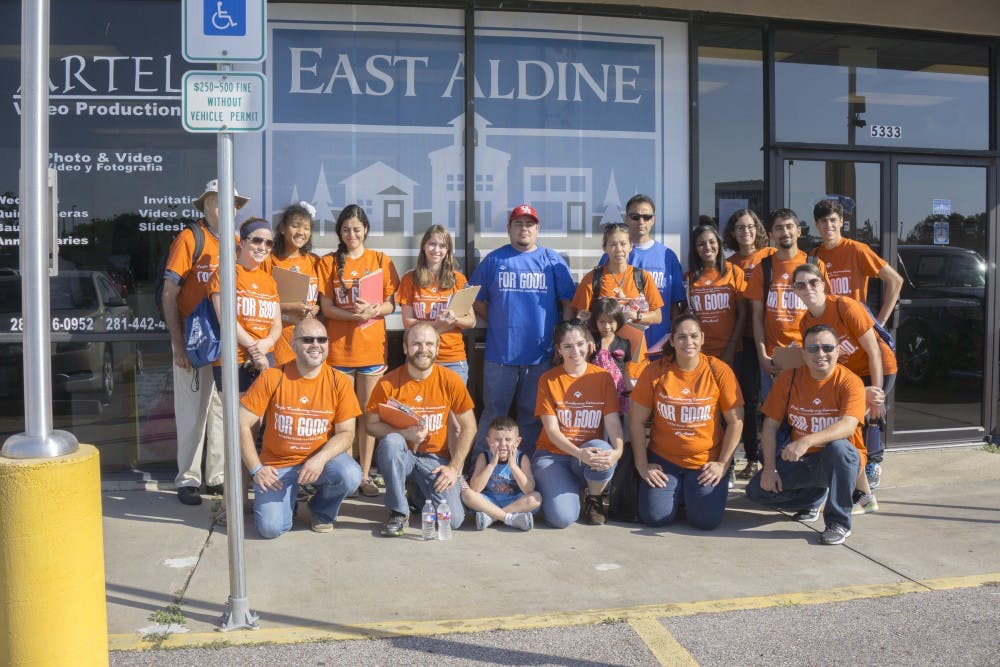 With a presidential election looming in November, the Rice Center for Civic Leadership and various student organizations have hosted a variety of voter registration drives and get-out-the-vote efforts over the past two months, registering a total of over 150 students before the Oct. 11 registration deadline. The efforts aim to increase Texas’s historically low voting rate.

The Rice Young Democrats held weekly registration drives, in addition to a large drive on National Voter Registration Day, Sept. 27, in conjunction with the CCL and the Rice chapter of the American Association of University Women.

An additional 50 students were registered through the National Voter Registration Day drive. The CCL hosted a volunteer deputy voter registrar training for 50 community members and students, making them eligible to register others to vote.

The CCL offered Rice students opportunities to volunteer in get-out-the-vote efforts in the Houston community as well.

“In total, we ended up with about 25 volunteers canvassing in low-voting neighborhoods over the past two weekends,” Kinney said. “That was our small part of a much larger effort: [Neighborhood Centers has] closer to 30 to 40 people out canvassing every Saturday until Election Day. Our 25 Rice students, staff and faculty probably knocked on over 300 doors.”

“[The voter registrations] will transpire hopefully into votes, both at Rice and in their home states,” Cirillo said. “But, it also gives people more efficacy and advocacy towards keeping in touch with politics and policy.”

Rice AAUW founder and Co-President Neethi Nayak said she believes the voter registration events were successful, but the work of campus organizations isn’t done yet. The next step is ensuring that students turn out to vote, she said.

“Ideally, the number of people registering helps give us at least a metric of what we can expect at polls, but probably not by much since several students were registered beforehand,” Nayak, a Martel College senior, said. “Since there is a polling location on campus, too, I hope it adds to the convenience for students without a car.”

Rice organizations’ efforts contributed to the registration of 15 million new voters in Texas this year. The state faces some daunting statistics when it comes to voter turnout, ranking 48th in the nation in the last presidential election, according to the Texas Civic Health Index. Eligible voters ages 18 to 29 make up 25 percent of the state’s eligible voter population, but many don’t vote. According to the US Census Bureau, only 30 percent of eligible voters in that age group voted in Texas in 2012, compared to 45 percent nationally.

Despite the low state turnout, Alex Bergin-Newman, financial director of the Rice Democrats and the other co-president of Rice AAUW, believes peer registration efforts can be effective.

“There have been studies that show when students are registered to vote by other students, they’re more likely to turn out to vote,” Bergin-Newman, a Wiess College junior, said. “Being registered at Rice can help people be more in tune with local politics, which frequently get ignored.”

Ben Hoff, a Sid Richardson senior, is one of the more than 150 students who were registered on campus this year and plan to cast a Texas ballot.

“I didn’t know I could register to vote in Texas since I’m already registered at home in Massachusetts,” Hoff said. “Had it not been for the voter registration tables, I would not have known I could register here.”

Early voting takes place in Texas from Monday, Oct. 24 until Friday, Nov. 4. Registered voters can vote at any polling location in their county during early voting or at their assigned precinct on Election Day, Tuesday, Nov. 8.