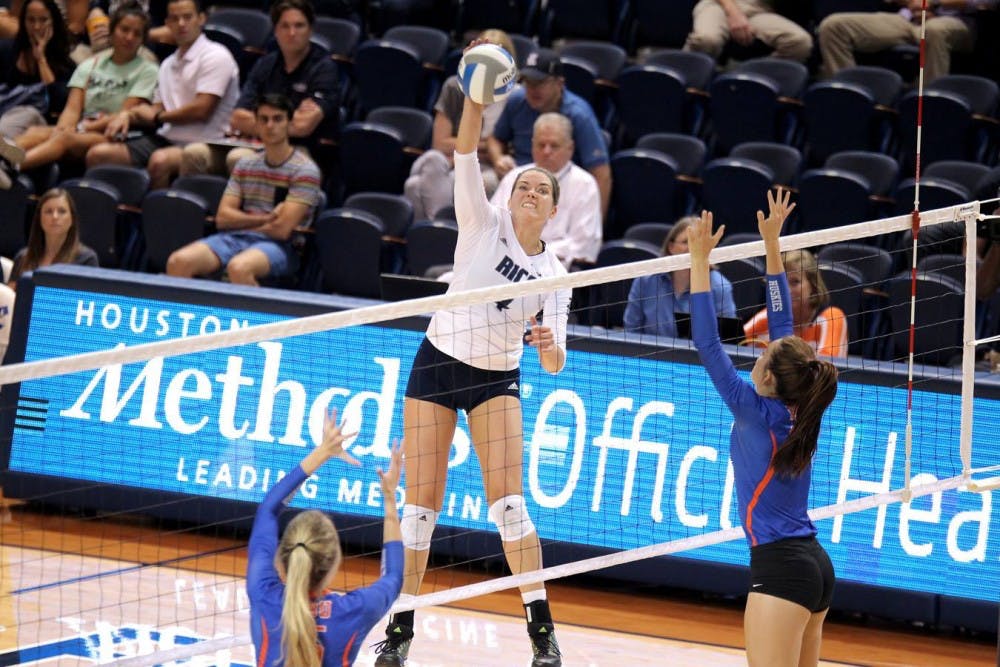 As a 16-year-old high school standout, senior captain Leah Mikesky committed to play volleyball at Florida State University. Six years later, she is finishing her college career at Rice. A natural-born athlete, Mikesky starred in tennis and track as a high schooler while earning academic all-state selections in volleyball and basketball. When she left Schulenburg, Texas, a small town of just under 3,000 people, to attend Florida State, Mikesky had no idea that her journey would bring her back to just 95 miles from her home town at Rice.

Mikesky’s career at Florida State came to an end shortly after the beginning of her sophomore year. She said her experience as a Seminole was underwhelming and that Florida State was not the right fit for her.

“I decided I wanted to do pre-med and there was nobody [at FSU] that did that as an athlete,” Mikesky said. “I got redshirted my freshman year, then I broke my foot. I didn’t really get along with the coaches that well, so it just made a lot of sense to come [to Rice].”

As excited as Mikesky was to transfer back to her home state, she would learn that it would be no easy task to integrate herself into the team halfway through her sophomore year. Mikesky said she got so hung up on the transfer process that she had no time to learn anything about the school at which she would spend her next three years.

“I didn’t even think about the fact that I was coming to a new school,” Mikesky said. “I rolled up on Greenbriar Sunday night before classes started, got my bags out and started walking to [Sid Richardson College]. I was thinking ‘I don’t know anyone! I don’t know what I’m doing here!’”

Despite receiving no orientation and knowing only a handful of people, Mikesky was happy in her new home. The team accepted her, and the coaching staff welcomed her warmly. According to Mikesky, the team’s ‘Big Sister’ program, which assigns a veteran team member to help mentor a new team member, helped her adjust to life at Rice.

“[Current sophomore Stephanie Mendivil] is actually way younger than me, but she turned out to be my big sister because we were both in Sid,” Mikesky said. “She helped me a ton, introduced me to her friends, and walked with me to practice every day. We got really close and we’re still really close.”

Inserted into the starting lineup, the Owls star has averaged over 3.5 kills per set over her career at Rice, earning an assortment of awards including All-Conference Second Team honors her sophomore year and First Team honors her junior year. However, according to Mikesky, none of these accolades would top the exhilarating feeling of defeating No. 22 Western Kentucky University in the 2015 season, undefeated in conference games at the time.

“My favorite volleyball memory was last year when we beat Western Kentucky at home,” Mikesky said. “We knew it was going to be a tight game. The year before, we had played them in Kentucky and lost in five sets. This year, they came here and it was the exact same situation, but we beat them 16-14 in five at our place.”

That would be Western Kentucky’s only conference loss of the year, and Mikesky recorded a double-double with 21 kills and 16 digs in defeating this conference powerhouse.

Unfortunately, the Owls would not get another shot to beat the Hilltoppers on a higher stage, getting knocked out of the conference tournament in the first round against Southern Mississippi. According to Mikesky, this season, the team is ready to go to its first NCAA tournament since 2009, and she has extra responsibilities as a co-captain.

“This team is a lot more mentally ready to win than in past years,” Mikesky said. “As co-captains [with junior Madison McDaniel], our goal is to get the team as energized and as ready as possible while trying to be supportive of the whole team.”

As a team leader and top performer, Mikesky can make the difference in the Owls’ quest to return to the NCAA tournament.

Antsy Owls plan return to field against UNT this weekend

When Rice takes the field against the University of North Texas on Saturday, it will be the Owls’ first game in 21 days. After a 30-6 win over the University of Southern Mississippi on Oct. 31, Rice has seen their last two games postponed due to COVID-19 cases within their opponents’ programs. The 1-1 Owls now have to regroup from their unscheduled two week break in order to face a Mean Green team that enters the game with a 2-3 record. Head coach Mike Bloomgren said he is proud of how his team has been able to improve despite these challenges.

The Rice Owls football season has encountered several major hurdles this season. The team has played only two games thus far, and has had two games postponed due to COVID-19 safety precautions. However, a bright spot for the team has been its consistent offense, which has scored 32.0 points per game on average, ranking No. 45 in the nation. A key player contributing to the success of the Owls’ offense is senior wide receiver Austin Trammell. 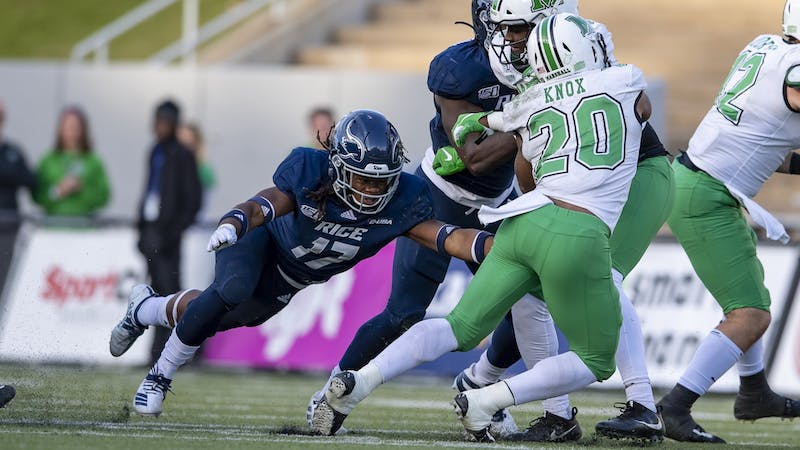 Owls return after week off to battle Bulldogs

Rice will take on Louisiana Tech University this Saturday in Ruston, Louisiana. The Owls enter the game with a record of 1-1 on the season. In their first game of the season, Rice lost in double-overtime to Middle Tennessee State University. However, they followed it up with a 30-6 win over the University of Southern Mississippi.