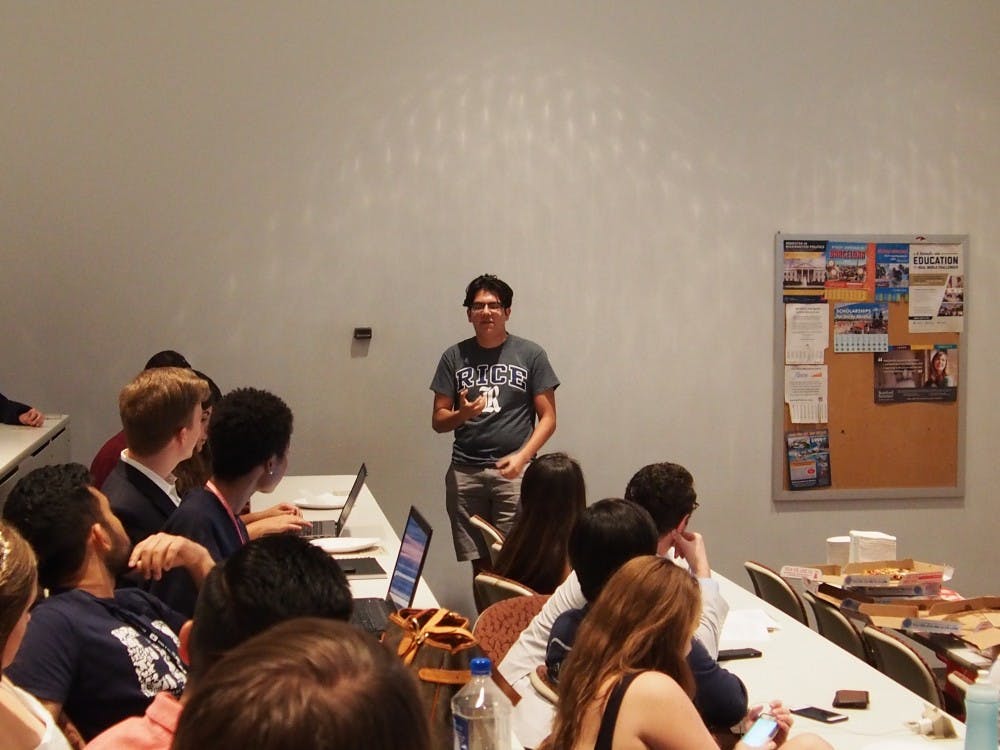 The Rice University College Republicans voted by a 2-to-1 margin Thursday night to not endorse Republican presidential nominee Donald Trump after over an hour of internal debate. The decision was not without controversy: Several Trump supporters walked out in protest, and the club received backlash online from Republicans outside of Rice.

College Republicans President Jake Blumencranz said he was pleased with the outcome and hoped to start working to elect Republican candidates in congressional and state races.

“I’m happy with the way the vote came out,” Blumencranz, a Brown College junior, said. “Now we can move forward with what we really want to do, which is get everyone down-ballot elected and advocate for those [candidates].”

The meeting drew approximately 35 students and a diverse selection of political opinions. Many of the pro-endorsement members discussed the future of the Supreme Court as a reason to support Trump. The seat of late Justice Antonin Scalia has remained vacant since Scalia’s death in February, and it is likely the next president will appoint additional members due to the age of several current justices.

Jed Greenberg, a Jones College sophomore, argued that the issue of the Supreme Court makes it worth voting for Trump, even if some do not agree with him on other issues.

“A good Supreme Court will uphold pro-life values, push back regulatory overreach and will generally be in line with conservatism,” Greenberg said. “If you look at the justices that Donald Trump has floated, they are generally establishment Republican justices with strong conservative track records.”

Others held concerns about Trump’s values.

Phillip Hedayatnia, a Brown freshman who describes himself as a moderate, said he had worked as a journalist for a year and spent the summer covering the Trump and Clinton campaigns. Hedayatnia said he was concerned about many of Trump’s supporters.

“When I traveled with the Trump campaign, I saw exactly the people that the Democrats have been saying the Republicans are for years,” Hedayatnia said. “I saw racists. I saw sexists. I saw crazies. I saw people who were nuts, out of their minds, supporting this man.”

Hedayatnia said he is concerned about the implications of this support if Trump won.

“I worry that [if] Donald Trump gets elected and has a cult around him, then no matter if he is good or bad [it] will stick with him through elections,” he said. “I believe that is how demagoguery happens.”

The chapter’s decision drew criticism online from organizers working for Students For Trump, a national organization unaffiliated with the Trump campaign. Josh Gremillion, the organization’s national social media director, said in an email to the Thresher that leaders of chapters that do not support Trump should resign.

“There is no reason why they should not be supporting our Republican nominee,” Gremillion, a freshman at the University of Houston, said. “If the leader of the chapter refuses to endorse Trump, they need to resign because they are not doing their job by [not] backing the Republican nominee.”

Gremillion said the group is essentially supporting the Democratic nominee.

“It is unacceptable — by them not backing Mr. Trump, they are backing the most corrupt human being on the face of the earth — Hillary Clinton,” he said. “It blows my mind how people can be so ignorant.”

The club, which was founded in 2013, joined a growing list of College Republican chapters that have declined to endorse Trump, including those at the University of Houston, Cornell University, Princeton University and Harvard University.

Some have offered a sharp rebuke of the candidate, including the Harvard chapter, which received national attention and strong condemnation from Trump supporters after posting a statement declining to endorse the Republican candidate for the first time since the club’s 1888 founding. While several non-Rice students made negative comments and reviews on RUCR’s Facebook page following the vote, the reaction to the Rice club’s decision appeared more restrained.