Velvet Taco brings eclectic fare from Dallas to the Heights 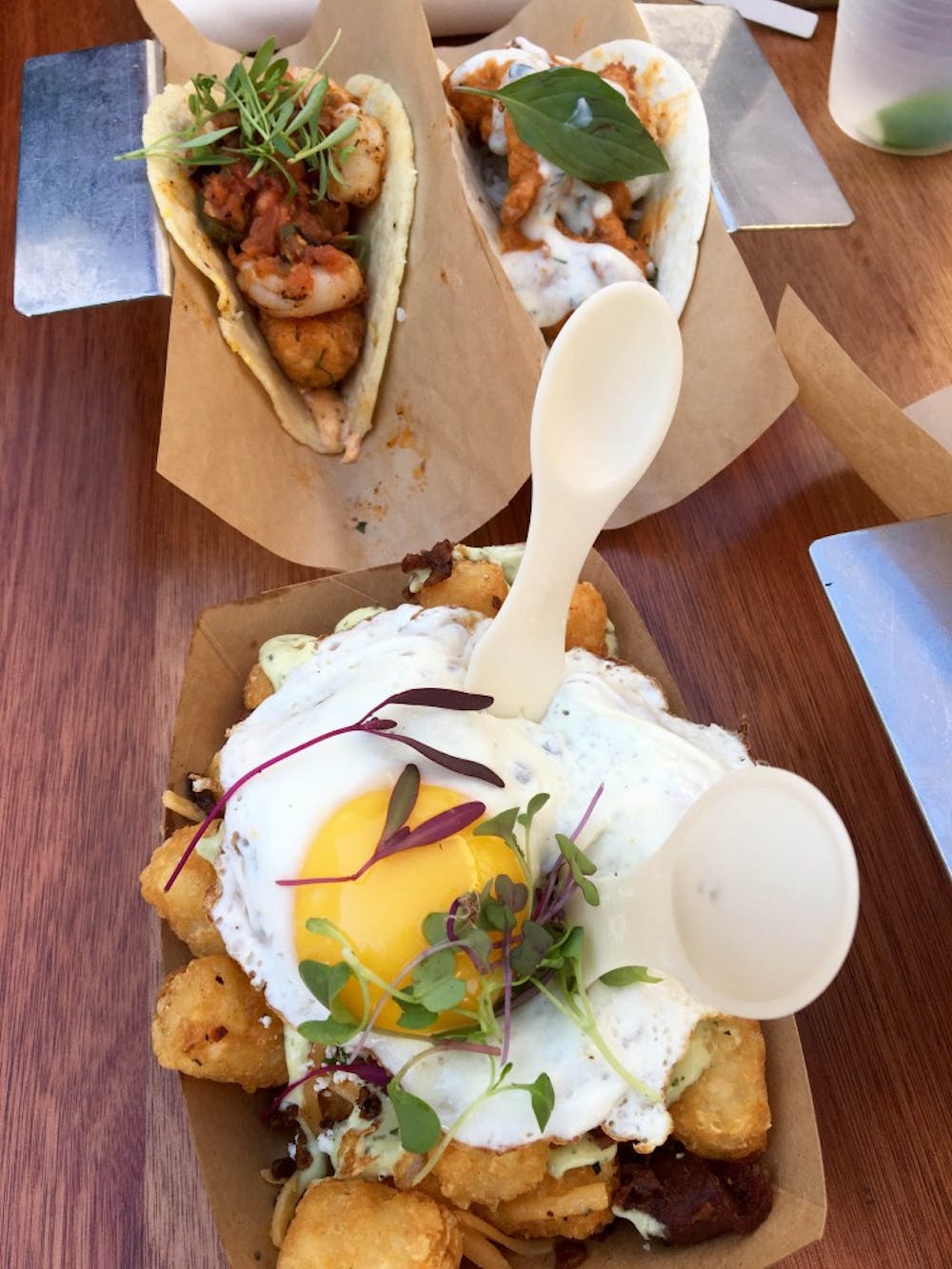 With taco trucks, restaurants, pop-ups, shacks and every other imaginable form of taco-selling establishment scattered throughout Houston, Velvet Taco stands out among the bunch as a quirky and unique restaurant in the Heights. Originating in the Dallas area, though Velvet Taco is not a unique Houston establishment, it has gained quite a cult-like following. Upon arriving on Washington Street, hot pink and lime green tiled walls outside the building beckon you inside the casual, cozy interior of the restaurant. A huge ceiling-to-floor menu fills up the wall beside the cash register allowing you to agonize over your order from the choices that are neatly divided into categories based on filling: chicken, beef, veggie, pork, egg and sides.

Upon first entering Velvet Taco I was skeptical; it seemed like a pricier version of the classic, beloved Torchy’s Tacos, and why would I spent more than $5 on a taco when I could increase my waistline for much less elsewhere? I was quickly proven wrong, as the menu had a diverse selection for everyone, based on dietary preferences or otherwise. Accompanied by a group of friends that included a vegetarian, a carnivore and a picky eater, Velvet Taco’s expansive menu proved to serve all palates.

Some of the most popular meat options are the spicy tikka chicken and the shrimp and grits. The tikka chicken is a soft, pillowy flour tortilla supporting two full strips of hot, juicy chicken tenders massaged with tikka masala sauce cushioned by creamy, buttered basmati rice and sprinkled with some Thai basil on top. Impressively, the tikka chicken was able to retain its crispiness, even with all the sauce. The spices from the pepper sauce added a nice initial kick that was balanced by the buttery rice. The shrimp and grits taco metaphorically blew my mind — not only was the blackened shrimp flavorful and perfectly juicy, but the geniuses behind Velvet Taco took pepper jack cheese grits and fried it into a ball to reduce the mess from taco eating and to increase tastiness.

Other popular options include the falafel taco, which is great for those watching carb intake, as the crispy balls of falafel, avocado, tomato and arugula are wrapped in lettuce instead of a traditional tortilla. The hearty breakfast tacos, with barbacoa brisket and egg frittata, are filling enough to function as part of a lunch or dinner. The sides are also excellent, especially the crispy tater tots (like the ones from your elementary school cafeteria) that are fancied up with bits of herb goat cheese, smoked cheddar, bacon and avocado crema drizzled on top, and generously smothered with chili butter. In addition, a fried egg rests gently on top of this delicate structure, oozing a perfectly runny, bright yellow yolk with the poke of a fork.

Two to three tacos should be more than enough to fill you up, but if you’re especially hungry, get some tater tots, red curry coconut queso or corn on the side to tide you over until your next meal. In all its fun quirkiness, Velvet Taco also has a great deal on Monday nights: The backdoor chicken order, which includes a full rotisserie chicken (this is not a typo!!!), six corn tortillas and sides of Korean barbeque sauce and Mexican-style corn, is half off for $10 on Monday nights.

Tacos are a quintessential part of any college student’s diet, and while Velvet Taco may lean toward the pricier side, their fun, unique offerings are well worth it. Being able to globe-trot your way through the menu’s diversity, sampling the made-from-scratch in-house tortillas, and a dazzling presentation of food that’s perfect for your food photography addiction will make your trip well worth it.