The Speak Up Project: Changing the conversation on sexual assault 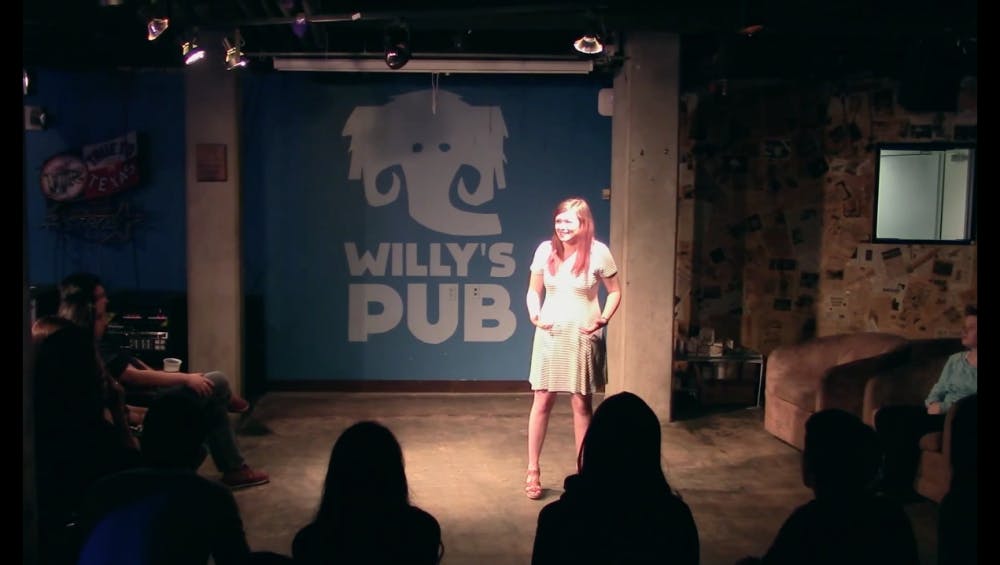 
McMurtry College sophomore Madison Blattel performs a monologue addressing the sexual assault at a party on Sid Richardson College seventh floor in the second annual Speak Up Project. The performance features monologues written by Rice students about their experiences with sexual assault, and recently received funding from the Bill Wilson Grant to become an annual performance.

The Speak Up Project marked its second iteration with an entirely new cohort of monologues from Rice community members about their experiences of sexual assault and violence on March 25. The Speak Up Project was founded last year by Wiess College senior Vicky Comesanas, with the financial support of the Bill Wilson Grant. She has directed the monologue series both years as well. The project seeks to provide a different forum for discussion about sexual assault.

While the premise is the same, the second generation of the project feels even more essential with the increase in our discourse about sexual assault at Rice. Since the last on-campus performance of the Speak Up Project, the Survey of Unwanted Sexual Experiences numbers were released, the assault at Sid Richardson College occurred, sparking eight Thresher articles and the Student Association proposed a Critical Thinking in Sexuality course. While preventing sexual assault and improving the culture for survivors has been an important issue for many people at Rice for a long time, in the past year it has gained a campus-wide urgency.

Still, the Speak Up Project does something that other efforts haven’t — it presents the narrative realities of sexual assault without qualifying them, uninterrupted, straight from the hearts and heads of survivors.

These monologues make it clear that they aren’t cases to qualify. The sincerity, the pain, the perspective of the survivors as each horrible, confusing moment unfolds is so convincing. They feel intimate too, not only because of the subject matter, but also due to the proximity of the actors to the audience and Comesanas’ very deliberate choice not to use microphones.

Unlike in last year’s monologues, most of these assaults took place at Rice. It’s shaking to know what has happened on this tiny campus, to know that there are people walking around bearing the burden of these stories. It makes the SUSE numbers feel even realer — it humanizes them.

The monologue of the survivor of the recent assault on Sid seventh reminds us most clearly of the fact that people in our immediate space have these experiences. In the monologue, the survivor responds to those that doubt the severity of her experience, to the Thresher, to everyone that has felt the right to give their two cents. The importance of the project is most palpable here; the monologue is a direct response to the way we have been talking about sexual assault on campus.

Despite the strength of these survivors’ voices, I was incredibly surprised by their seeming need to defend themselves. Many of them emphasized that while their assaults were not classified as rapes, that did not mean they were any less horrible. Others asked the audience to understand that, while they did not always make the best choices, the assaults were not their fault. Toward the end of the performance I surveyed the faces of the audience and it was clear that nobody needed convincing. Even when they were in a space where they were being heard, they still felt the need to defend themselves. I suppose that this defensiveness reveals just how hostile our discourse can be toward survivors.

The monologues are significant beyond being stories about sexual assault — they are also stories of coping with trauma and the change that accompanies the process. In the discussion fielded by Comesanas afterward, it became clear that in more ways than one the monologues required the audience to examine themselves. Some women in the audience shared that the events of the monologues felt all too familiar. I was forced to remember the way I talked about the assault at Sid, which was certainly less than perfect despite how careful I tried to be. Even more so than last year, the Speak Up Project is not shy about the fact that it is trying to change the conversation.

While this semester’s performance has passed, you can watch the archived monologues on Youtube via the event’s Facebook page. Furthermore, the Speak Up Project has officially become an annual event, and I encourage those of you who have stories like these to submit them and everybody to come see them. It’s a truly beautiful and absolutely crucial forum.