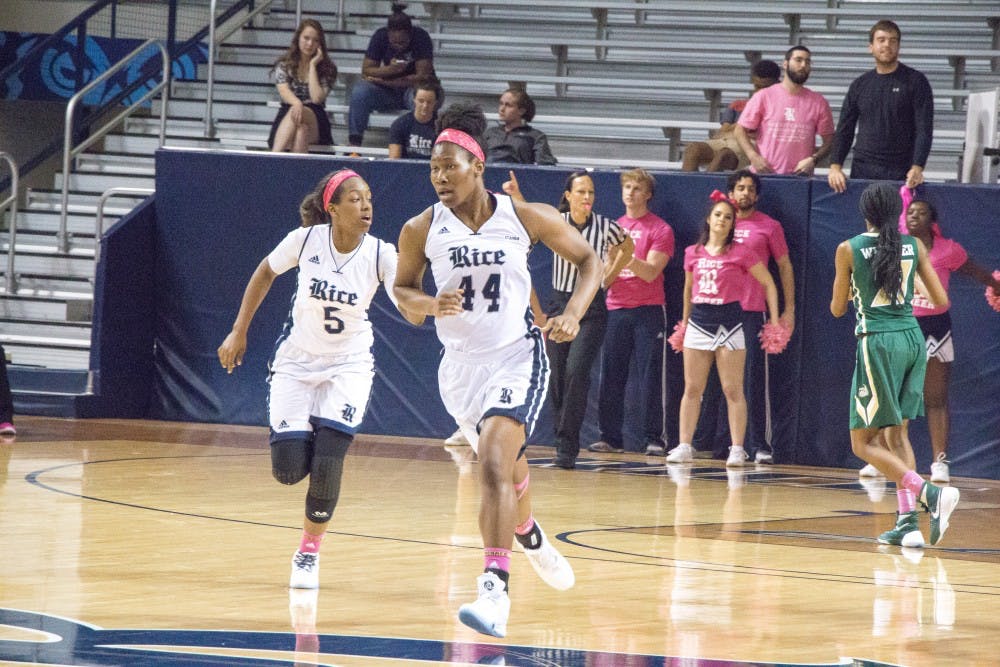 Freshman guard Lauren Grigsby follows up the court behind junior forward Adaeze Obinnah during the Owls’ 69-58 loss against the University of North Carolina, Charlotte on Thursday. The game was Rice’s annual “Play 4Kay” game, an event supporting breast cancer awareness and research.

This year’s freshman class was supposed to be the one that would spark Rice men’s basketball to four years of success. While there have been some highlights, especially the performance of freshman guard Marcus Evans, the team has not lived up to its preseason hype.

Last year, Rice hired Tina Langley from the University of Maryland to be the new women’s basketball head coach. Langley, like men’s basketball head coach Mike Rhoades, has experience as an associate head coach at a program that appeared in the Final Four. She was expected to bring a winning culture to Rice when she took the job following the Owls’ 9-21 season last year. Instead, the team opened the season with seven consecutive losses. There has been mild improvement since, but nothing has occurred to make it appear that the team can contend in Conference USA in the foreseeable future.

Some of the basketball teams’ difficulties can be attributed to inexperience. The men’s team currently rotates through a seven-man rotation, and three of those players are freshmen. It was expected that the team would suffer through a difficult period to open the season due to the number of players transitioning to the new style of play.

Unexpectedly, the team has not seemed to improve since the beginning of the season. After starting the year 5-6 and notching an impressive road win at the University of New Mexico, the Owls have gone 4-10. Three of those wins were against the other three teams that hold a 4-8 record in Conference USA. Perhaps the only impressive win the Owls have earned since December was a 75-66 victory on the road against Old Dominion University this past week.

Although the team’s performance has been mediocre, the Owls’ freshmen have impressed. The three freshmen who consistently play are each among the Owls’ top four scorers, but those players cannot carry the team for the next three years. Rice will need another quality recruiting class to support these freshmen if it wants to contend for a Conference USA championship in the near future.

The women’s basketball team faces similar inexperience problems regarding its head coach. Langley has been on the job for only a few months now, so she has not had the chance to recruit players. Once she builds a roster of players she has recruited, it will be easier to judge her success as a coach. For now, she has helped Rice show a few signs of improvement this season. The team was consistently blown out early in the year. More recently, however, the Owls have lost by only three points to Western Kentucky University, which holds a record of 19-4 on the season, and have beaten Old Dominion, which is currently tied for fourth in Conference USA with a record of 7-5 in conference play. The team has appeared to adjust to Langley’s new system as the season has progressed.

Despite some encouraging signs from both the men’s and women’s teams, this season was not the turning point it was supposed to be for Rice basketball. It will take at least one more recruiting class for Rhoades to create the winning culture he wants, and it may take Langley several of them. Those classes will have to endure the same growing pains the current men’s freshman class is going through, so it may be two, three or even four years before men’s or women’s basketball can compete for a conference title. This season does not mean Rice basketball is not headed in the right direction. It does, however, mean that the destination is still far down the road.