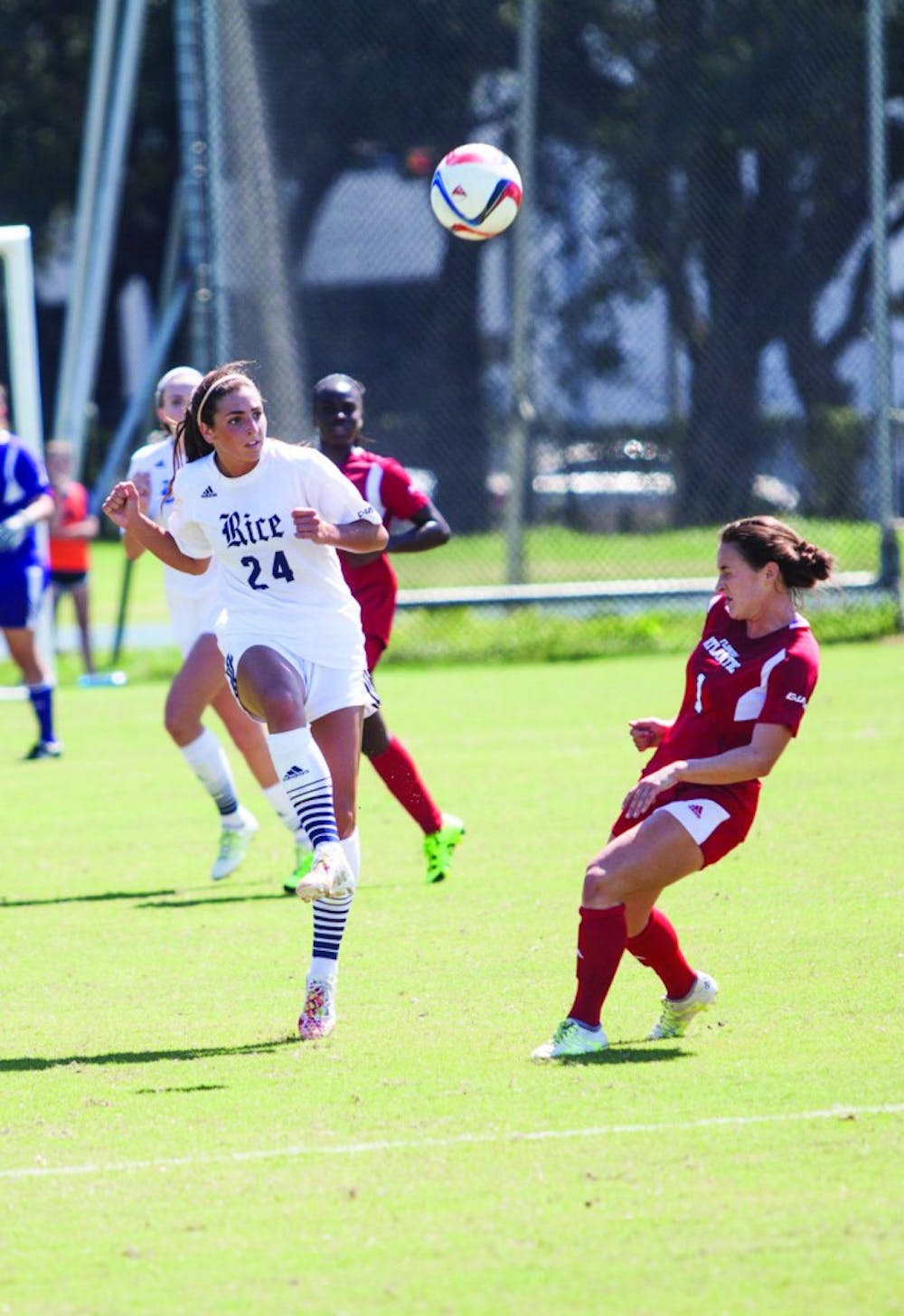 
Junior defender Jenny Fichera clears a ball during a 1-2 loss against Florida Atlantic University. Senior defender Jasmine Isokpunwu sent in a game-tying goal with two seconds remaining in the game to send the game to overtime, where Rice fell 3-2. Rice is now 6-5-1 on the season and 2-2 in C-USA.

The Rice University soccer team played two consecutive matches at home for the first time since Sept. 6. The Owls either tied or broke a school record in each game resulting in an exciting weekend of games.

On Friday night’s 4-2 victory over Florida International University, senior forward Lauren Hughes registered three assists, tying a school record. In Sunday’s matchup against Florida Atlantic University, Rice was trailing 2-1 leading up to the final moments of the match. In a frenzied finish, Rice tied the game at the 89:58 mark of the match, just two seconds from the final whistle for what became the latest goal in Rice history. However, Rice eventually lost in double overtime 3-2. The Owls are currently 6-5-1 (2-2 in C-USA) on the season.

At the 1:21 mark of the first half, Hughes drove in a ball to sophomore Nia Stallings who secured a touch and put it past the keeper into the back of the net to open up the scoring. After FIU tied the match up in the 19th minute of play, the Owls quickly responded with a goal in the 21st minute. Junior transfer midfielder Madeleine Lundberg fired in a shot from just inside the 18-yard box to reclaim the lead for Rice. Following halftime, Rice scored again to make it 3-1 on Hughes’s third consecutive assist. The scoring for the afternoon was complete in the 58th minute when Hughes scored a goal of her own to give her six on the season to put the game away for Rice. The four goals scored were not only by four different players but were more goals than Rice had scored in their previous four road games combined. The Owls held on for a 4-2 final.

The Sunday matchup featured a battle of the two Owls squads in Conference USA. Rice delivered the first blow in the 30th minute of the match. Freshman forward Marissa Topolski navigated her way around a defender on the outside of the box and fired in a low cross to senior midfielder Danielle Spriggs who had the easy tap-in right in front of goal for her second goal on the weekend. FAU then responded by scoring two goals in the 34th and 39th minute of the match to take a 2-1 lead into halftime. Rice played the entire second half looking for the equalizing goal and outshot FAU 14-5 but continued to come up empty. As the stadium announcer counted down from 10 seconds to the final buzzer, Rice was busy trying to redirect a bouncing ball into the net. After multiple deflections from players on both teams and a shot by Hughes, senior defender Jasmine Isokpunwu fired it home with two seconds remaining in the game to stun FAU. In the 99th minute of the match, Rice looked like they had the game-winning goal on a put-back shot by Hughes, but an offside call negated the goal and sent the game into a second overtime where FAU would score and hand Rice the 3-2 loss.

Head Coach Nicky Adams said she credits the execution of the game plan and the play of her forwards up top to the victory on Friday night.

“I thought we had a great game plan going into it,” Adams said. “Lauren [Hughes], Nia [Stallings] and [senior forward Holly Hargreaves] up top were amazing for us. [Hughes] with three assists just shows what a dynamic player she is where she can score goals and can also put people in front of goals.”

Adams said the last-second goal represents the essence of her team.

“We outshot them 14-5 [in the second half] which is really tremendous,” Adams said. “We knew a goal was going to come but it was just a matter of time. It just shows the character of those girls … how amazing they are and their commitment to this team and to the game itself.”

Lundberg, a transfer from the Air Force Academy, said all the goals scored originate from team effort.

“For me, it’s all a clean state [being at Rice],” Lundberg said. “I’m out there with my teammates and we’re working together so well to the point it shows in our scoring. The goals were 100 percent team effort which is the way it should be.”

Spriggs, a team captain for the 2015 season, has started in 45 of the last 47 games for the Owls. She said the perseverance shown by her team to fight down to the final second in Sunday’s match will benefit the team as they look ahead to two road games this upcoming week.

“I think our resilience showed that our team is a team that’s not going to shy away when down a goal or when things get tough,” Spriggs said. “That’s something that is going to help us as we move forward in the season.”

The Owls will head back on the road for the next two games to face Old Dominion University and the University of North Carolina, Charlotte in more C-USA competition. On Friday night, Rice will face an ODU team coming off a weekend of two rain-suspended matches. Rice will then face Charlotte, who were on the losing end of back-to-back 1-0 games this weekend.