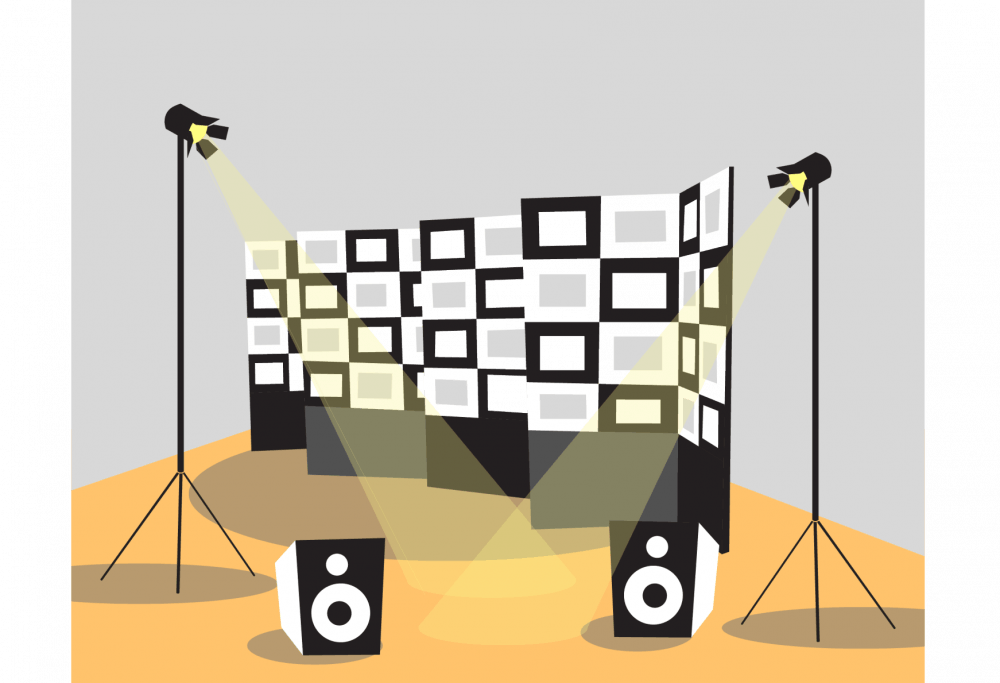 Photographer and filmmaker Bill Daniel sets up one-night pop-up events with a portable “gallery,” consisting of:lighting, a standing wall with photos on both sides, and a sound system.

Photographer and filmmaker Bill Daniel made Rice the next stop in his “Tri-X Noise” tour on Friday night. The event centered around the titular collection of Daniel’s photographs which documents punk and skater scenes, among other subcultures. The event also included performances by two bands.

As with the “Tri-X Noise” tour, Daniel often chooses to present his art in this mobile format. For “Tri-X Noise,” he sets up a folding gallery wall, also providing lighting and a sound system. With these minimal elements, every space on the tour is transformed into a replication of Daniel’s comprehensive vision. He placed lights on the floor, without overhead lighting, to ensure that the viewers shade whatever photo they are standing in front of. The music began heavy and atmospheric before turning into the punk rock that was featured in the photos.

“The methodology of touring and doing a one-night show is definitely inspired by the way bands work,” Daniel said. “The visual art model is based on gallery shows. Let’s just make every night the week of the opening, we’ll just move the show to another venue.”

The photographs span 30 years, starting with Daniel’s earliest work, shooting the punk shows that he attended as a young man in Austin.

“Going to punk shows was kind of the gateway for me into the world of ideas and art. My first project was shooting bands, which quickly turned into just shooting audience,” Daniel said.

The bridging of the photos taken in the 1980s and the contemporary photos is seamless; each photograph was taken using the same camera, lens, film and flash. Upon initial viewing it is difficult to discern old from new, but upon closer examination Daniel finds interesting disparities.

“Looking at people through the exact same apparatus 30 years later, you can really see the differences,” Daniel said. “Especially this type of photography, it’s kind of detail-rich.”

The photographs are black and white, high contrast and center around the subject of the body. People dance, perform, skate and pose.

“It’s interesting to still find that [the lens and the light are] exactly the same even though the people are a little different,” Daniel said. “Here’s the human form six feet away from a camera and a flash.”

As a documentary photographer and filmmaker, Daniel said he finds himself in an interesting position in the communities that he follows, both an observer and a participant.

“Being there with a camera you’re in another zone,” he said, regarding shooting punk shows. “You become an observer in a way, but the way I moved and participated in the crowd ... was kind of like both.”

The event also featured his film “Who is Bozo Texino?” which explores the nomadic life of freight train riders, who refer to themselves as hobos. In these communities, many individuals adopt monikers, which become their names and are used to sign graffiti boxcar art. The practice involves drawing a given image dozens to hundreds of times, on the boxcars of different trains that they take across the country. The film aims to discover the identity of one artist in particular, the elusive Bozo Texino, whose identity is shrouded in mystery by many contradicting accounts.

“The train film is kind of a life work,” Daniel said. “It gave me a platform to keep building as a working artist.”

It took Daniel 16 years to make the film, riding the rails, interviewing freight riders and stopping every so often to work as a bike messenger. The documentary hands the task of speech over to those in front of the camera. There is no narration, and Daniel’s voice is rarely heard. Shots taken from the insides of boxcars and the sounds of trains speeding along give the viewer a sense of constant motion, a vague taste of a life of endless travel.

Daniel’s broader body of work takes interest not only in subculture, but also in counterculture.

“I feel like culturally, we’ve destroyed the idea of one hegemonic central culture,“ Daniel said. “What’s not really present in these two pieces is people who are living in response to the crisis of our time, which is not just climate change, but a whole industrial collapse.”

Other pieces center around landscapes and how they’ve changed; one film focuses on the expansion of a Texas plastics plant and how it damages the local shrimping community.

While “Tri-X Noise” was a one-night event, it should be reason enough to keep an eye out for arts events at Rice and in Houston. As is evident from this show, there is a rich variety in art in these communities, and Houston’s art offers something for everyone.