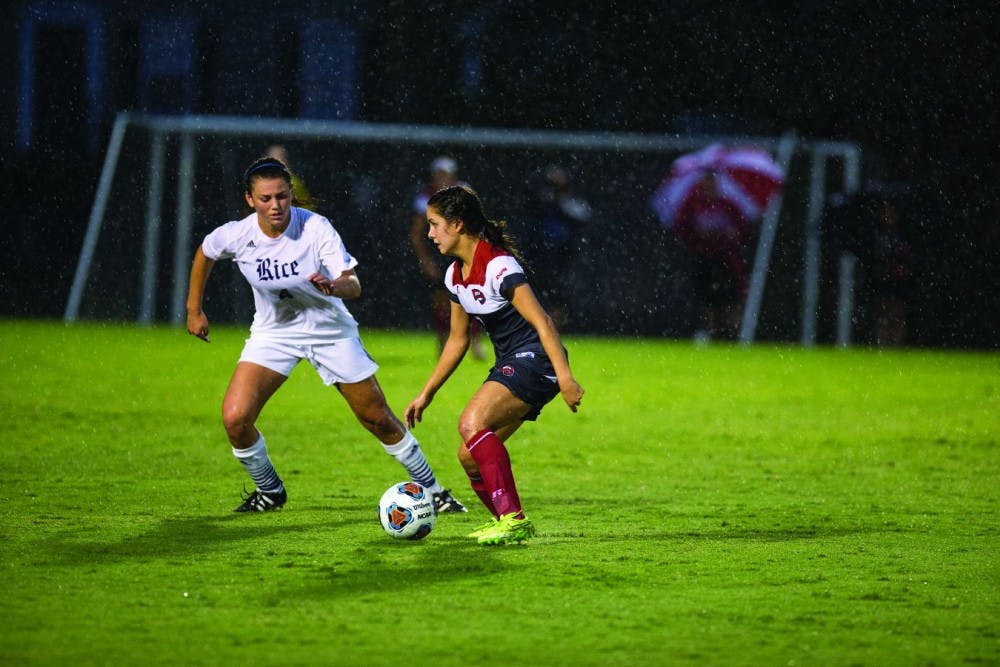 Sophomore midfielder Samantha Chaiken defends against Western Kentucky University’s possession during a 3-1 victory over the Hilltoppers. The Owls followed the win with a 0-1 loss against Marshall University, the second time Rice has been shut out in their last three matches. The Owls, who were projected to finish first in Conference USA, are now 5-4-1 on the season including a mark of 1-1 in conference play.

As the Conference USA portion of the 2015 season begins, the Rice University soccer team will look to make a run towards securing back to back championships.

Before the season began, Rice swept all preseason accolades and was tabbed by the C-USA coaches’ poll as favorites to repeat. With senior Lauren Hughes (Preseason Offensive Player of the Year) and junior Jenny Fichera (Preseason Defensive Player of the Year) at the helm, the Owls began play this weekend with a pair of road matches at Western Kentucky University and Marshall University. The Owls went on to win the league opener on Friday by a score of 3-1 but fell to Marshall 1-0 later on in the weekend. The 1-1 week took the Owls to 5-4-1 (1-1 in C-USA) on the season.

The defending champions got off to a quick start in Friday afternoon’s rain-filled matchup against the Hilltoppers. The scoring began in the eighth minute when Hughes fired a shot directly at goal that was saved but was not cleared out of the penalty area. Senior forward Holly Hargreaves quickly redirected the ball into the back of the net to give Rice the early 1-0 advantage.

In the 30th minute, the Owls struck again when sophomore defender Aliza Wolfe played a cross into the 18-yard penalty area. Hughes ran up to receive the ball and calmly fired a shot passed the goalkeeper for the 37th time of her Rice career. The Owls took 14 shots in the first half and took a 3-0 lead into the break. Rice won by a final score of 3-1 as the Owls improved their unbeaten record to 13-0-1 when both Hughes and Hargreaves score in a match.

The Owls’ next opponent on the schedule was the Marshall Thundering Herd, who were riding a nine game unbeaten streak into the matchup. In similar fashion to Friday night’s game, the Owls controlled the offensive side of the ball for the majority of the first half but were unable to come up with any goals to show for it. Despite out-shooting Marshall 8-3 to start the game, the two teams were tied at 0 goals apiece headed into the break.

In the 66th minute of the match, Rice conceded a goal after a deflection off the crossbar that hit right back to the Marshall player. The defensive pressure applied by Marshall intensified following the goal to the point Rice was able to only get off one shot from the 66th minute onward. The Owls lost by a final score of 1-0 and were shutout for the second time in the last three matches.

Head Coach Nicky Adams spoke about the way Rice battled to a Friday night victory and said the team shook off the 0-2 performance from two weeks ago.

“This is what I love about my team … the fact that we can let things go,” Adams said. “They have a huge expectation for themselves on winning championships and I was so proud of them for the way they focused the last two weeks after what happened in Ohio.”

Adams said she was disappointed with the Sunday loss but gave full credit to Marshall for the way they stifled the Owls’ opportunities. “I thought in the first half we created tons of opportunities and were unlucky,” Adams said. “I am very disappointed we didn’t get any goals in the first half. Kudos to Marshall for continuing to fight. Marshall is known for being a blue-collar, hard-working team … that was no surprise [to us].”

Wolfe, who played 90 minutes in both weekend contests in the defensive backline, said Rice needs to play a full 90 minutes of quality soccer if they want to continue winning games.

“Throughout the game we can’t allow any dips in our performance,” Wolfe said. “Conference USA teams are too good to not play our best for a whole game … They will capitalize on our mistakes.”

Hargreaves, who scored her first goal of the season on Friday, said she is excited to return to Rice next weekend to play a home game for the first time since Sept. 9.

“We are really excited to be back at home in front of our fans once again,” Hargreaves said. “Playing under the lights on our own field is one of the greatest feelings in the world.”

The Owls will return to Holloway Field this upcoming weekend to continue Conference USA play against two opponents from Florida. On Friday, Oct. 2, the Owls will take on Florida International University. Following this matchup, Rice plays Florida Atlantic University on Sunday afternoon.