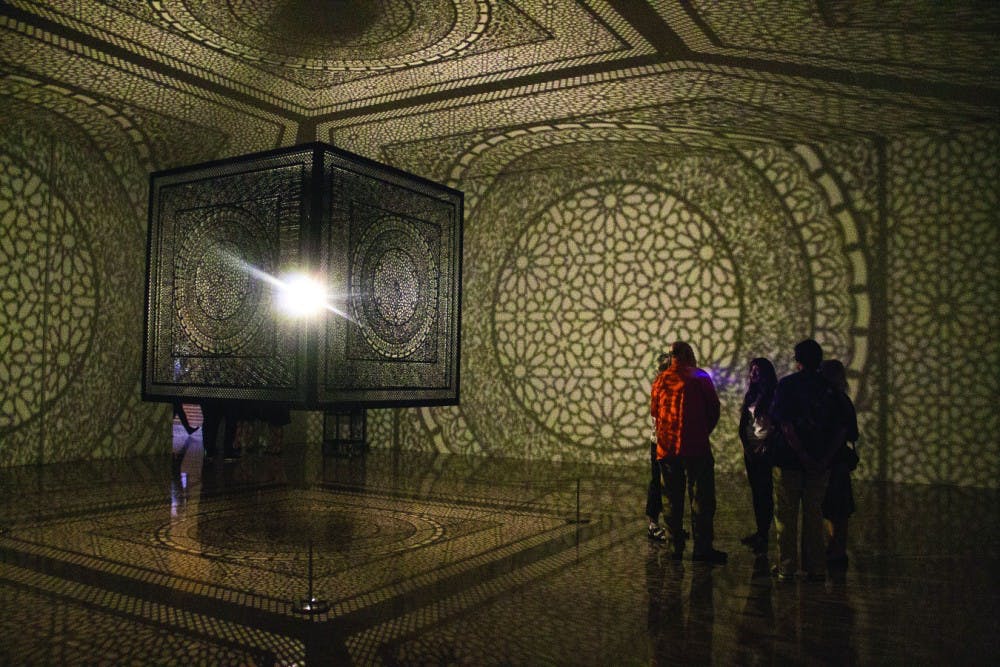 
Anila Quayyum Agha’s “Intersections,” which opened Sept. 24 at the Rice Gallery, plays with shape, light and shadow to create a powerful viewer experience.

A six-foot cube hangs from the ceiling in the center of the gallery, with a single light bulb suspended in the middle of the box. Together, they manage to fill the entire space, from ceiling to floor, with patterned shadows that are composed of lines and geometric shapes. The details of the cube are defined and delicate, but they become distorted as they fill the rest of the room; the patterns are stretched and expanded on the walls. It is impossible to step into the gallery without becoming yet another piece of the art: The light and shadow from the center of the room are cast onto the viewer’s body, while the viewer’s shadow is thrown to the floor and the wall behind them.

Artist Anila Quayyum Agha’s piece, “Intersections,” opened the evening of Sept. 24, and is currently on display in the Rice Gallery with the support and collaboration of the Boniuk Institute for the Study and Advancement of Religious Tolerance.

The previously mentioned interaction between viewer and piece was one of the most important elements of “Intersections.”

“I wanted to make a space that would actually welcome people from all walks of life,” Agha said. “So if you look at your shadow, it becomes anonymous, and it also becomes a part of the space.”

For Agha, “Intersections” is a culmination of many themes she has worked with over the years, such as gender, religion, race, light, history and cultural appropriation. She spoke about the relationship between decree and tradition, gender and literacy, East and West. The piece’s simplicity, contrast and size all contribute to its ability to bring together many different facets and topics into one intersectional piece, hence the name “Intersections.”

Agha grew up in Pakistan, where her interest in gender originated. “As a young woman and an adolescent growing up in Pakistan … I spent a lot of time inside rather than outside in public spaces,” Agha said. “Women in Pakistan often are discouraged to go to school, or the parents usually have no money for the girls [to] go to school and they end up almost being like servants to the family.” The original conception of the piece, however, came during her 2011 trip to Spain when she visited the Alhambra, a Moorish palace and fortress located in Granada. She was struck by the way the beauty of the Alhambra put tourists in a state of awe.

“I noticed that there was a hush in the audience, they were all talking very softly, even amongst themselves,” Agha said. “I’d seen these types of things in mosques in Pakistan, in India, in the Middle East, so it wasn’t an unfamiliar space, but it seemed to welcome everybody.”

As she further contemplated the space, she found even more fascinating connections. The palace, which is centuries old, is filled with new tourists. The palace was built in Spain during the rule of the Moors, and Jews and Christians worked on it as well.

“In my mind it all kind of coalesced to create a moment where you can … bring history, concepts, light, literacy, everything together to create this moment of intersection,” Agha said. “It’s almost like enlightenment. So, all of the threads that I work with … came together in that moment.”

The Alhambra is filled with Islamic geometric patterns, which Agha photographed and later sketched when she returned to the United States. She then cut the patterns out of paper and stitched these pieces together, noting the way light filtered through the paper. Agha was amazed by the shadows that the patterns created and set out to create a piece which could do something similar on a grander scale.

The piece is made of wood, which she painted black after using a laser-cutter to cut out the delicate, intricate patterns. It took Agha a year to complete the piece, due in part to her simultaneously teaching a full load as an associate professor at the Herron School of Art and Design. “Intersections” won the Public Vote Grand Prize and tied for the Juried Grand Prize at the 2014 ArtPrize competition in Grand Rapids, Michigan.

Be sure to check out “Intersections,” and bring a friend or two: The patterns are especially fascinating when they’re projected onto other people. The piece will be on display at the Rice Gallery until Dec. 6, and the gallery is open Tuesday through Sunday each week.