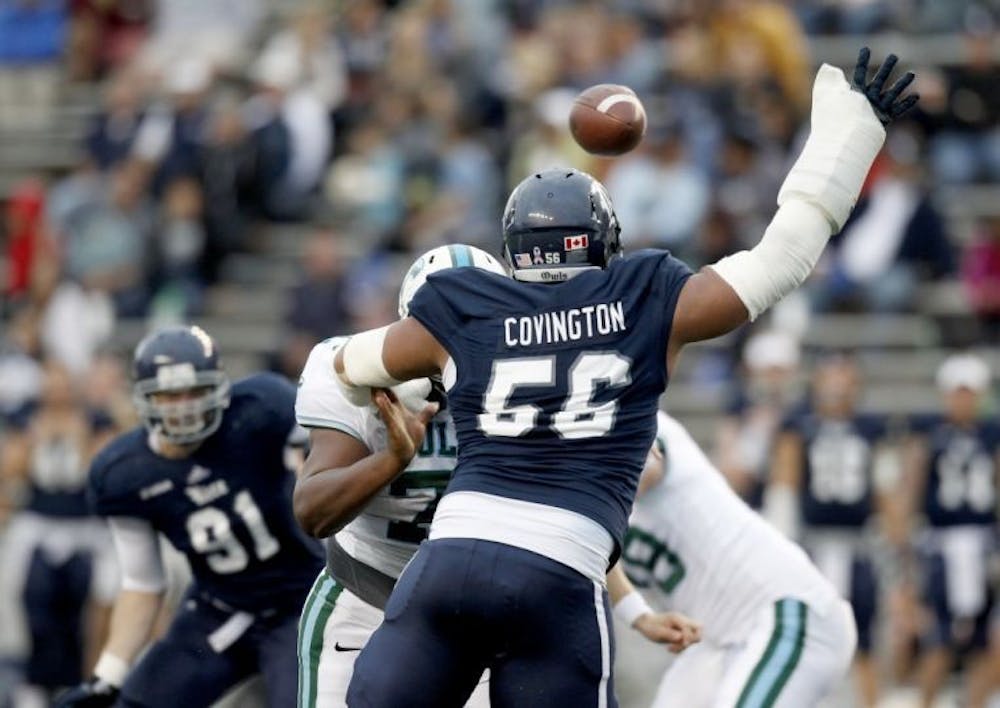 Four years ago, 17-year-old Christian Covington traveled from Canada to play football at Rice University. Covington believed that Houston would be a short stop along his journey to the NFL. On Sunday, when Covington suited up to play with the Houston Texans, our east Texas town became the rookie’s new home.

When Covington arrived at Rice University in 2011, he was small for his position, but what he lacked in size he made up for in quickness and intellect. Covington’s father, Grover Covington, was one of the greatest pass rushes to play in the Canadian Football League. Grover entered the CFL Hall of Fame in 2000 and passed his football knowledge down to his son.

Covington redshirted his first year on campus to get bigger and more mature, as he was only 17.

After a strong freshman season in which he tied for the most sacks among Conference USA rookies, Covington had his breakout season his sophomore year. He finished the year with 59 tackles, four sacks and 14 tackles for a loss and was named first-team All CUSA. The nation began to take notice of Covington’s pure skill set, and some believed he could be a first-round talent in the 2015 draft with a strong 2014 season.

Before his junior year, Covington was decorated with preseason awards. Covington was projected first team C-USA and appeared on the award watch list for the Outland, Rotary Lombardi, Chuck Bednarik and Bronko Nagurski awards. However, his season would be cut short by two different knee injures, the second of which ended his season. This left Covington with a huge decision: Would he return for his senior season or test his luck in the NFL draft? After much consideration, Covington chose the latter.

On May 2, the third day of the 2015 NFL Draft, Covington’s dream started to come true. That day, he was drafted by the Houston Texans in the sixth round, having to move only three miles down the street from his previous football field. According to Covington, it could not have worked out better.

“To be able to go from Rice and only have to move down the street to play for a team such as the Houston Texans, I couldn’t have asked for anything better than that,” Covington said.

Not only was it an easy move for Covington, but he was put in a situation where he could learn from two of the best defensive linemen in the NFL: J.J. Watt, two-time Defensive Player of the Year, and Vince Wilfork, two-time Super Bowl Champion. According to Covington, they have played a major role in his adjustments to the NFL.

“Both [Watt] and [Wilfork] have shown me what it takes to be a professional in this game, both on and off of the field,” Covington said. “Whether it’s helping me with my pass rush or guiding me through film study, they’ve been helping me progress as a football player.”

And if Covington’s playing career doesn’t work out, he might have a shot on Broadway as he has been featured in HBO’s “Hard Knocks,” which is following the Texans’ training camp this season. His most famous moment occurred when Texans Head Coach Bill O’Brien sent Covington back to receive a punt. However, this was not a normal punt return scenario. If Covington caught the punt cleanly, the players would each be able to leave the team hotel and return to his home.

Covington lined up and caught the punt cleanly, which led to a team celebration and someone off-camera saying, “Rice Got Athletes,” which has now become a frequent hashtag for Rice Athletics.

Covington has also has been constantly given praise by Coach O’Brien, other players and journalists. Each week he has improved to adjust to the greater speed of the NFL and his role as a nose tackle. However, Covington said he does not look at what the media is saying.

“I was told by my dad at a young age to never read your own press clippings,” Covington said. “I try to stay true to that to this day.”

Covington might not be reading his name in the articles and box scores, but Rice supporters each Monday will look as he has become a sense of pride for the Owls. Four years later and Covington is still making plays in Houston, but now, it’s on Sundays.