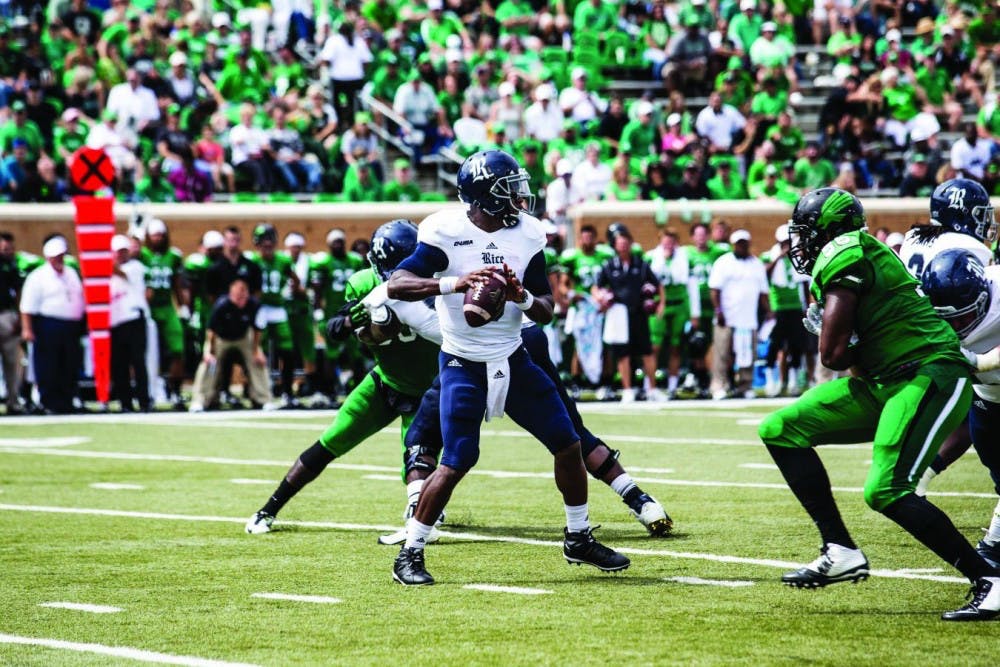 
Redshirt senior quarterback Driphus Jackson surveys the field during a 38-24 victory over the University of North Texas. Jackson, who had a career-best 373 passing yards, threw for three touchdowns on the afternoon. The Owls are now 2-1 and will next play the No. 5 team in the country, Baylor University.

The game had an uneven start for Rice, as their first two drives resulted in a missed field goal and a punt. The punt, however, proved to be the turning point of the game: Redshirt junior linebacker Tabari McGaskey forced a fumble on the punt return, and sophomore linebacker Emmanuel Ellerbee recovered the ball, igniting the Owls’ offense and giving them a first down at the North Texas 18yard line. Three plays later, Jackson found Parks in the endzone to give Rice a 73 lead early in the second quarter. Though the defense allowed a touchdown on the ensuing North Texas possession to give the Mean Green a 107 lead, the Owls retook the lead for good by scoring 31 unanswered points over the next 20 minutes of play.

Rice’s methodical, ballcontrol offensive strategy was on full display as they pos sessed the ball for 41:50 of the game. Jackson had one of the best statistical games of his career, passing for a careerhigh 373 passing yards and three touchdowns. Statistically, Parks had by far the best game of his career, as his 162 receiving yards and two touch downs similarly set career highs.

Junior running back Jowan Davis also had a strong game, eclipsing 100 rushing yards for the fifth time in his career in his return from injury. The difference in the game, how ever, was likely the turnovers. Rice’s defense and special teams were able to force three turnovers, which led the Owls to 17 points.

Head Coach David Bailiff said he was very satisfied by the victory over a program and coach he deeply respects.

"We knew this was going to be a tough game,” Bailiff said. “Anytime you play a Dan McCarneycoached team you’ve got to earn it, and you’ve got to earn it for four quarters. We realized that, and even when we got up 28 points you knew they were going to keep playing. That’s what they’ve always done. I am so proud of these guys.”

According to Bailiff and Jackson, Parks’ connection had a substantial impact in set tling his team down after the rocky start to the game.

“Dennis [Parks] is a big play guy, he al ways has been, and I’m really happy with the way he’s played the last two weeks,” Bailiff said. “Driphus [Jackson] all of a sudden got his momentum and started finding him. For whatever reason, when that happened, we relaxed and started playing a good brand of football. That’s what we’re capable of.”

Jackson, who was critical of his own per formance in the first two games of the season, said he was pleased with the improve ment in his play, but was not totally satisfied.

“I was better this week,” Jackson said. “There’s always room for improvement. I didn’t complete every pass; I went 29 for 39 today, so I’ll focus this week on the passes I didn’t make. We’ve got a good team, so I look forward to correcting my mistakes and playing a good Baylor [University] team.”

Bailiff recognized the strong offensive output of his team, but he said his team ulti mately won due to the turnover margin.

“The difference today was the three turnovers that we were able to turn into 17 points,” Bailiff said. “That is where the sepa ration came.”

Redshirt junior linebacker Alex Lyons elaborated on the defense’s effort, pleased with the turnovers generated by the Owls, but said he is seeking improvement elsewhere.

“Defensively, we did a good job,” Lyons said. “We have a lot of room for improvement. We limited them to 24 points, and most of them were on really big plays. But still, we did a great job of getting turnovers and it actually proved to be a big emphasis in this game.”

The team’s strong showing against North Texas should help it build momentum prior to playing nationally ranked No. 5 Baylor, who will likely be the Owls’ toughest test of the season. Led by Head Coach Art Briles, the Bears are nationally viewed as a contender to qualify for the College Football Playoff. Bay lor is currently ranked No. 1 in the country of fensively with 754 yards per game. Addition ally, Baylor has the second highest scoring offense in the country, averaging 61 points per game.

According to Bailiff, the team has to enter the Baylor game with confidence and keep Baylor’s offense off the field.

“We have to believe that we can do it and we have to play like we can do it,” Bailiff said. “They are going to throw it down the field. That’s what Baylor does. We’re going to try to do all we can to keep it out of their hands. But, we’re looking forward to it.”