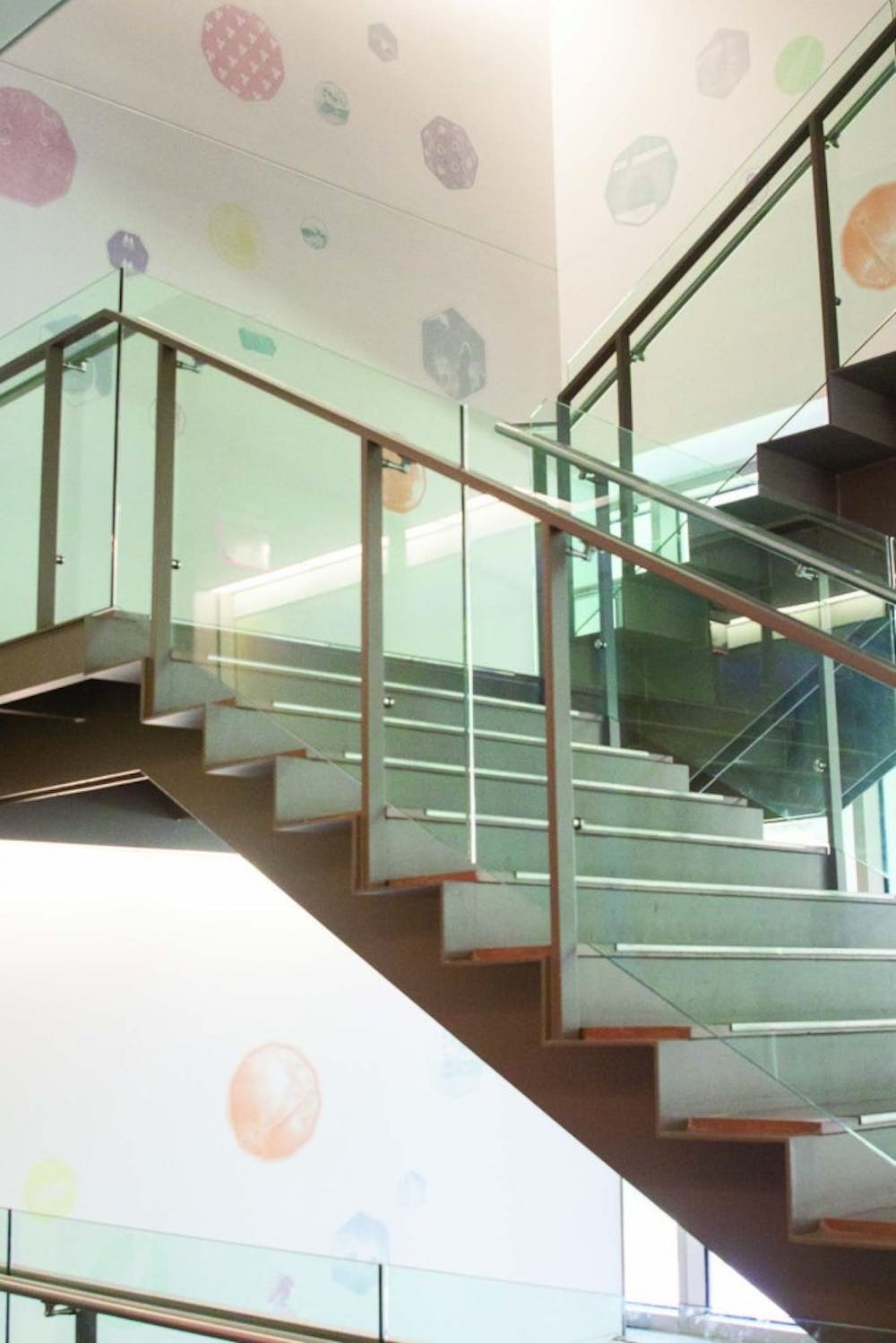 As of this year, physics and chemistry are not the only fields of study dominating the Brockman Hall for Physics. While the walls were once blank, new and returning students are now greeted by a scattered array of eye-catching ink medallions. The colorful orbs, which feature primarily STEM-related images, reflect a novel and striking intersection of art and science.

The catalyst for the piece, completed this year by Houston-based artist Debra Barrera and master screen printer Carlos Hernandez, was a policy enacted by Rice University President David Leebron in 2008. Caroline Walker of Rice Public Art explained that Leebron passed a mandate stating that all buildings constructed on campus had to reserve a section of their budget for art. While the mandate was praised by the Houston community, the university struggled to apply the policy to the first eligible building, Brockman Hall.

“It took a long time to find an artist that would be appropriate thematically,” Walker said. “And due to the fire code of the stairwell, we weren’t allowed to have anything expansive. … It had to be part of the wall and have no materiality.”

Walker said Rice Public Art encountered Barrera in 2014 when she was part of a show at the Contemporary Arts Museum of Houston, and decided soon after that she would be a perfect fit for the project.

“She’s really an up-and-coming artist,” Walker said. “Also, we knew that her work would thematically tie in because she had this interest in connecting the past and the present and the history of science.”

Rice Public Art also learned that Barrera is acquainted with Hernandez, a master screen printer famous for his eclectic work found everywhere from Austin City Limits posters to Pink’s pizza boxes. Barrera contacted Hernandez, and he agreed to make prints of her designs that could be permanently inked onto Brockman’s walls.

“We thought it was just great,” Walker said. “There would be no fire risk, but [the project] would also be archival and [thus] stable and safe.”

Barrera began the project by asking Rice faculty and staff to send in images related to their research and the history of their field of study. Once she collected them, she manipulated the pictures to reflect the various fields of exploration in simplified forms.

“It was essentially an open call,” Walker said. “And she took those images and refined them, crossed them and manipulated them to create the final medallions.”

The resulting images each represent a specific discipline within physics and astronomy, and are color-coded by field of study. Walker said that their circular structure means they are self-contained and thus could be scattered across the wall.

“They kind of have this free association thing going on on the wall,” Walker said. “This allows you to roam from one to the next with your eyes as they travel up the stairwell.”

Walker said the final product represents the intrinsic connection between art and science, and demonstrates how that connection can be directly observed.

“Artists are always looking to not only reflect the world, but redefine it or reinvestigate what it means to be in it,” Walker said. “And scientists are interested in the same thing, looking very closely and trying to name the mysteries of the world.”

Walker said Rice University is an ideal space for celebrating the art-science connection through public art due to its research-oriented environment and emphasis on discovery.

“It’s such a dynamic and exploratory environment,” Walker said. “It naturally begs for art on campus that’s not just a statement, but also a question.”

Walker said that eventually, Rice Public Art hopes to create an interactive component to the piece, or didactic, that allows students to engage with the work on a variety of levels. She said this will probably take the form of a website that allows viewers to learn more about each individual medallion.

“Our hope is that … students that don’t normally traffic through that building can investigate the collection online,” Walker said. “We want them to realize that art is not a refined subject that’s supposed to be separated from all other fields, but art is interested in other disciplines, too.”

“Asymmetric Seekers” is on display on campus at the Brockman Hall for Physics. More information can be found at publicart.rice.edu.