This set of terms is not used to describe the playing style of most athletes; while one set of adjectives (field general, dual-threat) describes certain types of quarterbacks, the other set (jump shooter, rebounder) describes a typical small forward in basketball. Jeremy Jones, how- ever, is not “most athletes.”

Jones, a 6-foot-5 freshman from San Antonio, TX, has taken on the rare challenge of play- ing both football and basketball at the Division I level. While it is uncommon — though not unheard of — for athletes to play multiple sports, the football-basketball combination is rarely seen, largely due to the vastly differing skill sets and training they both require.

David Bailiff and Mike Rhoades, the football and basketball head coaches, allowed Jones to play both sports. Jones played both sports in high school and also sought to play both in college.

According to Jones, the coaches’ helpful- ness was one the primary reasons he chose to attend Rice.

“Coach Bailiff was really open to it, and the Rice education was a real draw to me,” Jones said. “Our coaches in football and basketball are so good, and they go a great job helping me transfer back and forth.”

Typically, most NCAA athletes will play one sport during the season and spend the offseason doing strength training, improving conditioning

and conducting sport- and position-specific ac- tivities to help them refine their game. According to Jones, transitioning from football to basket- ball proved to be a physical challenge.

“I would definitely say there’s a difference in football and basketball shape,” Jones said. “In the first two weeks of [basketball] practice I was dying, and Coach [Rhoades] would be running me up and down the court. Eventually, he got me in shape and I got ready to go.”

Jones said the inherent differences between the two sports have made physical conditioning a challenge.

“In football, you’re going hard for anywhere from five to 10 seconds, then you get maybe a 25-second break, then you have to get right back at it,” Jones said. “With basketball, you could be running up and down the court for maybe two and a half minutes before a foul is called, the ball goes out of bounds or some- thing like that.”

Jones said he has found similarities between the two sports that have enabled him to im- prove his game in both sports.

Jones’ transition to two-sport NCAA athlete has made the little time he gets between sea- sons all the more important. Unfortunately, Jones’ past off-season was consumed by re- habilitation from shoulder surgery, which he delayed until the conclusion of his senior high school basketball season, further complicating his schedule.

“It was very tough,” Jones said. “I played my senior year of high school and had the surgery right after it. Coach Bailiff had an eye on it and everything. When I got here I was just doing re- hab every day. The strength training staff was really good, and they got me ready to go.”

Though Jones’ debut as a football player will be this coming fall, his work on the gridiron will center on improving decision-making and arm strength. For now, Jones averages 13.5 minutes, 2.0 points and 2.6 rebounds per game coming off the bench. It remains to be seen if Jones will earn playing time as quarterback.

Rice basketball will begin playing in the Conference USA Tournament in Birmingham, AL on Wednesday, March 11 against the University of North Texas. 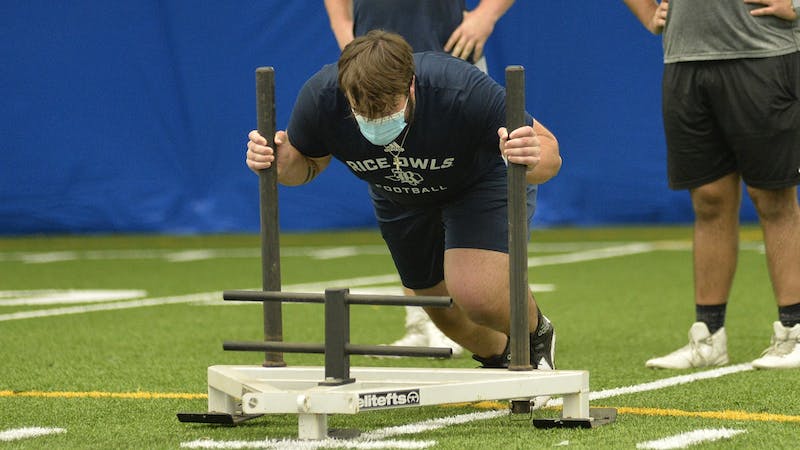