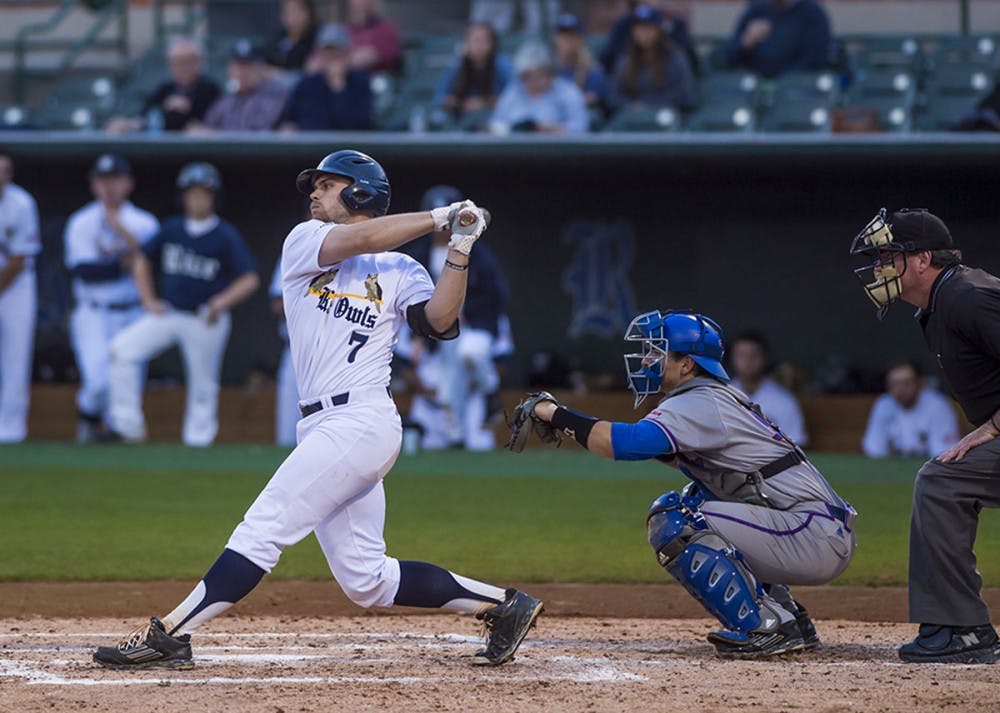 
Senior catcher John Clay Reeves, the preseason Conference USA Player of the Year, swings at a pitch during a three-game series against Louisiana Tech University, which Rice swept. The sweep marked the second consecutive conference series sweep for the Owls, who improved their record to 15-6 overall and 6-0 in conference. Rice will next play a three-game series against Old Dominion University.

After a 14-5 midweek victory over Texas State University, Rice headed into the weekend series against conference foe Louisiana Tech University and won all three contests. Rice finished 4-0 on the week and moved up two spots in the D1Baseball Top 25 ranking to No. 8 nationally. The Owls are now 15-6 (6-0 Conference USA) and have won seven straight games.

Beginning Friday night, the Owls first got on the board in the bottom of the third inning after junior catcher Hunter Kopycinski scored on an RBI groundout to take the 1-0 advantage. In the top of the fifth, however, a trio of base hits followed by a costly outfield error put Louisiana Tech on top 2-1 against junior pitcher Kevin McCanna.

In the eighth inning, a diving catch in right field by sophomore Charlie Warren stalled the Bulldogs. Rice then rallied for three runs in the bottom of the eighth after the first three batters reached with walks. Freshman Tristan Gray came through with a bases-loaded sacrifice fly to give Rice the 3-2 lead. Warren followed with a base hit to center for an insurance run as Rice held on for a 4-2 final.

In Saturday’s matchup, Louisiana Tech got on the board quickly by scoring two runs off junior starter Blake Fox in the opening inning. The Owls responded by posting two runs of their own in the bottom half of the inning on RBI singles by Warren and junior infielder Connor Teykl. The Owls added two more runs in the third after hitting three dou- bles to take a 4-2 advantage. The teams then went back and forth until the Bulldogs pulled ahead for a 7-6 advantage after eight innings. In the ninth inning, the Owls had just three outs remaining to work with, but quickly worked the bases loaded with nobody out before junior infielder Grayson Lewis hit a two-run single up the middle for the Owls. The base hit gave Rice their first walk-off of the 2015 season and guaranteed a series victory.

On Sunday, the Owls scored six runs in the first inning. Junior pitcher Austin Orewiler held the Bulldogs scoreless through the first five innings and left after allowing two runs on five hits through 6.0 innings pitched. Senior catcher John Clay Reeves finished with three hits and three RBIs, giving Rice the 9-2 win. The offense recorded double-digit hits for the 16th game this season and has yet to lose in C-USA play.

Assistant Coach Clay Van Hook said starting 6-0 in conference play has been a major boost of confidence for the team.

“It’s always big when you start conference strong from the standpoint of gaining some confidence,” Van Hook said. “When you have confidence, you get wins. More important than getting those wins is playing well, and I feel we have done that as of late on both sides of the ball.”

“I have full confidence in our hitters, so I had no doubt in our ability, but sometimes for young hitters it takes a little longer to make adjustments,” Van Hook said. “The best-hitting teams are the ones who can make adjustments quicker, and for- tunate for us we made them at the right time.”

Lewis said hitting the walk-off gave him one of the best memories of his baseball career.

“Obviously it felt great ... coming off the bench in that situation and looking for any way to help my team win.” Lewis said. “Getting it done and completing the comeback — there really is not a better feeling.”

According to Lewis, team chemistry has im- proved and contributed to the winning streak.

“We’ve been playing really [well] these past two weeks, and the chemistry enhancement is unbelievable,” Lewis said. “[We’re] looking to keep that going against [the University of Houston] and [Old Dominion University] and go game-by-game playing our best ball.”

Orewiler is currently leading the Owls in wins and innings pitched. He said his success comes from throwing strikes and going right after hitters.

“I’m just trying to attack the strike zone with all of my pitches,” Orewiler said. “I try to go right after hitters and use my defense to get outs. My defense definitely turned a couple of big double plays to get me out of some rough spots.”

The Owls will look to keep the winning streak alive when they face Old Dominion this upcoming weekend in Norfolk, Virginia for a three-game con- ference series. Old Dominion was the only other team in C-USA to earn an at-large bid to the NCAA tournament last season. First pitch is set for 5 p.m.