Writing on the wall: Sumi Ink 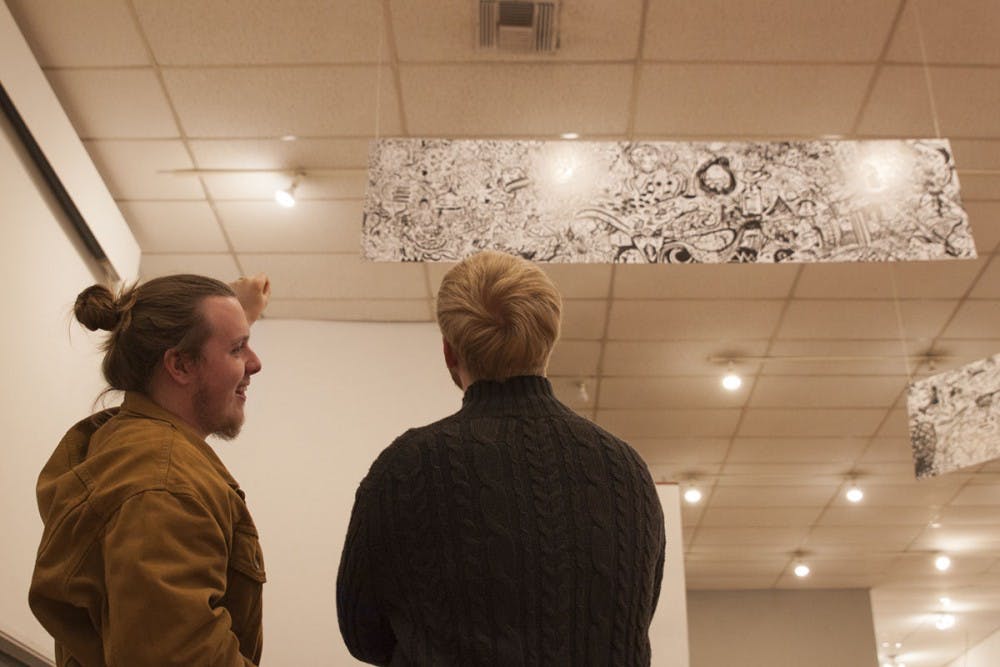 Last week, Rice students and Houstonians could be found fulfilling every 4-year-old’s fantasy: drawing on the walls. Specifically, they were participating in a unique collaborative art project that involved covering the Rice Media Center with a beautiful and eclectic amalgam of personal expression.

The scheme was planned by Sumi Ink Club, a Los Angeles-based organization established by artists Luke Fischbeck and Sarah Rara, as part of a movement using group drawing to bring communities together and positively impact social interactions.

The event was organized by the Rice visual and dramatic arts department and spearheaded by Rice professor and artist Natasha Bowdoin. Bowdoin secured an Arts Initiative Grant, offered by Rice to support projects that open people up to the arts, and used it to bring Sumi Ink to Houston.

“I really liked that [Rara and Fischbeck’s] idea is based on the premise of reaching out beyond an art-centric crowd, to all ages and backgrounds, and the concept that everyone can do art, it’s not just an elitist activity,” Bowdoin said. “I thought it would excite both people within the arts department and those outside of it as well.”

The group, which started in 2005, hosts events around the world at institutions, conferences and even casual public spaces, like parks. The group is nonhierarchical and highly participatory; all drawings must be created in the same black Japanese “sumi” ink of uniform consistency, anyone can add to someone else’s drawing and everyone must agree when the drawing is finished. Every event is free and open to the public, allowing the piece to truly rise from the community consciousness.

At every event, Fischbeck and Rara host multiple drawing sessions at various times during the week and weekend to maximize the variation in participants. At Rice, the drawing sessions took place at varying times throughout the week of Feb. 15.

“The idea is to get as many people in the community as possible to come out and draw — everyone from little kids to students to seniors,” Bowdoin said. “It’s truly collaborative; everyone works on the same drawing and adds to each other’s pieces, as opposed to just getting a little space to fill with your own work.”

After the event, there was a community-wide celebration with food and drink and an unveiling of the final piece, accompanied by walkthroughs and a talk by Fischbeck and Rara.

The Rice Media Center creation, which closely follows the installation of the Baker College mural and Soundworm projects in the fall, is part of a larger movement in “public art” at Rice. Bowdoin argues, however, that this project not only fits the standard definition of public art, but takes it a step further.

For instance, she points out that all of the work resulting from Sumi Ink events may be freely disseminated. Images of the work are uploaded to a public domain and can be accessed by anyone and used for any purpose.

“Everything that is created in Sumi Ink events, held around the world, is open source,” Bowdoin said. “After the event, people can take photos, make T-shirts, make books. There’s no copyright or individual ownership.”

Bowdoin also notes that Sumi Ink projects are much more community-oriented than traditional public art projects, which involve an artist being invited to a city to construct a work based on their personal vision.

“This project is completely sight-responsive; it uses the people who will later view the work,” Bowdoin said. “It is made by the people and for the people in every respect.”

Though the drawing sessions are over now, the final piece can be viewed at the Rice Media Center. More information about Sumi Ink Club may also be found at their website sumiinkclub.com.