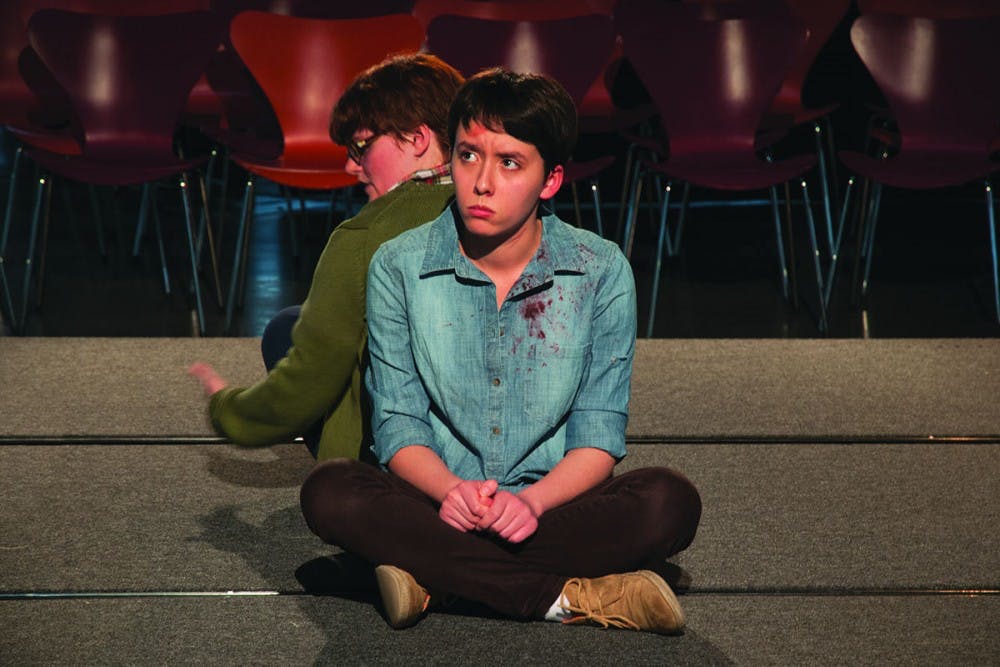 Photo by Jake Nyquist | The Rice Thresher
McMurtry College freshman Lenna Mendoza tackles the role of Katurian in McMurtry’s production of The Pillowman, a dystopian play set in a totalitarian state.

Of all the plays shown at Rice University in recent memory, few have been as haunting, terrifying or cleverly executed as McMurtry College Theater’s most recent endeavor, The Pillowman, written by Irish playwright Martin McDonagh and directed by McMurtry College senior Grant Raun.

Pillowman begins with the interrogation of an author named Katurian (McMurtry College freshman Lenna Mendoza), whose short stories all too often feature the grotesque murders of children. She is brought in for questioning by an unrelenting duo of bad cop-bad cop detectives, Tupolski (Wiess College junior Sean Doyle) and Ariel (Baker College senior Alyssa Dugar), about the recent murders and disappearances of three children who have been killed in the same fashion as prescribed by the unpublished stories.

As the play progresses, the audience learns the Pillowman is a difficult play to act, with characters that range from abusive alcoholics to murderers to the psychologically insane, and with lines that beg for an Irish delivery. This is no problem for this production’s cast, however, which mobilizes — for the most part — its immense talent to overcome any obstacles.

Doyle and Dugar are captivating as a fierce and violent detective pair. Dugar’s performance as a crazed and torture-happy, yet vulnerable and insecure cop keeps the audience on edge and fearful of her next outburst. Doyle, although sometimes hard to understand, counterparts as a flippant and psychopathic partner who chills to the bone. Together, the talented duo moves the play forward in a terrifying and fast-paced tension.

Though the talent in this well-cast play is truly robust, the best performance comes from Smith as Michal, Katurian’s mentally disabled sister. Smith oscillates between expressing the cruelty of the devil and the innocence of a puppy with complete mastery, leaving the audience unsure whether to fear or pity her. A good script, combined with Smith’s superb acting, brings out the dark humor of the play in a way that challenges traditional morality.

The weakest performance of the lot — though it would not seem so weak if it was not paired with such gargantuan talent — comes from Mendoza in the lead role of Katurian. Though strong and unflinching in the play’s most emotionally potent moments, Mendoza falls flat when telling Katurian’s stories or reciting one of the many lengthy monologues assigned to her character. She is best when paired with other strong cast roles and tense situations, which, fortunately for the audience, occurs often.

Acting aside, what truly makes this version of The Pillowman stand out are the clever design tactics used to enhance the fear-inducing aspects of the play — a tribute to Raun’s talent as director. The set design is imaginative and perfectly suits the play’s needs; it is set in the round, with audiences surrounding the stage at all sides. As a result, the audience both represents the ever-present watch of a totalitarian police state and bears witness to the characters’ most intimate moments and, sometimes, their minds. Multiple exits and entrances to the stage allow characters to pop up seemingly out of nowhere for shock value. Meanwhile, direct and simple lighting and minimal props (by Lovett College freshman Ronnie McLaren and McMurtry College freshman Madison Blattel, respectively) further focus the play.

The two most ingenious moves were the use of sound (McMurtry College senior Sean Harger and freshman Rohit Kavukuntla) and costume (Normoyle) to enhance character. Chillingly suspenseful surround-sound music aids scene changes and moves long monologues forward, while prerecorded chanting voices are used to convey the scariest instances of dialogue. The costumes are simple but powerful, using symbolic colors and aptly predictable uniforms to improve but not distract from the audience’s perception of character. Cleverly, black nylon is used both as costume and prop to depict death and darkness.

The Pillowman may not be a play for the lighthearted, but it is a play for the artistically minded and is well worth a watch. This production has truly brought at all the stops to make it what it is, and it does not