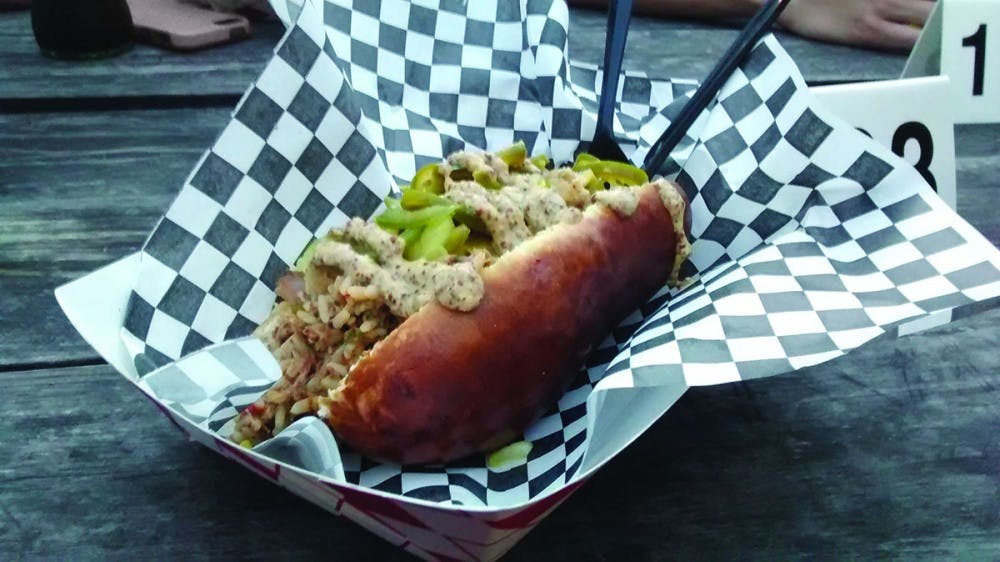 Don’t try Googling the Moon Tower Inn. Their website www.damngoodfoodcoldassbeer.com simply instructs visitors to “get off the damn internet and get your ass to 3004 Canal St.” There’s no phone number or menu — just a black background and very plain instructions. But even though the website seems unhelpful and unwelcoming, anyone who visits the outdoor bar in the Second Ward is in for a pleasant surprise. The bar itself is every bit as irreverent as the website would lead one to believe, but it’s not unwelcoming; it’s simply unpretentious to the extreme. It’s certainly the only place in Houston where customers can buy a “Fuck Foodies” T-shirt while ordering a venison hot dog with red wine and blueberries to go with one of 66 beers on tap.

It’s hard to describe Moon Tower Inn. On one hand, it’s an outdoor bar that specializes in hot dogs and beer. On the other, the hot dogs come topped with foie gras, marsala and berries; its beer list includes limited-edition brews with names like Clown Shoes Blaecorn Unidragon and Southern Star Black Crack. Moon Tower’s biggest specialty is their wild game pretzel dogs, which are among the most creative and delicious hot dogs in Houston. The wild boar dog, with garlic marsala and provolone, and the duck dog, with white wine and foie gras, are especially impressive and come heaped with toppings ranging from feta cheese to creole mustard for only $6.96.

The sandwiches and burgers are also excellent. The Cheech is a satisfying half-pound burger loaded with roasted poblano peppers, bacon and sambal mayo. Its counterpart, the Chong, is also satisfying, and comes with pickled jalapeños, creole mustard and a sunny-side-up egg that make for an odd mix of salty, sour and spicy.

However, the sandwiches are more consistent than the burgers. The Orgasmatron isn’t as filling as the other burgers and dogs, but it’s an especially tasty mix of flat-ironed ham, pancetta and bacon served with chèvre and pepper compote. The Morning Wood, maybe the only burger or sandwich whose name relates to what’s on it, is a greasy but delicious mix of bacon, egg, cheese, hash brown bits and onion marmalade.

While Moon Tower Inn is definitely not vegetarian friendly, there is one vegetarian option, the Infamous East Side Vaggieburgler. The only item on a portion of the menu marked “For The Damn Hippies,” the patty is made of black beans, beets and rice and is topped with cilantro, chèvre, onions and sambal mayo. As good as the cooks at Moon Tower are with meat, it feels lacking compared to the other items on the menu. But as a vegetarian option, it’s still better than many other less-inspired veggie burgers.

Aside from its sandwiches and hot dogs, Moon Tower’s biggest asset is its impressive “tap wall,” which boasts 66 different craft beers at any time. The beer list leaves no stone unturned as far as style goes: Hefeweizens, nitro beers, ciders, lagers, Belgian styles and IPAs can all be found in abundance for between $4 and $7 a glass. For a little more money, plenty of limited edition Christmas ales and high-ABV barley wines are available as well.

Despite what their “Fuck Foodies” T-shirts suggest, Moon Tower Inn is a paradise for foodies, beer enthusiasts and anyone who gets excited about good eating. All that matters is that customers enjoy the food and leave their pretension at the door.