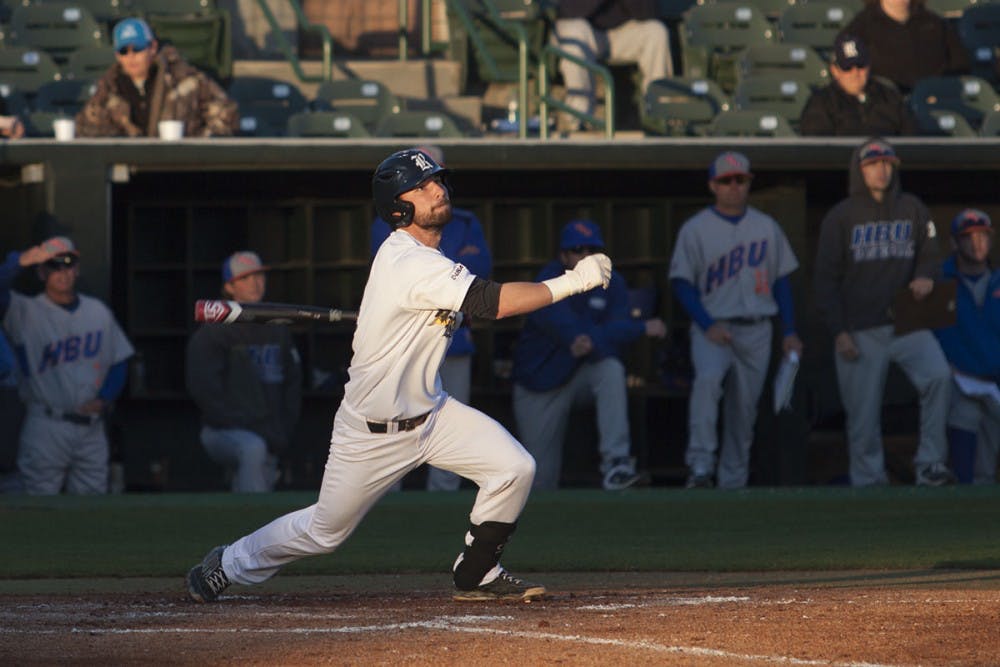 Photo by Aaron Hou | The Rice Thresher
Baseball vs HBU

Following a 5-2 home victory over Houston Baptist University on Feb. 17, the Rice University baseball team traveled to Tucson, AZ to face the University of Arizona. Rice won both the Friday and Sunday games, giving them the series victory and improving Rice’s record to 5-3.

Junior pitcher Kevin McCanna started Friday night, pitching 6.0 innings and allowing three runs on four hits. The Owls’ offense connected for fourteen hits and drove in eight runs. Rice senior duo of Ford Stainback and John Williamson led the charge offensively. The two combined for five hits and three RBIs on the afternoon. Owls junior closer Matt Ditman came into the eighth inning with the bases loaded in an 8-5 ballgame and secured a crucial two-out strikeout. He went on to pitch a scoreless ninth inning to clinch the victory by the same score and grant McCanna his first victory of the season.

Saturday’s matchup featured a similar start to Friday’s game when the Owls scored two runs on a bases-loaded single by junior Connor Teykl in the top of the first inning. The Owls later tacked on one more run in the third inning off an error to take a 3-0 advantage. With a 6-5 lead headed into the ninth inning, the Owls committed four errors in the inning and conceded a steal of home plate to lose 7-6.

On Sunday, back-to-back doubles by Stainback and junior shortstop Leon Byrd helped manufacture two runs for Rice in the first inning for the third straight game. In the seventh inning, a costly error by senior catcher John Clay Reeves allowed the tying run to score, and the game was even at 4-4 through seven innings. In the top of the 10th inning, freshman Ryan Chandler hit a leadoff double and scored after a throwing error by Arizona at third base. Reeves added an insurance run in the inning, giving Rice a 6-4 lead. Junior Austin Orewiler earned the win for the Owls, shutting down the Wildcat offense for the final 3.1 innings, allowing one hit and walking zero batters.

Despite the loss in Saturday’s game, assistant coach Pat Hallmark said the Arizona series was important for Rice’s ranking.

“[Road wins are] the best kinds of wins you can get,” Hallmark said. “Anytime you can go on the road and win a series it’s a huge boost in terms of where our RPI will be. We understand that it’s just one weekend … but it was a major boost for the team.”

Hallmark said the team’s habit of trying to do too much led to the 10 errors over the weekend.

“On defense, we need to play more relaxed and a bit more confident,” Hallmark said. “We know physical errors are part of the game, and we have to forget [them] as soon as they happen. They do not come from a lack of talent, because I feel we are super talented at every position.”

Rice totaled 43 hits in the series, keeping the streak of averaging double-digit hits to start the season. Williamson said having a complete lineup that can drive the ball is a huge advantage for the Owls.

“Hitting is contagious and … having a stacked lineup from start to finish is huge for us,” Williamson said. “If we ... get people in scoring position and execute the way we are taught to, we have been hitting the ball real well and driving guys in.”

As a senior, Williamson said this team has the best team chemistry he’s seen.

“We’ve faced some adversity in terms of having close games,” Williamson said. “That is really going to pay dividends in the postseason.”

The Owls host Stephen F. Austin University on Feb. 25 at 4:30 p.m. before hosting a four-game series this upcoming weekend at home against Stanford University. First pitch is scheduled for Friday, Feb. 27 at 6 p.m.