Album Review: J Tillman's I Love You, Honeybear - A- 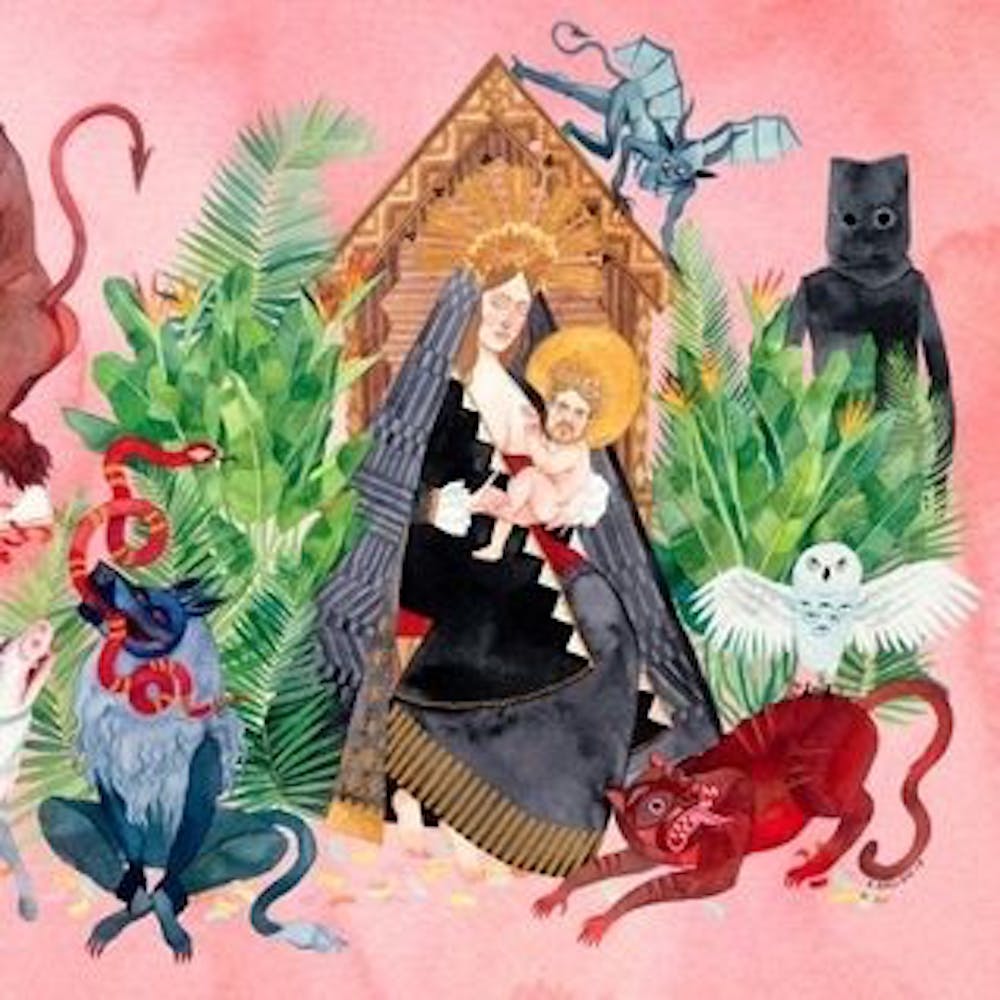 Photo by Courtesy Sub Pop | The Rice Thresher
I Love You Honeybear provides a deep meditation on middle age, fatherhood, and marriage

The modern music scene of the Pacific Northwest was crafted for artists like Father John Misty, aka Josh Tillman. Raised by a pastor in an evangelical household in Virginia, Tillman escaped the seemingly overshadowing influence of Christianity and the church by moving to Seattle and entrenched himself in the folk music scene. He spent time engaging in artistic collaborations (he drummed for Fleet Foxes and toured with singer-songwriter Damien Jurado) and using psychedelic drugs — he cites an extended mushroom trip as the inspiration for his religious moniker. His complete 180 from one uniquely American lifestyle to another inspires the scathing cynicism and political commentary abundant in I Love You, Honeybear, his LP as Father John Misty (Tillman has released several other records under his own name). He intersperses it with anecdotes about the new American domestic life, which he says is characterized by capable husbands that can still drink and smoke and hate and make love and search for meaning without compromising their stability.

Tillman’s sonorous, arresting tenor is surprising, given his intense declarations that the record is shocking in ways other records are not in these intensely progressive times. “The Night Josh Tillman Came to Our Apartment” is a beautiful piece of ’60s era folk pop (think Peter Paul and Mary), which includes vibraphone and glistening guitar lines. Yet, it is also one of the record’s most detailed, seething, “fuck off” tracks, relegating a former musician-lover to the status of entitled bitch: “She says, like literally, music is the air she breathes / And the malaprops make me wanna fucking scream / I wonder if she even knows what that word means.” It is one of the best moments in music thus far in this young year, a perfect manifestation of the genre-bending and intensely personal songwriting that is required of acts intending to separate themselves from the masses.

Elsewhere, Tillman takes broader swipes at American culture, such as in the gorgeous black comedy “Bored in the USA.” A response to Bruce Springsteen’s croon of pride for the blue-collar patriotism of his homeland on the namesake, “Born in the USA,” Tillman’s song laments his growing dissatisfaction with a country whose leaders refuse to cooperate for the good of those who serve, whose progressive idealism is constantly at odds with a nation founded on conservative morality, whose students are unable to find jobs while their debts continue to mount. “Oh they gave me a useless education, a subprime loan, on a craftsman home / Oh save me white Jesus!” A cruel and ironic sitcom-style laugh track hangs in the background, a representation of the humor inherent in an artist’s meager attempt to express disenchantment with the greatest country on Earth.

The recently married Tillman tackles fear of classical domesticity on the raucous “The Ideal Husband,” in which he shouts, “I said ‘Baby I’m finally succumbing,’ something dumb like ‘I’m tired of running’ / Let’s put a baby in the oven, wouldn’t I make the ideal husband?!” The grittiness of 21st century love and marriage is further stripped bare on the opening title track, where the album’s very first line, “Oh, honeybear, mascara, blood, ash and cum / On the Rorschach sheets where we make love” characterizes him as an intensely critical millennial who doesn’t pull punches. Any cursory listen through this superficial love track may leave the listener with little more than some marching drums and brass, and miss the sarcasm laden in Tillman’s crooning chorus of “I love you honeybear!”

Such is the entirety of Honeybear, an intricate and delicate record. There is a dark humor to Tillman’s overwhelming cynicism, however, and he’s certainly in on the joke — a joke that extends to the over-the-top sincerity of his lush folk arrangements. Honeybear serves as a mirror reflecting back on our own society: a self-critical, disaffected and anesthetized generation that still finds a voice of protest despite the surface-level beauty that is large houses, individual freedom, competitive enterprise and the highest GDP in the world. Father John Misty serves as nothing less than the preacher of the word.