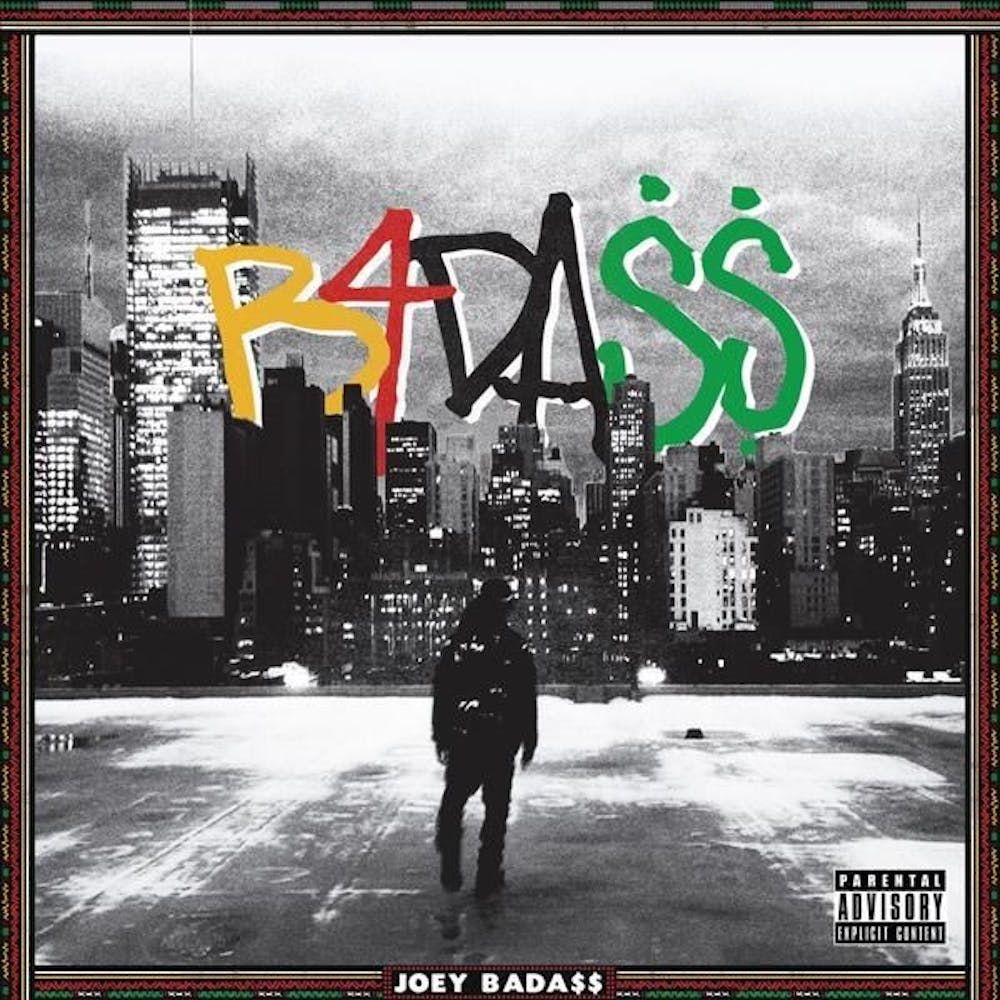 In 2015, anyone with a MacBook and a microphone can be an emcee. Sifting through the throngs of budding new rappers can be an overwhelming task, with historically rich hip-hop communities like Houston all but saturated with talented artists ranging from Grammy winners to Willy’s Pub Beer n’ Beats contributors. And while the Internet contributes to the oversaturation, it can also be a tool, for better or for worse, for highlighting rappers that do deserve to make it big. Fame can arise from unexplained blog hype, a shoutout tweet from a famous celebrity or just pure technical prowess and the uncanny ability to strike a vein in listeners. Brooklyn’s Joey Bada$$ belongs to the latter kind: a quick listen to this 20-year-old, socially conscious and fiercely deft rapper is all that is needed to explain the hype surrounding his debut LP, B4.DA.$$.

In the massive wake of Kendrick Lamar’s semi-autobiographical landmark good kid, m.A.A.d. city, Joey Bada$$ paints a portrait of life for youths in a drug- and violence-marred swath of New York. Storming the gates on opener “Save the Children,” Bada$$ declares, “Peace means harmony, not war and armory / But fuck that, cock your gun back, the survival of the fittest.” As part of  new breed of rappers that is able to question and critique the lifestyle preached to them by emcees of the past while accepting its place in society, Bada$$ behaves less like an actor and more like an observer as he narrates his own urban lifestyle. On the excellent “Hazeus View,” Joey analyzes God and his neighbors, singing, “And we probably share a train or two / But I can’t see what I can relate to / Hey Jesus will I ever get to see you through my haze?” over a low-key, tinkling piano beat.

Classic themes of lyrical hip-hop pop up throughout the record. “Paper Trail$” reflects on newfound fame and money; but, rather than boasting, Joey reveals the negative impact money can have on a teen who grew up with very little, rapping, “They say money is the root of all evil / I see money as the root of all people / ‘Cause we all follow paper trails / And everybody gotta pay they bills.” The jazzy, chilled-out “Piece of Mind” evokes Nas, providing a tale of a friend’s incarceration: “It’s bugged out ‘cause I know you tryna see your child / I just gave Will a lil’ something for your baby mother.” The juxtaposition of heavy, aggressive lyricism and eerie, spacey beats effectively sets the album in a dark underworld version of Brooklyn.

The series of tracks comprising the back of the album shifts to a more monotone, moody production style, and is a bit of a letdown following the poignantly aware and gorgeous opening six tracks. Choruses are reduced to simple repetition and verses lack focus. Yet, Joey’s style is still unmistakable, and hissharp turns and bouncing cadence are sufficient to carry the record through the second half.

Standout track “On and On” features a wonderful R&B inspired refrain (“Maybe I’mma flyyyyyyyy away”) and describes Joey’s own personal writing history, his loss of friends to violence and his consideration of his own mortality. “Picked up the pen that’s when I drew my first blood / Happiness is temporary always has been / I just lost another but sometimes I win.” This song embodies the greater message present on B4.DA.$$: Joey’s cathartic writing experience is only a temporary escape from the greater social unrest and the inevitability of an untimely death. Paradoxically, these tracks preach a message known to those in Joey’s circle, but are perhaps more resonant and painfully raw for his prime audience: suburban white kids huddled around laptops and in cars, mouthing the lyrics while wondering what life in the projects is really like.

Though the record slows down again late on the back end, the final track “Teach Me” sticks out like a sore thumb. The repeated chorus, sung by guest vocalist Keisza, of “Let me teach you how to dance, I’mma teach you how to dance!” over a breakneck salsa beat brings to a head the joy and release derived from the simple gesture of moving one’s feet to music. After a run of dark, thought-provoking material, Joey leaves us with a banger, as if all the pain and introspection on the record can melt away on the dance floor. We are left wondering if Joey’s ultimate message is not one of urban awareness and struggle, but instead one of optimism, of reveling in life’s simple pleasures even while the world around us burns.