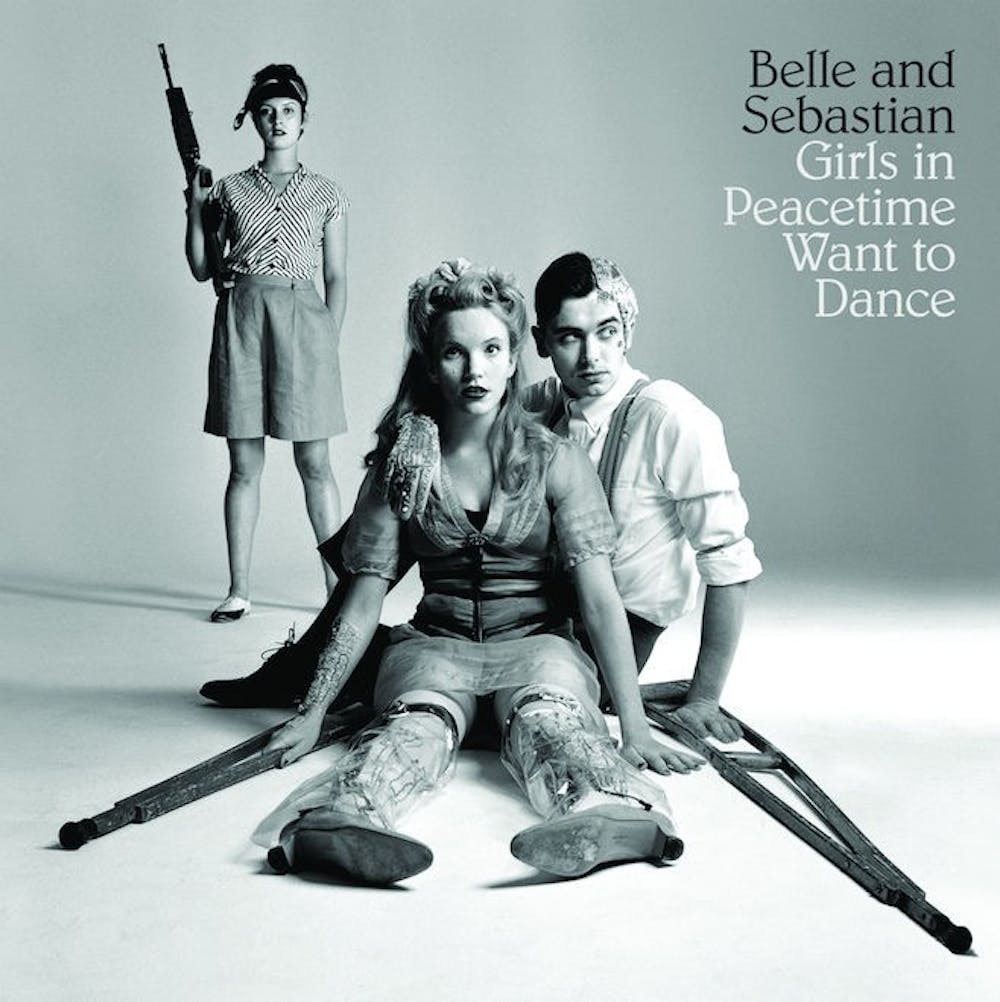 If you were a teenage outcast circa 1996, holed up in your room, writing the name of your crush over and over in your diary, staring at yourself naked in the mirror and covering your walls with posters of your favorite indie movies and bands, then Belle & Sebastian would have been your best friend. Bursting onto the Glasgow scene out of nowhere in 1995, the group of seven poor, lanky, awkward 20-something outcasts filled two albums with stories about high school kids who were too smart for their own good, attempting to make sense of the feelings and emotions that plagued their everyday lives. But the same teenage outcasts in 2015 would have nothing to do with our present-day Belle & Sebastian; those 20-somethings are now in their 40s and their new record, Girls in Peacetime Want to Dance, is riddled with slickly produced synth-pop dance tracks while the highly-detailed stories have been replaced by wilting cliches (with a few blatantly political forays thrown in for good measure).

Lead singer, chief songwriter and founder Stuart Murdoch has always been a talented writer and lyricist. His airy voice, lighter than a feather, has a knack for picking out beautiful melodies, and his lyric sheets demonstrate a rare ability to express painful, repressed emotions through the creation of characters and their experiences with the mundane. So when he uses the slow, burning, delicate and string-filled “The Cat with the Cream” to explain his mystification with British politics, using lines like “Down in the old city chambers, men in frocks debate the policy changes,” it makes you start to wonder if maybe the guy’s running out of ideas.

But Belle & Sebastian hasn’t written any string of particularly resonant songs in over a decade. And that was only half of their formula; the group is still a seven-piece, their members having remained largely intact over 20 years and their style of light, catchy twee-pop has always sounded like a group of people who know exactly which melodic turns their bandmates will make at any given moment, who know when to add more and when to add less. And although 2000s Belle & Sebastian has added more synthesizers, more string sections and more computers, they will never be mistaken for anyone else; their sound is uniquely theirs and instantly recognizable.

But Girls in Peacetime goes in an entirely new direction: dance music. And not 2015 dance music, but more of an 80s new wave style. Lead single “The Party Line” is a bumping, late-night lounge burner featuring jazz flutes straight out of Night At The Roxbury. And it’s really catchy. The chorus of “Jump to the beat of the party line!” repeated over and over is a bit of a drag, but the funky guitarwork and dark, minimalist verses give the song a mysterious, smoky edge that can be difficult to capture. Unfortunately, the other dance tracks on the album are truly awful. “Enter Sylvia Plath” is seven minutes of glam-pop reminiscent of the soundtrack to some low-budget 90s sci-fi film. “Perfect Couples” tries to be cute with bongos and spoken word sections, but the song is ultimately forgettable save the obnoxious chorus jingle of “Perfect couples — they’re breaking up!”

Sarah Martin, the band’s violinist and assistant songwriter, contributes two rather boring pieces of filler: the mundane, synth-drenched dance track “Power of Three,” alongside the rollicking “The Book of You.” The latter isn’t too bad a love song, but features such cringeworthy lines as “I want the world to see that I’m the one for you and you’re the one for me.” Often the value of a Belle & Sebastian record can be gleaned by how many tracks are written by someone other than Murdoch, and with three out of twelve, Girls In Peacetime doesn’t hold up well.

The best song on the album, the beautiful strummer “Ever Had a Little Faith?” is classic Belle & Sebastian; the pattering drums and the lilting, interwoven guitar lines behind Murdoch’s soft vocals are a wonderful change of pace after “Perfect Couples” and “Enter Sylvia Plath,” and Martin’s violin line is truly gorgeous. Of course, in an interview, Murdoch explains that this song was written in 1995 and forgotten until now. Go figure.

Not all of these tracks are so bad; opener “Nobody’s Empire” is a decent piece of pop with some nice, detailed lines from Murdoch’s life as he reflects on his younger self, and the stomper “Allie” is reminiscent of Belle & Sebastian’s transition period, a sinister track with some crunchy guitar work by the underrated Stevie Jackson, who pulls more than his weight on this record when given the opportunity. But the four or so decent tracks fail to stand out against the five or six repetitive pieces of fluff that grace this record. Belle & Sebastian sounds like a group of close friends who still enjoy making music together but have ultimately run out of ideas. The record sounds exactly like what it is: dance-pop made by aging 40-something indie musicians. By attempting to blend dance and electronic music with the classic Belle & Sebastian sound, both aspects are severely compromised, and the result is an unfortunate mixture of that is both mediocre and annoying.