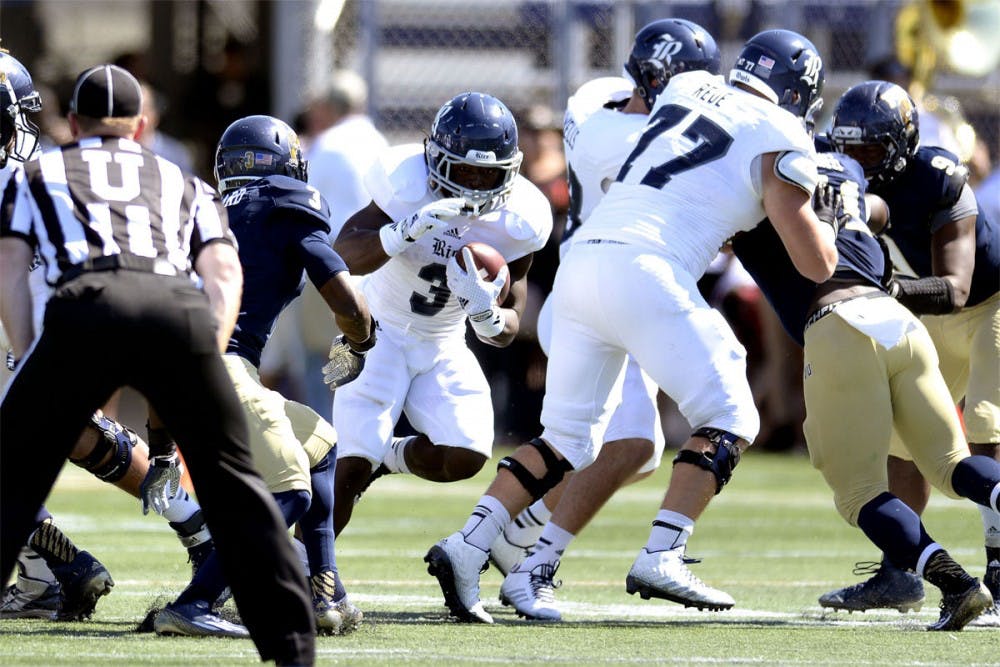 
Sophomore running back Jowan Davis cuts upfield during a 31-17 victory against Florida International University on Saturday, Nov. 1. Davis rushed for 55 yards and a touchdown on the day. Rice has won five straight games and looks to become bowl eligible against UTSA.

The Rice University football team defeated Florida International University 31-17 on Saturday, Nov. 1, extendeding their winning streak to five games and bringing the team to 5-3 overall and 3-1 in Conference USA.

After the Owls defense recovered an early fumble from FIU, sophomore running back Jowan Davis ran 19 yards for a touchdown 33 seconds into the first quarter. Rice increased the lead to 17 after a career-long 40-yard field goal from junior James Farrimond and a 63-yard touchdown pass from junior quarterback Driphus Jackson to senior wide receiver Jordan Taylor.

FIU then scored 14 unanswered points through the end of the first quarter and into the second quarter. Jackson retaliated with a 69-yard touchdown pass to true freshman James Mayden, and FIU answered with a field goal, closing out the half at 24-17. FIU was held scoreless in the second half, and junior Luke Turner scored the last touchdown of the game in the fourth quarter to bring the final score to 31-17.

Jackson led the Rice offense in both passing and rushing, throwing for 230 yards and rushing for 66. Taylor led the team in receiving, catching six passes for 115 yards and a touchdown.

Senior defensive end Zach Patt had a career day en route to earning his first conference defensive player of the week title after recording five sacks and forcing three fumbles. Patt said he was proud of the award and attributed it to the defense as a whole.

“Being defensive player of the week is really a good thing for me because it’s the first time that I’ve done this,” Patt said. “That’s just really a testament to the [defensive line], our staff, the coaches and the unit as a core, rushing together, playing as a team and just having fun.”

According to Bailiff, the seniors played well and led the team effectively. Bailiff also said it is important to acknowledge senior defensive back Bryce Callahan for his ability to lock down opposing receivers.

“I thought our coaches at halftime really made some nice judgements, but also I more importantly thought our seniors just came out with more of a passion [and] played with a chip on their shoulders,” Bailiff said. “Bryce Callahan, our cornerback, [is] very talented. You’re not seeing his name a whole lot because he’s not getting a lot of activity ... He had a stellar game.”

Junior defensive end Brian Nordstrom said he was happy with the team’s defensive performance but acknowledged the need for improvement.

“I’m really happy with how the defense played in the second half of the game,” Nordstrom said. “But at the same time, we’re not satisfied. We still have the goals of winning conference and getting to a bowl game that we need to accomplish.”

Jackson said he liked how the offense played to start the game but said they could have performed better in the second half.

“As far as offense goes, I feel we played well in the first half,” Jackson said. “I feel like we have to play better in the second half ... I feel like we are making great strides. We are throwing the ball a lot better, even though the completion percentage is not where I would like it to be. We are actually putting points on the board in the air. That’s balancing out our ground attack. It’s going to get better going forward.”

Jackson also said playing high-ranked schools at the beginning of the year helped prepare the team to face off against conference competition.

“It takes a lot of pressure off, to be honest,” Jackson said. “Those big games [against Notre Dame and A&M] end up preparing you for the pressure of conference ... [We] want to be undefeated, but [our] goal is to be conference champions. Even though we dropped first conference game to Old Dominion, I felt like we played well in that game. We just came up short ... We can match up with the best and biggest.”

Junior all-conference defensive tackle Christian Covington will be out for around two weeks with a lower leg injury from Saturday’s game. Coach Bailiff said the team will miss Covington’s presence but they have enough depth to recover quickly.

“Dylan Klare is playing exceptionally,” Bailiff said. “Ross Winship has stepped up ... We’ve got good depth there in the middle of the defensive line. They’re making plays. Will we miss him? Absolutely, he’s a great player. Coach [Jim] Wacker, when I played for him, used to tell us ‘you don’t win a championship with a healthy club.’ People have to step up and I expect those guys behind him to.”

Rice is looking to extend their win streak to six games as they host the University of Texas, San Antonio (2-6, 1-3 C-USA) on Saturday, Nov. 8. Bailiff said the return of their senior starting quarterback Tucker Carter will make the game more challenging.

“They have their quarterback back; you know they’re going to come in here excited,” Bailiff said. “They still have a chance to go to a bowl game ... We’ll have a great week of practice [and we] look forward to his homecoming game.”

The game against UTSA is Rice’s homecoming game and will kick off at 11 a.m. at Rice Stadium.