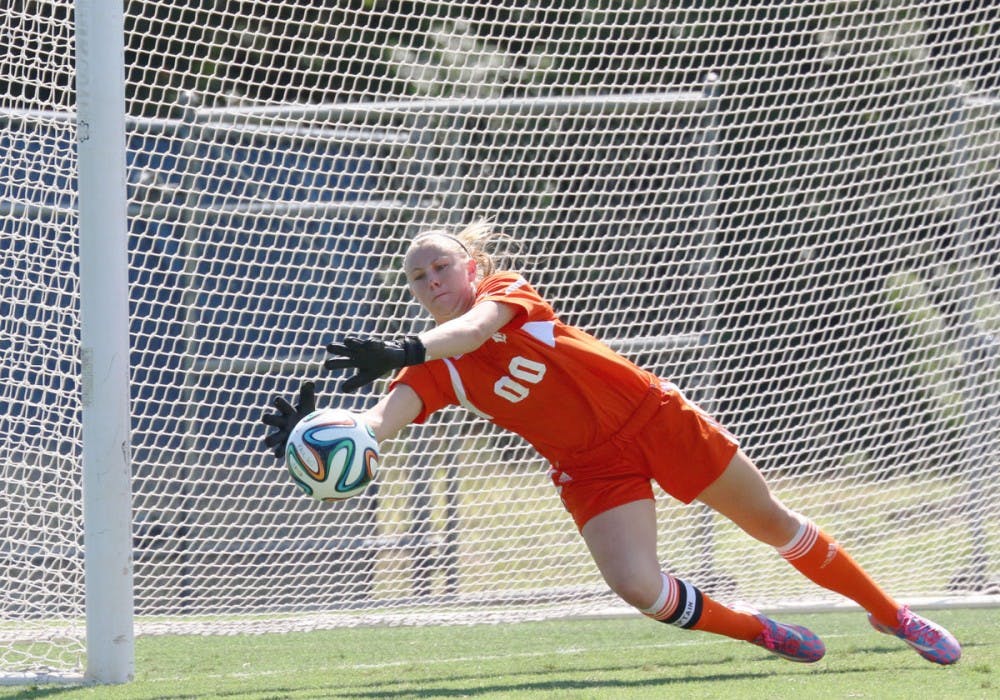 
Senior goal keeper Amy Czyz makes a save during the game at Florida Atlantic University. Though FAU outshot Rice 11-4 in the second half, Czyz recorded four saves, securing the 3-2 win.

The Rice University soccer team traveled to South Florida this past weekend and split two games against Conference USA opponents. The first weekend game featured a 2-1 loss to Florida International University, followed by a 3-2 victory against Florida Atlantic University. Rice is 8-3-3 on the season with a 4-2-1 C-USA record.

The Panthers held Rice scoreless for nearly the entire match, and scored in the 55th minute, giving them a 1-0 advantage midway through the second half. In the 89th minute, however, Rice senior forward Lauren Hughes scored the tying goal with 43 seconds on the clock remaining to send the teams into overtime. Just seven minutes into overtime, FIU found the back of the net to clinch the win.

On Sunday afternoon, Rice beat FAU 3-2. By the 16th minute of play, Rice had already taken a 3-0 advantage from goals by junior midfielder Danielle Spriggs, Hughes and freshman midfielder Samantha Chaiken. However, FAU continued to chip away at the Rice lead by scoring two goals by the 60th minute. Rice was outshot 11-4 in the second half but found a way to hang on and secure the 3-2 victory.

Head Coach Nicky Adams said she was disappointed with the team’s performance in Friday night’s loss against FIU, but satisfied with the win against FAU.

“Our Friday night performance was the first game [I felt] our entire team did not play well,” Adams said. “We couldn’t get over them, couldn’t play our style of game and struggled as a unit. However, I’m proud of our team for rebounding well with three goals on Sunday.”

According to Adams, the upcoming home games are critical to the team’s success, particularly with only three regular-season games remaining.

“We now have two home games against [Old Dominion University] and [the University of North Carolina, Charlotte], which are our last two home games,” Adams said. “We’ll be ready to go … and still have nine points to earn to close out our C-USA season.”

Hughes said the lower level of play the Owls have had over the past three matches has concerned her, but she is happy to see her team return to its winning ways after the FAU game.

“We definitely had a bit of a slump where we didn’t play Rice soccer and allowed the other teams to dictate the way we were playing,” Hughes said. “I think our team’s ability to bounce back from the slump shows the grit we have … and I’m extremely excited that we are back to playing our game.”

Spriggs said the game against FAU helped the team return to form and focus on finishing the season strong.

“At FAU, we got back to what makes us a great team, and hopefully we carry that with us the rest of the season,” Spriggs said. “We have three games left in Conference, and winning all three of those is really important. We’re excited to go [out and] take care of business.”

The Owls return home this weekend for the final two home games of the season. The Owls will compete against Old Dominion University Friday at 7 p.m for Senior Night and the University of North Carolina, Charlotte Sunday at noon. With three games left in Conference play, the Owls are tied for second place and are looking to catch up to the University of North Texas, who currently leads the conference by one game.