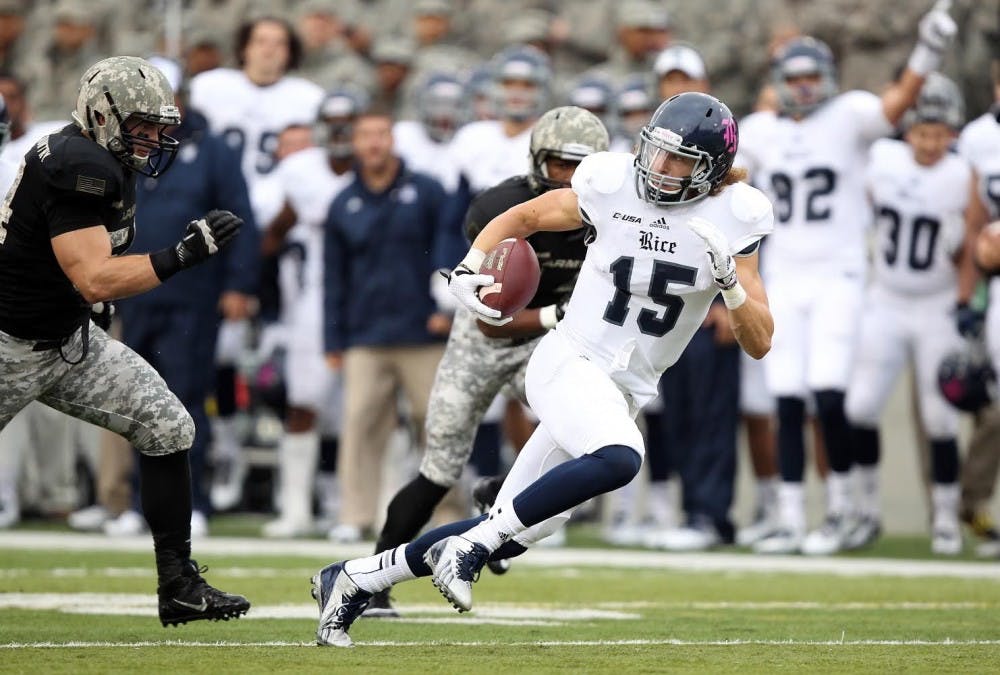 
Senior wide receiver Jordan Taylor runs past the Army defense during a 41-21 victory for the Owls.  Taylor caught three passes for 72 yards and a touchdown in the game.

Coming off a bye week and riding a three-game winning streak, the Rice University football team (3-3, 1-1 C-USA) returns home this weekend to face the University of North Texas.

UNT (2-5, 0-3 C-USA) is currently riding a three-game losing streak, losing by an average of 23 points to Indiana University, the University of Alabama, Birmingham and the University of Southern Mississippi, which Rice defeated 41-23 on Sept. 27.

Junior quarterback Driphus Jackson has shown improvement over the past three games as well, throwing for 635 yards, seven touchdowns and two interceptions. The increased offensive productivity can be attributed in part to the return of all-conference senior wide receiver Jordan Taylor, who, after not playing in the first three games, has caught eight passes for 175 yards and two touchdowns over the last two games.

Rice’s rushing offense has continued to produce yardage and points through sophomore running backs Jowan Davis and Darik Dillard, who have rushed for 924 yards and eight touchdowns on the year combined.

The UNT game will be the third Conference USA matchup of the year for the Owls. Rice began the conference schedule by losing to Old Dominion University 45-42, then defeating Southern Miss in Mississippi. A victory against UNT would help the Owls in their attempt to repeat last season’s conference championship, as the Owls are currently tied for second place in the C-USA West Division with the University of Texas, El Paso.