'Bob' makes a name for himself on field 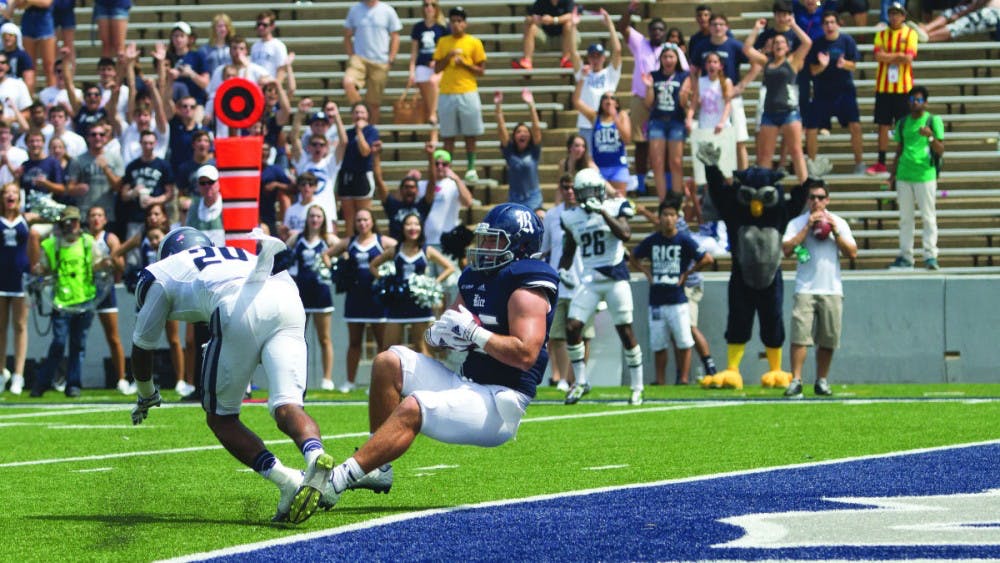 
Junior running back Luke Turner dives into the endzone for a score agaisnt Old Dominion University. Turner has 145 yards and three touchdowns this season.

Luke Turner is the reigning Conference USA Championship Most Valuable Player and is currently in his third year of eligibility for Rice University football. Despite being listed as a running back, Turner does not exclusively play one position.

Although Turner played quarterback in high school, he has played numerous positions at Rice, filling in gaps on both sides of the ball. He has scored touchdowns as a quarterback, receiver and running back in his time on the team. Turner has also taken a few punts and returned kicks.

According to Turner, it is difficult to perform in a number of different roles, but he welcomes the challenge with open arms.

Turner also currently plays quarterback in the “Wild Owl” formation, an offensive formation in which a running back lines up in the quarterback slot. Turner first earned his opportunity to run the formation last season after senior running back Turner Petersen sustained a knee injury against Tulane University last November.

Turner said being the featured quarterback in the Wild Owl is due to his high school football experience as quarterback.

“I played quarterback in high school, and Turner [Petersen got] a little banged up at the beginning of fall,” Turner said. “[The coaches] said, ‘Hey this kid played quarterback, let’s see what he can do.’ They just kind of gave it to me after that and I’ve been doing it ever since.”

Turner has been nicknamed ‘Bob’ by his teammates and coaches, which he attributes to the confusion that came from having two other players named Luke Wilson and Turner Peterson on the team. Turner said Wilson, who is currently a tight end for the Seattle Seahawks, was tired of the confusion and told everybody to start calling him Bob instead.

“[We] had Luke [Wilson] and Turner [Petersen],” Turner said. “My name is Luke Turner, so [there was] a little confusion out at practice every day. It went until about three weeks into fall camp my freshman year … One day, Luke Wilson just stopped practice and said ‘Everybody, he’s Bob from now on.’ It was just supposed to be a joke, initially, but it stuck.”