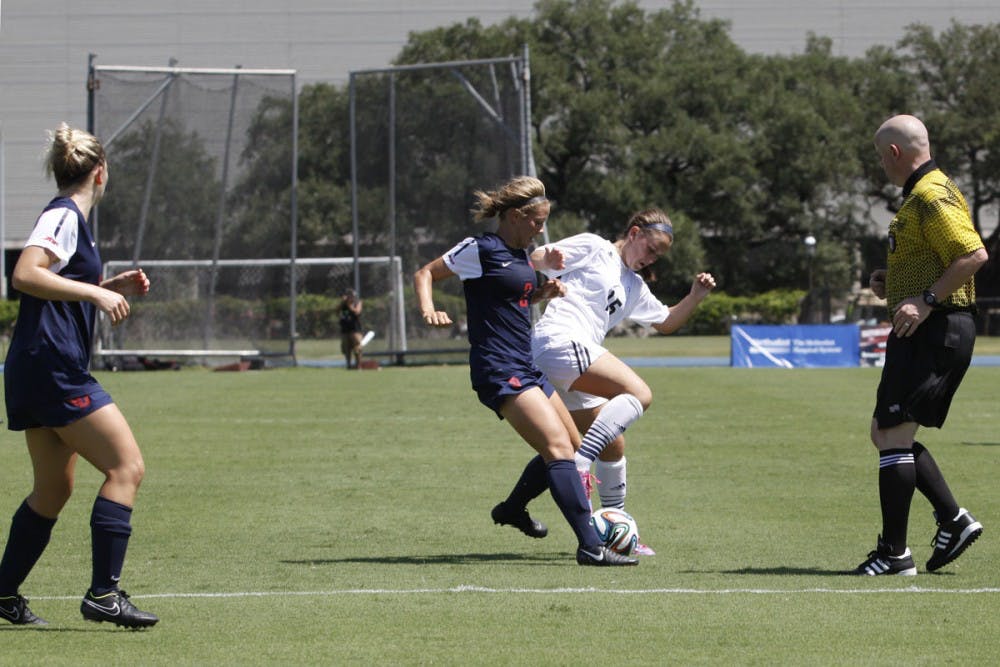 
Freshman midfielder Alex Lowes fights for the ball against the University of Dayton on Sunday, Aug. 24. The match finished in a 2-2 draw, giving the Owls a record of 0-1-1.

The Rice University women’s soccer team kicked off their 2014 season with two overtime matches this past week. The 2014 team has many key returning players including senior goalkeeper Amy Czyz and juniors Holly Hargreaves and Lauren Hughes, who led last year’s team in scoring with nine goals each. Other returning players for the Owls are midfielders senior Quinny Truong and junior Danielle Spriggs.

The first official match of the season was an away game against Baylor University on Friday, Aug. 22 in Waco, Texas. The Owls were defeated 1-0 in an overtime game that remained deadlocked for over 95 minutes of play. The Owls then played on Sunday, Aug. 24, in the home opener against the Dayton Flyers. After 110 minutes, the two teams finished in a 2-2 tie. The Owls now have a record this season of 0-1-1.

Despite the 1-0 loss to Baylor, Head Coach Nicky Adams said she was proud of the effort her team gave against the Bears.

“You can’t fault this team at all,” Adams said. “Our effort was unbelievable all 90 minutes plus the overtime period. I thought our girls did an unbelievable job. This team never stopped fighting, and it makes me so excited for the future of this team.”

The Owls returned to Holloway field to face the Dayton Flyers on Sunday, Aug. 24. The Owls scored the opening goal of the match in the 10th minute. Danielle Spriggs found the back of the net off a deflection from the goalkeeper for her first career goal. Shortly after, in the 22nd minute, Dayton tied it up on a bending shot that passed Czyz. Eight minutes later, the Flyers would score again off a penalty kick and take a 2-1 lead into halftime.

The Owls came out from the locker room looking to combat the deficit. The aggressiveness paid off as forward Lauren Hughes scored an equalizer in the 56th minute of play. Sophomore defender Jenny Fichera produced a cross that hit off the far post. Hargreaves controlled the deflection and found Lo for the score, giving Hargreaves her second assist of the game. For the next 45 minutes of the game, no goals were scored on either side and the game ended in a 2-2 tie. Rice produced 25 shots in the game and 13 corners. Rice goalkeeper Czyz finished the game with nine saves for the Owls.

Coach Adams said she was pleased with her team’s play this past weekend, considering the difficulty of the early-season schedule.

“We opened up with one of the toughest schedules, having two NCAA tournament teams back to back,” Adams said. “But what I can say about this group is that they never stop battling.”

Adams also noted how much passion her two forwards, Hughes and Hargreaves, have for the game of soccer and their impact on the team.

“They really love the game of soccer and you can tell in the way they play,” Adams said.” They are doing a great job creating chances for us, and we’re going to get goals from them for sure.

Hargreaves said she is proud of the way her team has come out early in the season and shown so much effort.

“This whole weekend we really fought,” Hargreaves said. “Everybody is trying as hard as they can and putting everything out there. I think it’s absolutely incredible.”