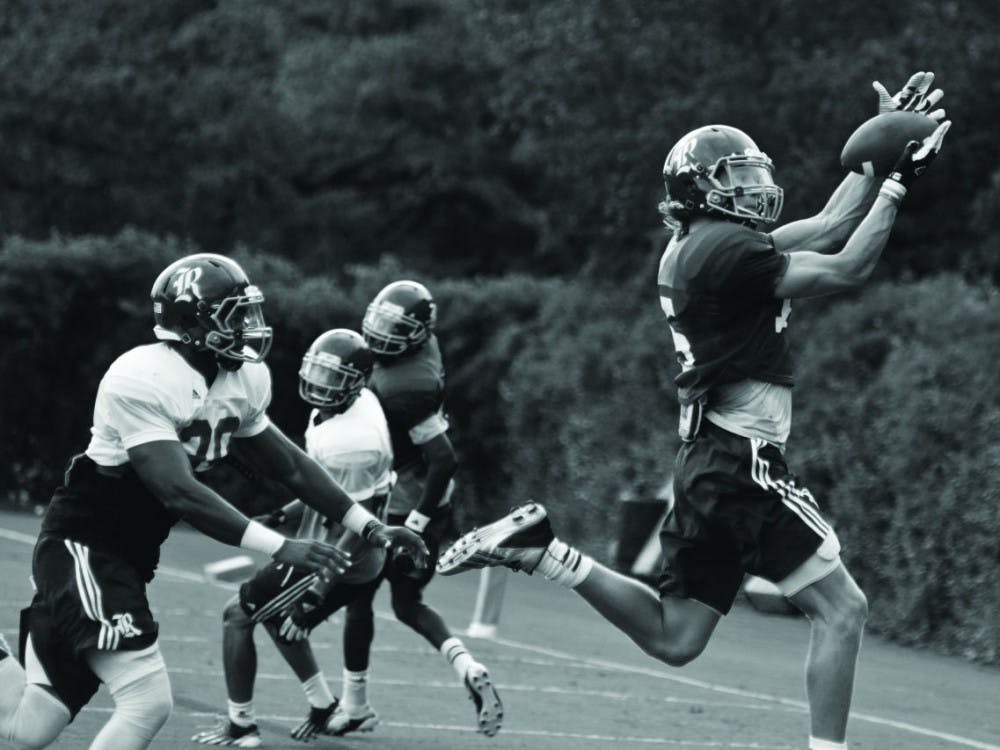 
Senior wide receiver Jordan Taylor hauls in a deep pass during the Owl’s fall training camp. Taylor led all receivers with 55 catches for 848 yards last season. The Owls look to record their fourth ten-win season in school history and reach their third consecutive bowl game in the 2014 season.

When the Rice University football team takes the field against the 17th-ranked University of Notre Dame this Saturday, Aug. 30, they will be the defending conference champions for the first time since 1956. Following their third ten-win season in school history, the Owls will strive for their third consecutive bowl game and try to repeat as conference champions, something that has never been achieved in school history.

Despite a Liberty Bowl loss to the Southeastern Conference’s Mississippi State University, the 2013 season was successful for Rice football. After going 9-3 in the regular season, including a 7-1 record against conference opponents, Rice culminated their season with a 41-24 victory over Marshall University in the Conference USA championship game at Rice Stadium.

Rice’s road to repeating as conference champions will be impacted by the loss of several key players. Notably, four-year starting quarterback Taylor McHargue and former C-USA Defensive Player of the Year and current Kansas City Chief Phillip Gaines were lost to graduation, part of a class that had a 100% graduation rate.

Despite the losses, Rice returns a team that looks to defend and contend for the conference title. Although the Owls lost Gaines, defensive coordinator Chris Thurmond stressed the importance of reloading the defense and establishing new leadership.

“As things change, people have to step up, and they have to assume responsibility and leadership,” Thurmond said. “[Gaines] was a great player and a third round draft choice. Those guys are difficult to replace, but that’s just something that we’re going to keep working on, and we’ll find somebody who can fill that role.”

Additionally, Thurmond said redshirt senior cornerback Bryce Callahan, who has 11 interceptions in his Rice career, is ready to step up to the challenge. He also said finding a second cornerback to compliment Callahan will be key for the defense.

“Bryce is a great player,” Thurmond said. “When you’ve got one [cornerback] with experience like Bryce, we anticipate them trying to throw away from him in the early part of the year, so what we’ve got to do is show that we can hold up on the other side, and we will.”

On defense, which ranked 11th in the country on third down percentage last season, a key member of the unit is redshirt junior defensive tackle Christian Covington, a third-team preseason All American. The fifth-best defensive tackle in the country according to cbssports.com, Covington led the Owls with 11.5 tackles for loss last season, including four sacks. According to Thurmond, Covington has natural ability that will help the Owls tremendously this season.

“[Covington] is just a very, very gifted player,” Thurmond said. “He works really hard, he’s got the size and strength to play the run, he’s got the agility and quickness that he can be a good pass rusher too. He’s just a complete defensive lineman—we’re looking for big things out of him.”

The Owls will be losing longtime quarterback Taylor McHargue, who amassed 7,523 total yards of total offense and 60 touchdowns during his four years as quarterback of the Owls. The team will now look to redshirt junior replacement Driphus Jackson, a former three-star recruit that led the Owls to a 33-14 victory in the 2012 Armed Forces Bowl over the Air Force Academy.

Despite specializing on the defensive side of the ball, Thurmond noted the already commanding presence and leadership that Jackson has on the team.

“[Driphus] is just a phenomenal leader, a great kid, and just does everything,” Thurmond said. “He has every intangible, works unbelievably hard, and he’s a great guy preparation-wise. He’s just a wonderful kid on and off the field.”

“When you’re playing a program like Notre Dame, you know that they’re going to have an inordinate amount of good players, so we don’t ever overly prepare just individual players,” Thurmond said. “We don’t anticipate a huge drop-off or any drop-off at all, because Notre Dame is just a talented, deep program.”

Rice begins the 2014 season with two ranked opponents, facing the Associated Press No. 17 and 21 Notre Dame and Texas A&M University in consecutive games. The Owls then return home on Sept. 20 to face Old Dominion University in the first conference matchup of the season.