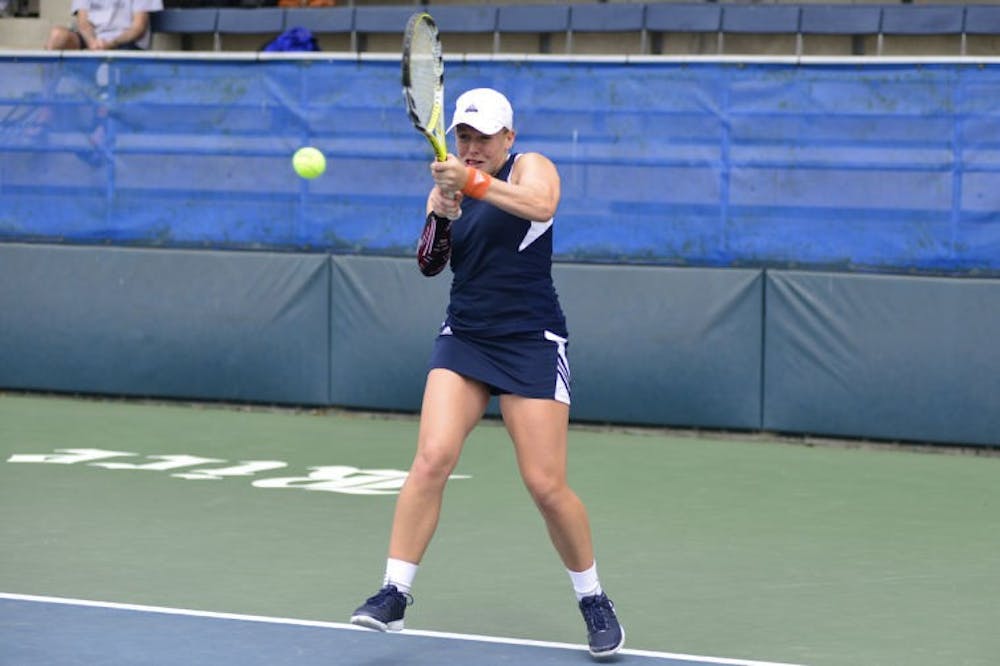 On Saturday, April 5, the Rice University women’s tennis team beat DePaul University 6-1 at Jake Hess Tennis Stadium. This recent victory is the latest in a seven-game winning streak for the Owls. Rice’s record is now 13-5.

On Saturday, April 5, the Rice University women’s tennis team beat DePaul University 6-1 at Jake Hess Tennis Stadium. This recent victory is the latest in a seven-game winning streak for the Owls. Rice’s record is now 13-5.

In addition to the winning streak, senior Dominque Harmath was named C-USA Women’s Tennis Athlete of the week last week.

Harmath said she was honored to be given validation for all her hard work.

“I was honored to be the athlete of the week,” Harmath said. “It’s a great feeling to see hard work pay off in matches.”

While Harmath said the team is pleased with the most recent triumph over DePaul, success against Yale University earlier this month was key to the team’s momentum. Rice beat Yale 4-3 in a close match that nearly ended the winning streak.

Harmath said the team was able to beat Yale through tenacity and the ability to execute in doubles matches.

“Our victory over Yale was an extremely hard-fought one,” Harmath said. “[The] team did a fantastic job pulling out the doubles point, and it gave us the edge to later take the win.”

Baylor and UTSA are the final matches of the season. On April 17, the C-USA Tennis Championships begin in Norfolk, Va. With the season drawing to a close, Rice is looking to finish on a strong note and carry its momentum into the conference tournament.

Harmath said their success has been achieved through the team’s focus on doubles.

“We have put a lot of emphasis on doubles, as capturing the doubles point in dual matches has proven to be crucial in big matches,” Harmath said.

Harmath also said the team has no intention of resting on its successes. She said they are happy for the winning streak, but are mostly focusing on the pivotal matches in the near future.

“Winning feels great, but we have to keep our focus, as we have some very important matches up ahead,” Harmath said.

According to Harmath, the team is anxious to face Baylor once more. She said the match this Wednesday will be a hard-fought battle.

“Baylor is a strong team, and we are excited to take them on again this season,” Harmath said. “It’s going to be an intense matchup on Wednesday.”