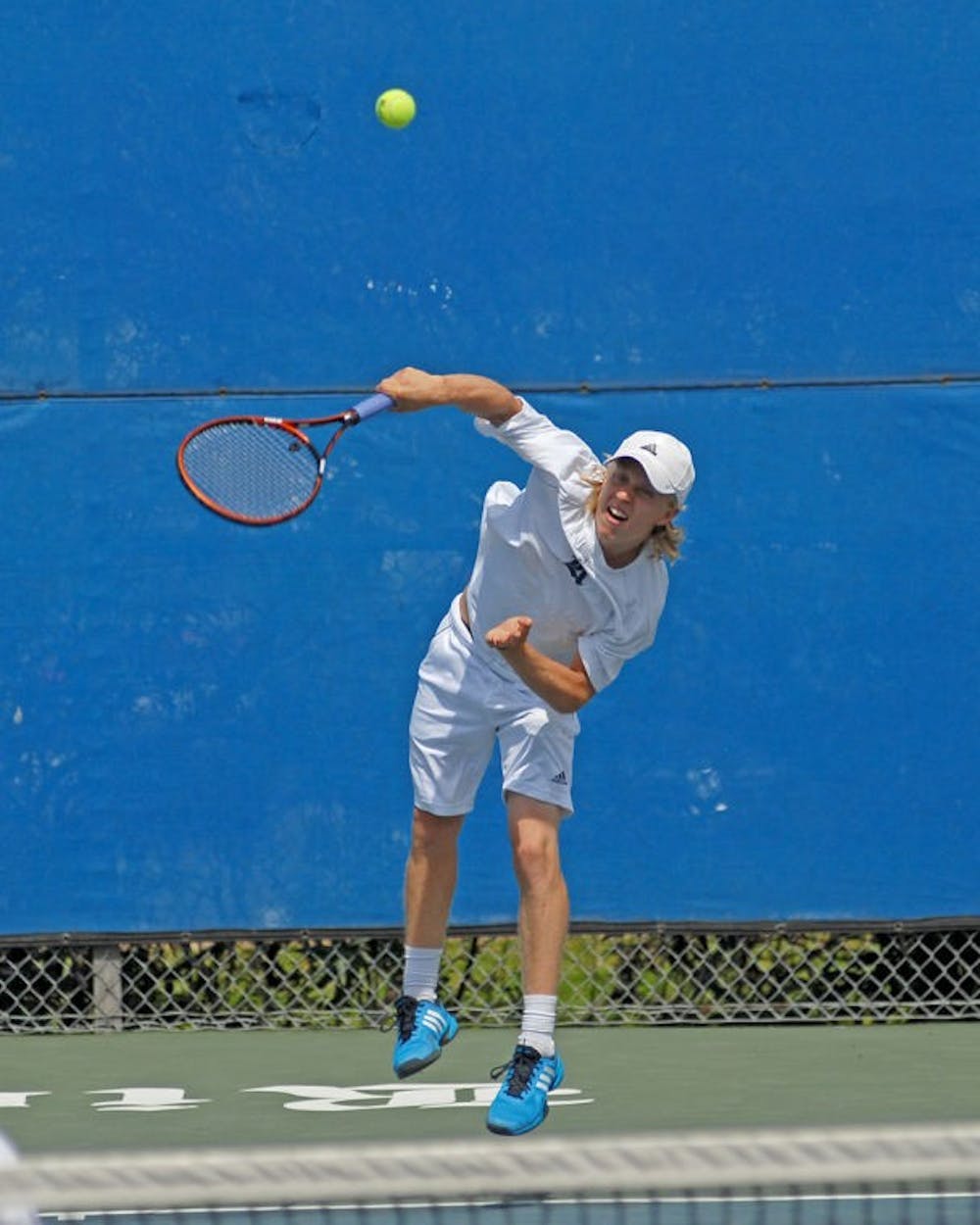 
Sophomore Adam Gustafsson delivers a serve at the Conference USA Championship over the weekend. The Owls season ended with a 4-0 loss to the University of Tulsa in the semifinals.

The Rice University men’s tennis team traveled to Tulsa, Okla. this weekend for the Conference USA Men’s Tennis Championship. The fifth-seeded Owls defeated fourth-seed Middle Tennessee State University 4-1 in the first round before falling to top-seeded University of Tulsa 4-0 in the semifinals.

The Rice University men’s tennis team traveled to Tulsa, Okla. this weekend for the Conference USA Men’s Tennis Championship. The fifth-seeded Owls defeated fourth-seed Middle Tennessee State University 4-1 in the first round before falling to top-seeded University of Tulsa 4-0 in the semifinals.

The Owls (9-12) faced the MTSU Blue Raiders (10-13) on Friday, April 18. Rice took an early 1-0 lead in the doubles point with wins on two of the three courts, giving them some leverage going into singles. That momentum, however, would not carry over into the Owls’ match against Tulsa.

Head Coach Efe Ustundag said, despite the loss against Tulsa, he was proud of the way his team played in their first-round victory over MTSU.

“I really thought we played with great intensity and energy right off the bat,”    Ustundag said. “Zach Yablon and Gustavo Gonzalez came out on fire to win 8-2, and Srikar Alla and David Warren were right behind them.”

This intensity was demonstrated in the Owls’ three singles wins. Middle Tennessee junior Yannick Born defeated freshman Zach Yablon to tie the match 1-1, but Rice freshman David Warren quickly answered with a straight set win, putting the Owls back on top. Rice Freshman Max Andrews overcame a first-set tiebreak and followed with a 6-2 final set to secure the Owls’ third point. Sophomore Adam Gustafsson clinched the win for Rice with a 6-1 third-set win after fighting off five match points to force a tiebreaker in the second set.

According to Ustundag, the Owls’ endurance and mental fortitude allowed the team to beat MTSU.

“We had a few slow starts in singles, but I thought we really wore them down mentally, and that showed in the later sets,” Ustundag said. “If you look at the scores in the matches, there were battles early, but our guys really took charge down the stretch.”

With their win on Friday, Rice advanced to the tournament semifinals, where they would fall to Tulsa 0-4. Tulsa started the match by grabbing the doubles point and would not relinquish the lead. Tulsa won the clinching point with straight-set wins against sophomore Adam Gustafsson, sophomore Gustavo Gonzalez and freshman Henrik Munch.

According to Ustundag, the Owls had a rough start when Tulsa took the doubles point and Rice was unable to regain momentum.

“We had our chances early in doubles, but we didn’t take advantage of some of the opportunities Tulsa gave us,” Ustundag said. “We had some early chances at breaks but could not convert. Tulsa is a very deep and talented team, and you can’t afford to not take advantage of the breaks that come your way.”