Football back in action in annual Blue-Gray game 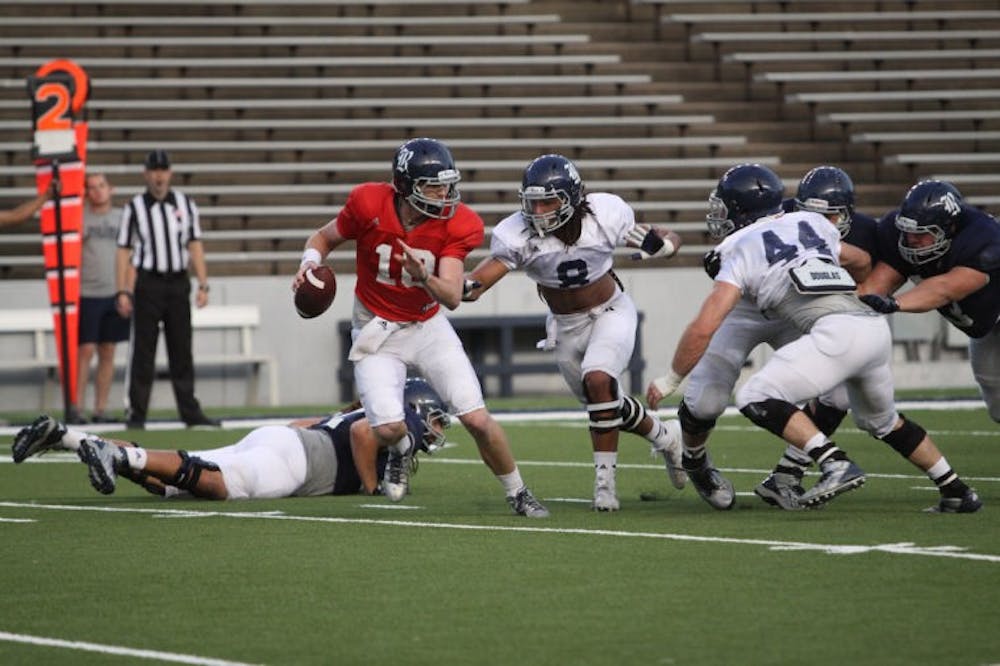 The Rice University football team participated in the annual Blue-Gray game in which both the Owls offense and defense took the field in an exhibition-style matchup as spring drills concluded for this 2013-14 academic year.

The Rice University football team participated in the annual Blue-Gray game in which both the Owls offense and defense took the field in an exhibition-style matchup as spring drills concluded for this 2013-14 academic year. On Friday, April 11, the game took place between the Blue (Rice offense) and the Gray (Rice defense). In this final conclusion of spring practices, the Gray proved triumphant over the Blue with a final score of 32-29. In a fashion contrary to an actual football game, points were allotted to each side not only for team accomplishments and scores, but also for individual accomplishments such as interceptions and sacks. Guest coaches for the event, hosted at Rice Stadium, included Houston Astros President Reid Ryan, Rice Professor Dr. Rick Schell, KHOU-TV newscaster Chita Johnson and many others.

Head Coach David Bailiff commented on how the guest coaches he selected felt as they watched the action from the sidelines and communicated with the players on the field.

“This [was] a unique way to get people involved in our program. It’s always fun to hear the reactions of people when we offer them the chance to come down and put on a headset,” Bailiff said. “They almost always are pretty nervous before we start, but they get the hang of it pretty quickly and have a great time.”

Once the action began, the Gray squad got out to a hot start. The Gray team had an early 17-1 lead by taking advantage of the scoring system implemented for this particular contest. A 40-yard interception return by the duo of seniors Malcolm Hill and Gabe Baker was a highlight-reel play as a lateral was pitched to Baker, who went on to carry the ball into the end zone.

On the opposite side of the ball, a big spark for the Blue was redshirt freshman Temi Alaka, who had four receptions for 134 yards and two touchdowns. A 34-yard strike from redshirt junior Guy Billups in the second quarter was followed up by a 57-yard pass from fellow freshman Nate German that put the Blue on top 29-28. Two sacks for the Gray on the following position awarded the team an additional four points and propelled the team to a 32-29 victory. German threw for 128 yards and two scores, while junior quarterback Driphus Jackson completed 8-10 yards for 95 yards. Wide receivers Dennis Parks and Zach Wright each had three receptions for a combined total of 99 yards.

Bailiff said he was pleased with the performance his team put out on the field in this friendly scrimmage.

“I think we played with a lot of effort, a lot of enthusiasm,” Bailiff said. “It’s a game where you want to get better as a football team [in the long run] … so we played a lot of our younger guys who we will rely on next season.”

According to Bailiff, both the quarterback play and the defensive play for the Owls was efficient and competitive.

“I thought all three quarterbacks threw well at times, and [I] was just as proud of our defense, who I feel chased the ball around really well,” Bailiff said. “I thought we tackled well as a team for the last day of spring.”

Bailiff said he is excited to move on to two-a-days and to the opening game in South Bend, Ind. to face the national powerhouse, the Fighting Irish from Notre Dame.