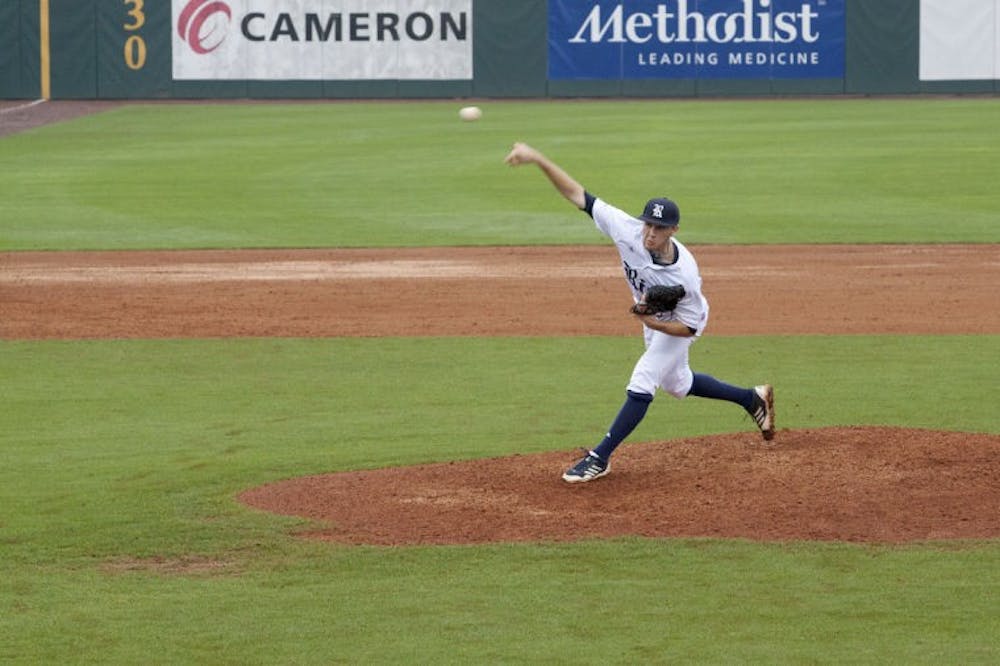 
Sophomore Matt Ditman delivers a pitch Sunday against East Carolina University.  The Owls fell 2-1 on Sunday and dropped the three-game series two games to one.

The Rice University baseball team hosted the Eastern Carolina University Pirates this past weekend in a three-game series between the top two teams in Conference USA.

The Rice University baseball team hosted the Eastern Carolina University Pirates this past weekend in a three-game series between the top two teams in Conference USA. For the second straight weekend, the Owls won only one game out of three, giving ECU the series victory for the first time since 2006. The Owls are now 22-12 on the season (10-5 in conference play), while the Pirates improved to 19-13 overall (8-4 in conference play).

On Friday night, two of the premier junior pitchers in the country took the mound as ECU’s Jeff Hoffman and Rice ace Zech Lemond squared off at Reckling Park. The game remained scoreless through four innings until Rice strung together three consecutive singles to take a 1-0 lead in the bottom of the fifth.

The Pirates scored a run in the following inning to tie the ballgame at one run each. The score would remain that way until the ninth inning. The Owls walked two batters and allowed two singles in the ninth, which gave ECU the 3-1 lead. The Owls led the inning off with back-to-back singles. With runners on second and third and one out, the Owls only managed to score one of the base runners and lost by a final score of 3-2.

Fox would proceed to throw 7.1 innings of shutout baseball to ensure Rice’s victory. Rice went on to score three more runs in the bottom of the eighth, winning with a final score of 8-0. Fox improved to 7-0 on the year and allows an average of less than one run per every nine innings he pitches.

In the final and deciding game of the weekend series, the Owls had senior Chase McDowell on the mound in what would be a rainy contest throughout. The early 10:30 a.m. start time did not prevent the inclement weather as rain poured throughout the first five innings of the ballgame. The Owls managed to get on the board first as senior Michael Aquino hit a double to deep left, which was followed up by a Keenan Cook triple to take a 1-0 lead.

After a rain delay halted play for approximately one hour and 15 minutes, the Owls went back to work, holding the ECU Pirates scoreless until the ninth inning. With two outs and nobody on base for ECU, Rice needed one more out to secure the win but were unable to do so. An ECU rally would bring in two runs in the ninth inning to take a 2-1 lead headed into the bottom half of the inning. Despite Rice’s attempt to rally after the leadoff hitter reached base, a ball hit down the line was corralled by ECU and turned into a double-play to finish the game.

Hoelscher said despite the disappointing losses as of late, the Owls must regain their drive to get the job done and continue to win ballgames.

“We don’t have a choice but to respond with some energy, tenacity and focus,” Hoelscher said. “We need to start realizing that we must win and get the job done for each other.”

In his final season with the Owls, Hoelscher said the number one goal is to win another Conference USA title. He said he wants his team to focus and get the team back on track.

“Right now the number one goal is to win [Conference USA],” Hoelscher said. “We have to go into every game from here on out expecting to win.”

Fox said he believes that despite the recent losses, his team has a great chance of winning this upcoming weekend against Tulane University.

“Hopefully we can bring our A game when headed out on the road to [play] an overall solid team,” Fox said. “As long as our bats are there and our pitchers are filling up the zone, we have a good chance of getting some wins.”

The Owls will face conference-foe Tulane University this upcoming weekend in New Orleans, La. Tulane is 14-16 overall (6-8 in conference play). First pitch is scheduled for Friday, April 11 at 6:30 p.m.