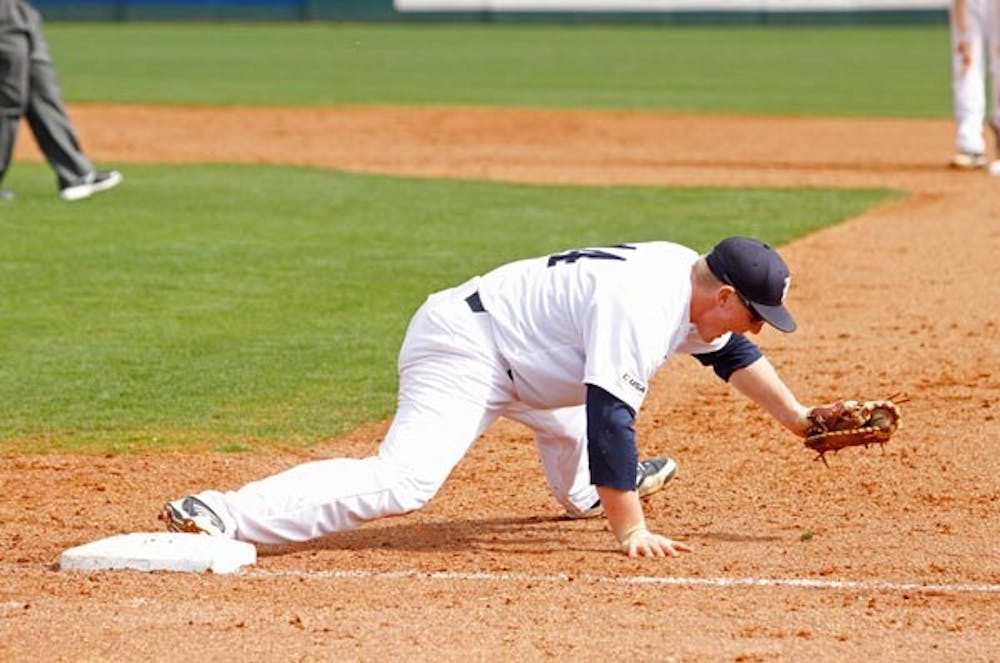 
Junior Skyler Ewing stretches to record an out from first base. Rice University baseball opened their conference play on Friday, March 7 against Old Dominion University. The team defeated the Monarchs in the first match and gained another victory in the series on March 8.

The Rice University baseball team opened conference play on Friday, March 7 against Old Dominion University in the first of a three-game series. In the first meeting, the Owls pitching staff performed well in a 4-1 win.

The Rice University baseball team opened conference play on Friday, March 7 against Old Dominion University in the first of a three-game series. In the first meeting, the Owls pitching staff performed well in a 4-1 win. Junior pitcher Zech Lemond started the game instead of coming in as a closer, recording 10 strikeouts in 6.2 innings and allowing only one unearned run. Sophomore shortstop Leon Byrd hit a bases-loaded double that brought in three runs, giving the Owls a 3-0 lead in the first inning that they would not relinquish.

Rice’s lone two runs in regulation came in the fourth inning when senior left fielder Michael Aquino recorded an RBI on a double, while junior catcher John Clay Reeves brought in the second run on a sacrifice fly.

After Old Dominion tied the game at 2-2 in the eighth inning, the game remained tied until the bottom of the 17th inning when junior first baseman Skyler Ewing broke the deadlock with a game-winning single to left field that brought home senior second baseman Ford Stainback to give the Owls the victory. The game started at 10 a.m. but didn’t end until 2:53 p.m., making it the longest game thus far in the Owls’ short season.

The second game of the doubleheader ended in 10 innings with Rice suffering a 2-1 defeat. Sophomore pitcher Kevin McCanna pitched 9.1 innings but recorded a loss by allowing two earned runs. The Owls’ lone run came early in the first inning when Aquino singled to right field to bring home Byrd. Rice was held scoreless for the remainder of the game.

With the series win, the Owls are now 10-6 for the season and 2-1 in Conference USA play. The Owls will play Texas A&M University, Corpus Christi at home on Wednesday, March 12, before traveling to play a three-game series this upcoming weekend at Florida International University, a C-USA newcomer this season.