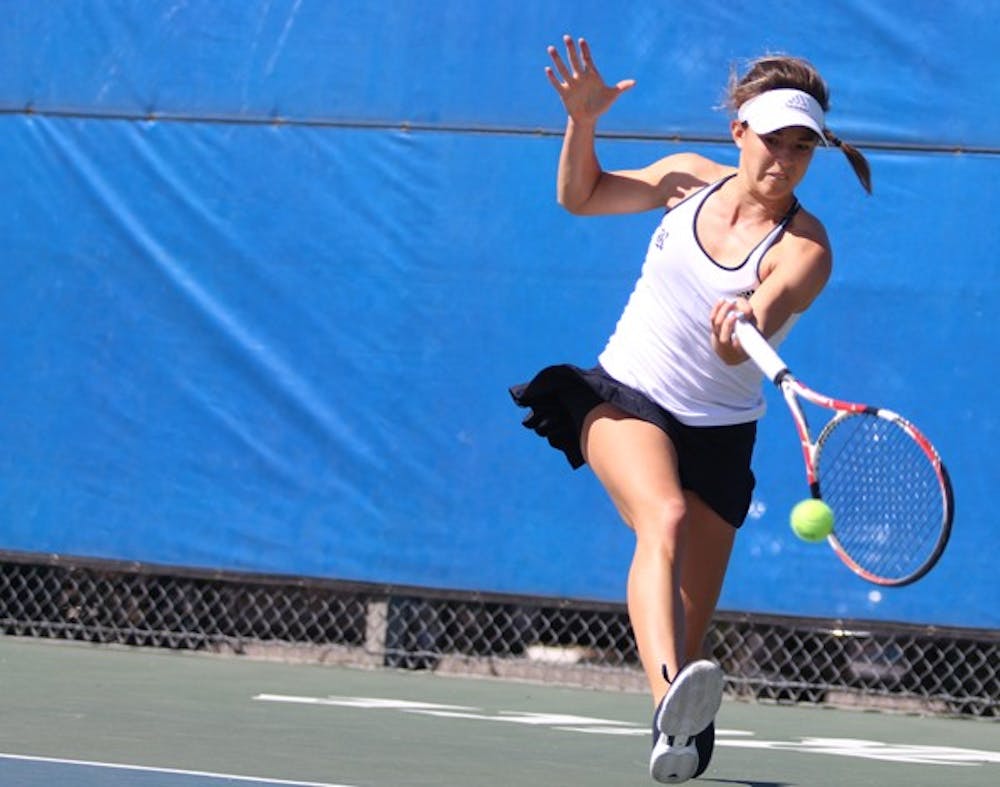 
Senior Dominique Harmath goes for a forehand during her singles match against McNeese State University on Saturday, Feb. 15 at Jake Hess Stadium. With the win, the Owls ended their three-game losing streak to go to 3-3 for the season. Rice heads to the Blue Gray National Tennis Classic, held in Birmingham, Ala. from Friday, Feb. 21 to Sunday, Feb. 23.  After that, the Owls start a four-game home stand against New Mexico State University on March 1.

Head Coach Elizabeth Schmidt said it feels good to win. She also said she was proud of the team’s discipline, control and successful execution.

“It was nice to get back in the win column, but even better than that was the way that we played,” Schmidt said. “I thought we [were] focused. We played with discipline and controlled our emotions well. Those are things we worked on this week. I was pleased to see our players come out today and execute some of the things we had worked on during the week in a competitive environment.”

Schmidt said she felt some relief that the team has been able to improve despite uncontrollable weather issues.

“We’ve had a lot of strange weather this spring and have not been able to practice outside that much,” Schmidt said. “The matches we have played outside have usually had a threat of rain or it’s been cold. It was nice to be back outside in normal Houston weather.”

Senior Dominique Harmath said she looks at the Blue Gray National Tennis Classic and the rest of the season with a positive attitude. She said the players feel they have a lot of potential for success this season due to their diligent work ethic.

“It is only the start of the season, and we have been working extremely hard,” Harmath said. “We believe we can accomplish anything we set our minds to and we will continue to have that mind-set throughout the season.”

Harmath also said the team will work on its consistency in order to add wins.

“Being diligent and making big points through consistency will be our main focus,” Harmath said.

“We know some of the teams we could face, but as we always do, we will put the focus on the next opponent on the schedule,” Schmidt said. “We will get as much information as we can on all the teams that will be there, but in the end, it’s about us working to refine what we do well and working to improve upon our weaknesses.”