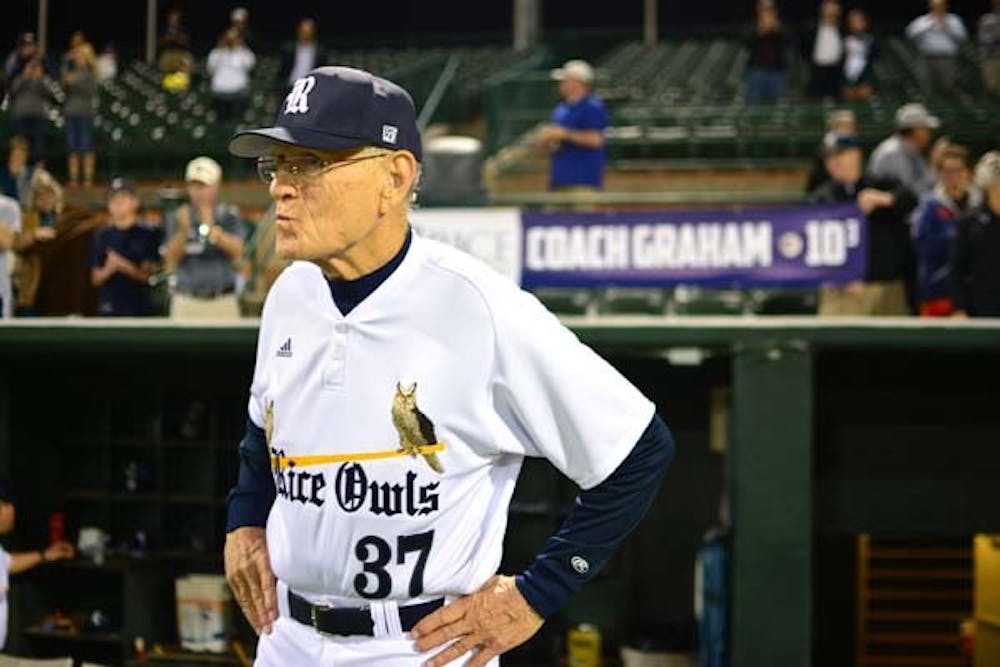 Now beginning his 43rd year as a baseball coach and his 23rd year as Rice’s head coach, Graham is the past, present and future of Rice baseball. There is no doubt he has made a lasting impact on both Rice baseball and Rice University as a whole. Starting in 1992, Graham managed to take a team that had earned seven winning seasons in the past 78 years and turn it into one of the top baseball programs in the country. Since then, Graham has won 18 consecutive conference championships and led the Owls to their first national championship in the history of Rice athletics in 2003.

Last Tuesday, Feb. 18, Graham reached a milestone of 1,000 wins as the Rice head coach, which comes as little surprise considering he has managed 22 consecutive winning seasons.

For Graham, however, the accomplishments come second to the meaning behind what he’s been doing all of these years. After playing major league baseball for 10 years with the Philadelphia Phillies and the New York Mets, he decided to finish his education at the University of Texas, Austin before he became a coach.

Graham said he wanted to become a coach so he could work toward something bigger than himself.

Baseball has played an enormous role in Graham’s life, but it has always been about the bigger picture. When the six foot tall, 148-pound pitcher at Reagan High School (nicknamed “the Reagan thin man”) was injured playing football, Graham said he quit football to ensure he could receive a scholarship to play baseball at the next level.

In describing his philosophy toward baseball and coaching, Graham cited several theories and concepts, such as Occam’s razor, the serenity prayer, Darwin’s theory of evolution and an idea he calls economy in motion, in which the unnecessary is removed and the necessary is reinforced.

In addition, Graham said he likes to think of baseball as a form of artistic expression.

“Athletics is art,” Graham said. “It doesn’t involve what intellectuals perceive as intellectual art, they don’t realize how artistic athletics is. Because it’s about passion, it’s about choreographed moves … you also have a degree of adaption within your moves so that you can adapt to something that happens that isn’t programmed. Only the true artists have that.”

As far as Graham’s future, he will not be leaving Rice anytime soon. Graham extended his contract by five years last year, meaning his coaching career will continue through the 2018 season. Now at age 77, Graham is expected to be coaching the final year of his current contract at age 82.

However, among the many accomplishments of his coaching career, Graham said his greatest regret was starting at Rice so late in his life.

“The most disappointing thing to me was that it took all those years to get here,” Graham said. “I never thought it would have taken 20 years and five national championships in a junior college level to get a Division I job.”

Despite his delayed start, Graham holds one of the all-time top-30 win percentages for a coach in Division I baseball history. With over two decades of coaching success at Rice, the legacy of Wayne Graham will forever be a part of Rice baseball.