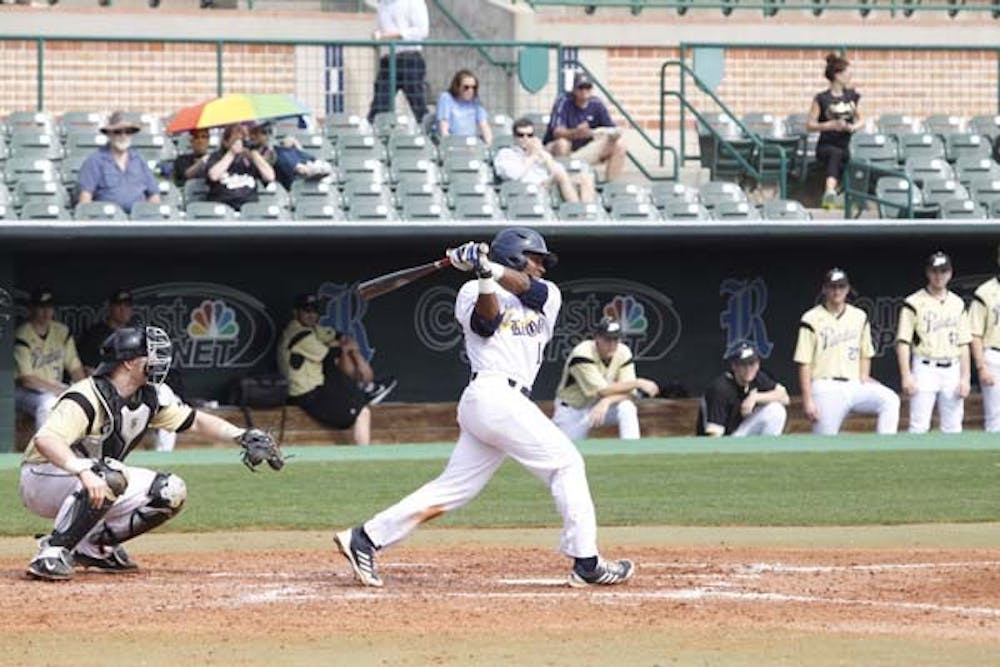 
Sophomore shortstop Leon Byrd takes a swing against Purdue University during the final game of the series Sunday, Feb. 23 at Reckling Park. The Owls won the game 23-3. Rice will head downtown this weekend to take part in the annual Minute Maid College Classic.

Rice University earned its first series sweep of the season against Purdue University, which started Friday, Feb. 21 and ended Sunday, Feb. 23. Sunday’s 23-3 win against the Boilermakers marked the Owls’ biggest offensive output since the 26 runs scored against the University of California, Berkeley in 2010.

Rice University earned its first series sweep of the season against Purdue University, which started Friday, Feb. 21 and ended Sunday, Feb. 23. Sunday’s 23-3 win against the Boilermakers marked the Owls’ biggest offensive output since the 26 runs scored against the University of California, Berkeley in 2010. The Owls scored 10 runs in the first inning to open up the game. Rice piled up 23 runs on 20 hits, including a grand slam by junior first baseman Skyler Ewing. Ewing is now batting .485 this season with three home runs and 17 RBIs.

Head Coach Wayne Graham said he is extremely impressed with Ewing’s start to the season and attributed his improvement to time Ewing spent in the Cape Cod Baseball League over the summer.

“Ewing has improved vastly in his mentality and approach,” Graham said. “The Cape Cod League helped with his confidence immensely.”

Senior left fielder Michael Aquino said Ewing has completely changed his hitting style, which has been a major contributor to his hot start.

“Ewing looks like a whole new hitter this season,” Aquino said. “He is a freak in the batter’s box.”

With the sweep against the Boilermakers, the Owls are now 6-2 in the season and are ranked No. 12 in the Baseball America Top 25 poll.

Graham said one of the reasons the team has gotten off to such a fantastic start is that the team chemistry is very strong among the coaches and the players.

“[The players] really like each other a lot, and the coaching staff is very [cohesive],” Graham said. “These players are pulling for each other.”

Aquino said everyone in the dugout is into the game, even those who are not playing that day. He said it gets the players excited and helps them stay confident and relaxed.

“With this group of guys, everyone in the dugout is active in the game,” Aquino said. “That really helps the team chemistry and sets the tone for the entire game.”

Rice is preparing for the Houston College Classic at Minute Maid Park, which starts Friday, Feb. 28 and ends Sunday, March 2. For the first time since its debut in 2001, the tournament only involves teams from Texas, including the University of Texas, Texas Christian University, Texas Tech University, Sam Houston State University and the University of Houston, along with the Owls.

Rice will play Texas on Friday, TCU on Saturday and Texas Tech on Sunday. The Owls played only Texas Tech last year, winning 11-2 at Reckling Park.

Graham said this is one of the strongest groups of teams he has ever seen assembled in the tournament’s history. He said he likes that all the teams are from Texas, since there is some great baseball being played in the state right now.

“This Minute Maid Classic is the strongest it’s ever been,” Graham said. “All of these teams are very highly rated, as seven Texas squads are in the top 35 teams in the country.”

Junior pitcher Zech Lemond said he loves going to play at Minute Maid, year after year. With only Texas teams in this year’s tournament, he said the stakes are even higher.