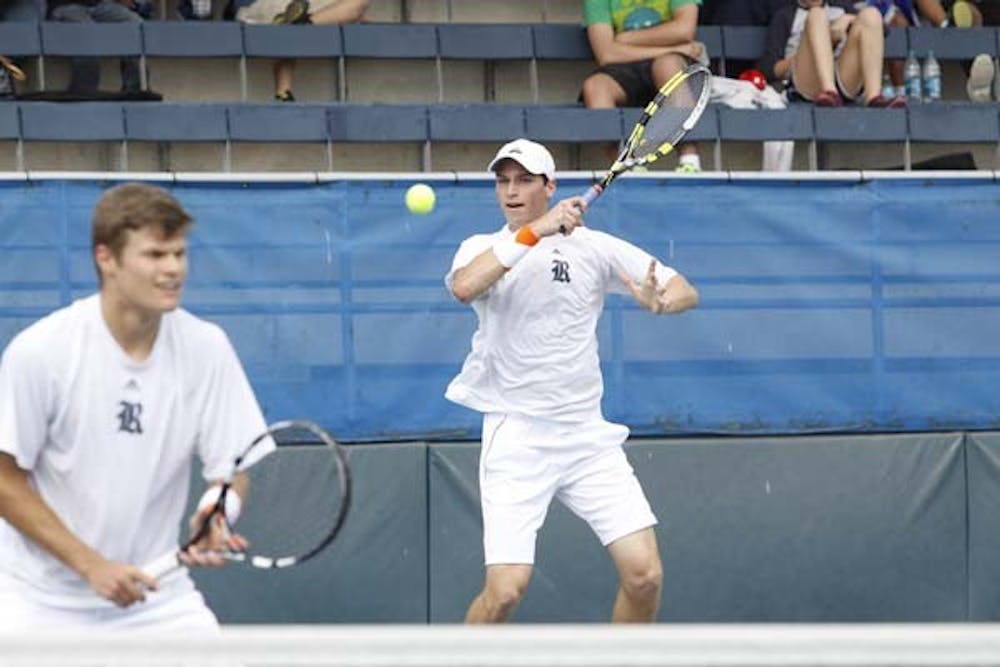 
Freshman David Warren swings a forehand against the University of Louisiana, Lafayette on Sunday, Feb. 23. The Owls lost the match 5-2, dropping to 2-7 for the season.

The Rice University men’s tennis team returned home to match play after a two-week break, playing the University of Louisiana, Lafayette on Sunday, Feb. 23. The Owls lost in a 5-2 decision. This upcoming weekend, the Owls head to La Jolla, Calif. to play in the Pacific Coast Men’s Doubles Championship, along with matches against St. John’s University, University of San Diego and San Diego State University over spring break.

However, the major news of the day came before the match even started. The team introduced their newest member, 3-year-old Bennett Nestor, who with the help of the Friends of Jaclyn Foundation is being treated for pilocytic astrocytoma, a form of brain cancer.

“With the help of the Friends of Jaclyn Foundation, a great opportunity came up for the team to be a positive influence,” Ustundag said.

Focusing on the game, Ustundag also said he was disappointed with the result last Sunday, despite the success at practice over the past couple of weeks.

“I thought we prepared well over the two weeks,” Ustundag said. “We worked on a lot of things that needed help. Unfortunately, the hard work didn’t reflect into a result. We worked a lot on doubles and could not deliver.”

Junior Srikar Alla recorded his first singles win of the season for the Owls, and sophomore Tommy Bennett secured his first win at the No. 1 spot in singles.

Bennett said the home crowd was a breath of fresh air compared to the past matches on the road.

“It was really great playing at one in front of all my friends at Rice,” Bennett said. “I like to try and use the crowd when I play, and it was that much better that the win came at the [No. 1] position.”

Reflecting on the loss, Bennett said it came as a shock that the team did not perform up to its potential against the Cajuns.

“Collectively as a team, we put together two weeks of solid practice, which was why the result was so surprising on Sunday,” Bennett said. “The team was very disappointed, but we sat down after the game and identified what we really needed to work on. Everyone on the team is so motivated that it won’t be long before the team starts clicking.”

Ustundag said the field at the Pacific Coast Championship this weekend will be a major test for the Owls.

“The doubles tournament we are playing this weekend is against a strong field,” Ustundag said. “We play [against some elite opponents] in USC, UCLA, Stanford, [the University of California-Berkeley] and San Diego. [These] are major programs [and] will all be challenging.”