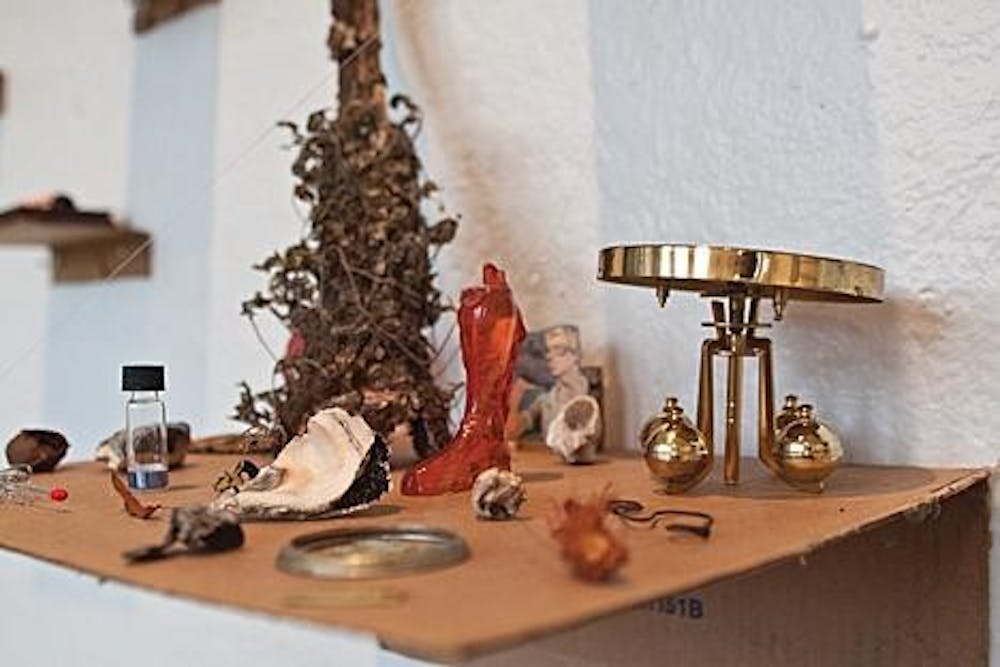 The show included an awards ceremony and reception, a film showcase, and a display in the Matchbox Gallery and featured "A5," the senior showcase located on the fourth floor of Sewall Hall. The exposition of senior art and film majors' work is, according to professor of visual and dramatic arts John Sparagana, a thesis of sorts, intended to represent the conclusion of students' year developing their art.

"All year is an investigation," Sparagana said. "The exhibition is meant to represent that year of inquiry and experimentation. In some cases, it's a culmination of what's been going on all year; in some cases, it's a mix of things; sometimes, it's very last-minute."

Sparagana said the use of the studio as a gallery space is meant to convey the idea that the exhibition is an extension of the full year of development and exploration. The name of the exhibition, "A5," is derived from the label of the white paint that coats the fourth floor's walls and which students use to cover up any accidental paint splashes.

"Years ago, [the exhibition] was in the Rice Gallery, and it was very professional." Sparagana said. "It was just that students didn't have much control over the installation, and there wasn't much of a creative process in formulating the exhibition. So, in one sense it felt like a loss [to switch spaces], in that [the Rice Gallery] was such a showy exhibition space, but this has actually felt much more exciting for the students."

The exhibition, which will stay on display until May 11, takes up the entirety of the fourth floor of Sewall Hall and includes a diverse range of mediums - from film to organic materials to more traditional mediums. Sid Richardson College senior Jessie Anderson filled an entire room with sculptures constructed from made and found objects.

Anderson said she feels the exhibition is not intended to portray a particular theme, just each artist's personal style and approach to creating his or her art.

"I don't really have a theme, just a certain type of material [I use]," Anderson said. "I think, though, when people come in and see it, they see something coherent - my personal touch. I probably don't recognize it, like people don't recognize the smell of their own house."

"I didn't really use any kind of rules when designing [these pieces]," Biletska said. "I just kind of came up with it intuitively and went with it."

Unique to this year's exhibition is the addition of senior film majors' work to the visual arts majors' pieces. Six students chose to simply play their films on a loop, while the rest synthesized visual art and film by creating an installation. Lovett College senior Jennifer Dayrit, who made three short films parodying alcohol commercials, chose to complement her pieces with an installation around the screen intended to represent a stereotypically trashy bar scene.

"This is the first time film students have been included in the senior studio [exhibition]," Dayrit said. "But they asked us, and we said yes .... We're really excited to be [a part] of it."

While the official exhibition event is over, the senior film and visual arts majors' work will be on display on the fourth floor of Sewall Hal until May 11.