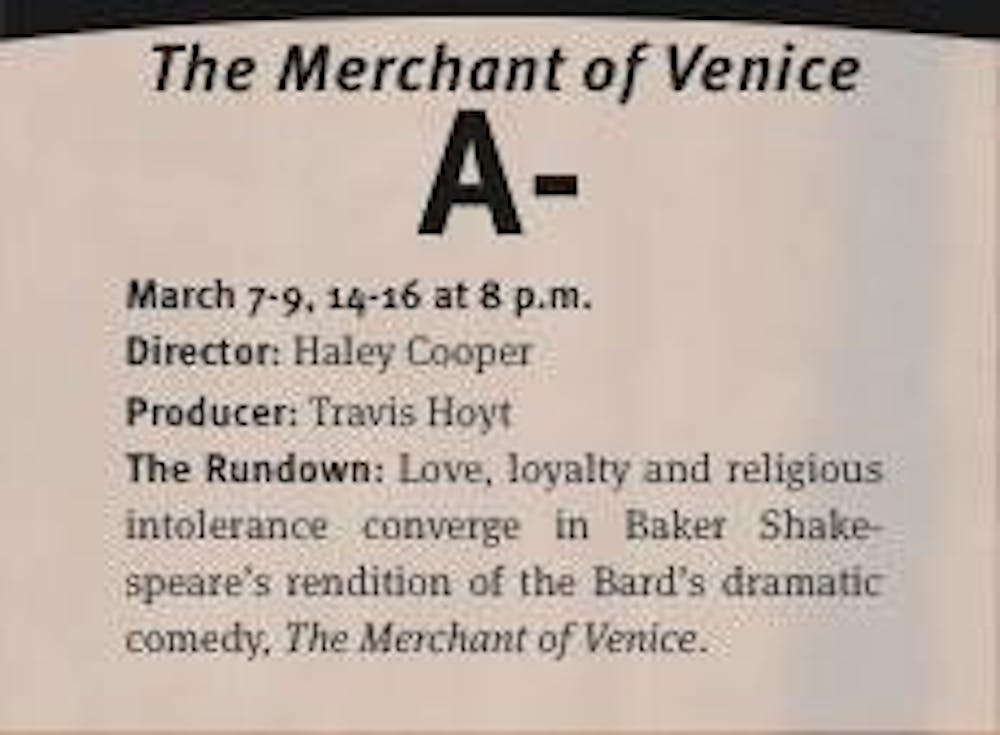 Last year's Baker Shakespeare cast and crew failed to impress in The Winter's Tale with both poor enunciation and technical execution. This year, under the command of Haley Cooper, who co-directed 2011's Hamlet, the cast and crew bid adieu to the execution flaws of yesteryear. Cooper and company tackle the Bard's controversial yet comedic play The Merchant of Venice in the 44th annual production of Baker Shake. Judeo-Christian tensions flare, and revenge and mercy take center stage in this three-hour production.

In The Merchant of Venice, Bassanio (Baker College senior Duarte Costeira) is in love with Portia (Hanszen College senior Nicki Pariseau), an heiress from Belmont bound by her late father's will to marry the suitor who correctly chooses from three caskets. To fund his overseas journey, Bassanio asks his friend, the merchant Antonio (Hanszen junior Omar Tariq), to make a bond with moneylender and Jew Shylock (Sid Richardson College senior Alex Karge). Antonio, a Christian, begrudgingly agrees to a deal with Shylock: 3,000 ducats for three months, and if he does not pay it back, Shylock may cut a pound of flesh from Antonio's body. Though Bassanio chooses the correct casket, he hurries back to Venice with a heavy heart when he learns Antonio was unable to repay the loan. Antonio's life is on trial, but Portia, disguised as a lawyer, intercedes and saves Antonio

From the expressive lovers' interactions to the earnest asides and monologues, each scene is executed with 16th-century flair. The actors are as easy to hear as Shakespeare's plot is to follow. Casting is spot-on for the comedic personas Lancelet Giobbe (Baker junior Travis Hoyt) and Portia's suitors. Hoyt is a crackup with his impeccable comedic timing and voice alterations. Reynaldo Valdez (Hanszen '06) as Prince of Morocco is a big presence onstage. He delivers a hilarious performance with his overconfident hand gestures and thinking process as he selects a casket. Michael Paras (Jones College '12), who also excels in his opening monologue as commedia dell'arte Arlecchino, plays the Prince of Arragon. He struts confidently onstage, unfazed by his short stature as he measures up next to Portia. Paras' height discrepancy adds just as much comedy as his quick dialogue and exaggerated facial expressions do.

Costeira offers a convincing performance as an earnest suitor whose love for Portia is matched only by his loyalty to Antonio. Tariq and Pariseau are supported by a passionate right-hand man and woman, respectively, whose subtle sass, whether an eye roll or a sarcastic shriek of delight, is a welcome break to otherwise tense or overly affectionate scenes. Tariq himself, however, seems devoid of emotion. Even when he spits in Shylock's face or his life is on trial, he is too illogically even-tempered. Pariseau, a veteran of Rice University theater, gives a solid performance in her role as Portia. Her giddy interactions with her waiting-maids and expressions of disgust at the suitors are compelling behaviors of a rich heiress. Unfortunately, her performance as the lawyer falls short. What should be commanding and notable protofeminist performance, especially with Shakespeare's "Quality of Mercy" monologue, ends up a mild necessity to move the play along.

Karge as Shylock delivers the standout performance of the play. Plaudits on plaudits go to Karge for his acting as one of Shakespeare's most ambivalent, complex and memorable characters. Karge dwarfs his Christian counterpart Tariq in personality and passion. Beyond his his obviously fake beard and moustache, his patronizing happiness when Antonio needs his help, his bitterness toward the Christians, his miserly condemnation of his daughter, and his merciless rhetoric in court all contribute to an entrancing performance. Karge especially does Shylock justice in his performance of the famous "Hath not a Jew eyes?" monologue. Karge's controlled conviction, resentment and spite effect an ambivalent response to his

The subplot of lovers Lorenzo (Baker freshman Ethan Agrawal) and Jessica (Lovett College freshman Nicole Moody) is weak to the point that it is expendable. Agrawal is sweet but forgettable, and Moody's constantly forlorn demeanor is an irksome interpretation of Shakespeare's arguably most callous character of the play.

The simple set of a wide stage, with the occasional table or chaise, and gray brick bridge facade gives prominence to the characters and costumes. A cutout of a town or a castle silhouette frames red curtains and is an ingenious yet understated backdrop for every scene. Lighting design by J. Cameron Cooper is as simple as the set but effective in its use of broad and spot lighting.

Transitions are demarcated by corny Renaissance music, which emanated through the dark Baker Commons from speakers behind the audience. Live music from the onstage guitarist (Bryce Eakin, Brown College '08) and recorder player (Joseph Lockett, Hanszen '91)

From the bosom-bearing hoop-skirt dresses to the Venetian ribbon-laden capes, hats and breeches, the costume construction is intricately detailed and works well to coherently complement or hysterically subvert each character's either regal or lewd personality.

Overall, both the cast and crew have the endurance and expertise to deliver an excellent rendition of The Merchant of Venice. The cast is impressive and versatile, and the plain use of set and lighting elegantly complements the action on stage.